(Here are some photos from the Johnny D’s party.)

Booty Vortex was the perfect booking choice for Halloween Night at Johnny D’s. They’re a rocking disco/funk band — a bunch of great musicians having fun. (You can hear samples on their website, BootyVortex.com.) 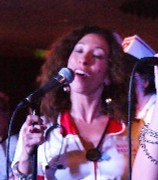 Wearing a foxy nurses’ costume, singer HoneyChild got everyone hopping as the band launched into tunes like “Lady Marmalade” and “Disco Inferno.”  Waitress Jenny came dressed as a cowgirl.  Marie came as a toddler.  Craig was dressed like the Beatnik he really is at heart.  There was a contest for best costume, but even those who didn’t win an offical prize still won on the dance floor as Father Time got his chance to dance with a Slutty Stewardess, and the guy with the pencil head danced the Hooter‘s Girl. People were dancing and partying all night.  (If you missed this party, Booty Vortex will be playing at the club again on New Year’s Eve.)

Our youngest waitress, Nikki, came dressed in prison garb.  The letters on the back of her shirt originally read “Dept. of Corrections“ — but John Bonoccorso couldn’t resist making one small alteration. While the staff finished the set-up he grabbed a sticky-note pad, wrote down the capital letter “E” and then made like he was simply patting Nikki on the back. 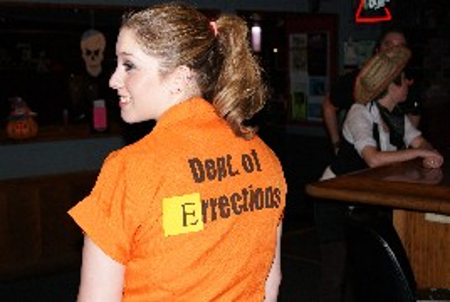 Nikki was a good sport when he finally told her, and she let him snap this picture.  She took the yellow “E” off before the party began . . . too bad, because she would have made ridiculous tips if she’d left it on.

John has worked on the bar with me at Johnny D’s for years — he recently moved up to general manager. Owner Carla DeLellis and her husband Sean have four kids, ages 8 – 16.  John will give them have a little more time with their family, but they‘ll never change his sense of humor.  (You can take the bartender out from behind the bar, but you can’t take the bar out of the bartender.)

Will Henry (right) both wanted to come as Boston Celtics star Rajon Rondo.  Neither would give in, so they came wearing the same costume.  They got a referee‘s shirt for me wear in the middle.

Will and Jeremy are roommates.  They’re both in their twenties and they‘re bartenders at a nightclub. I wish their landlord and their next-door neighbors good luck.

Below are a few more photos from Johnny D’s Halloween Night.

(We’ll be adding everyday pictures of other bars, restaurants and nightclubs from across the country.  You’ll be able to view them by clicking the “Photos” and “Videos” links on the black navigation bar at the top.  Right now the pictures are only from Johnny D’s . . . but that’s your fault isn’t it?  Send us yours!  See “Contact Us” for details.)

Back with more stories about life on a cocktail napkin next week. 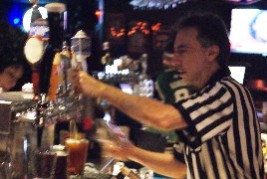 Mike Q (still bartending, after all these years)

Nikki and Jenn, the cowgirl 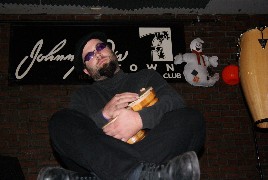 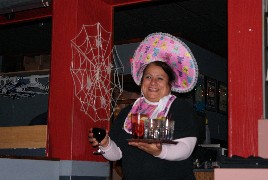 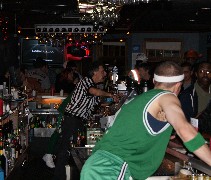 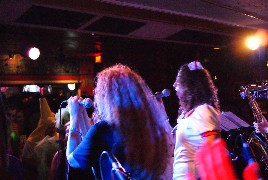 Booty Vortex from the stage

One Response to JOHNNY D’S, HALLOWEEN 2010