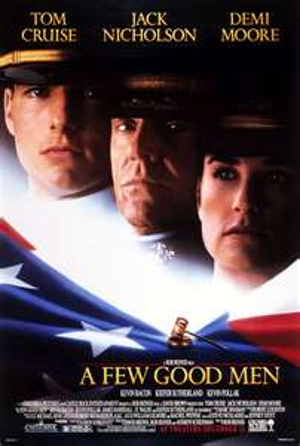 The idea for this week’s post comes from comrade-in-arms Scribbler50, author of one of my favorite blogs, Behind the Stick.

I got this email from Scribbler the other day:

“Hey, Mike, I just read something in the New York Daily News you might get a kick out of . . . It‘s an article about Aaron Sorkin and how he wrote his first few plays (including ‘A Few Good Men’) on cocktail napkins.

. . . It’s a good read and maybe something you can turn into a post.

Aaron Sorkin . . . didn’t he just win an Academy Award for Best Adapted Screen Play, “The Social Network?” And he started out writing on cocktail napkins? I had to check it out.

It turns out that after graduating from Syracuse University Aaron moved to New York City, where among other jobs he worked as a bartender (just like Scrib). Aaron later recalled his life behind the taps at The Palace Theater:

“A Few Good Men” — I always liked that movie, and like it even more after hearing the story behind it.

I’d already used another Aaron Sorkin/cocktail napkin tale in the “About this Blog“ section on the right of your screen. 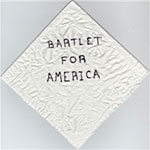 In the TV series, The West Wing, a political insider wants his best friend, Jed Bartlet, to run for President.  He grabs first thing he can find to write down the slogan “Bartlet for America.”

Bartlet (played by Martin Sheen) does become President and later has the cocktail napkin put in a small picture fame.

I began looking for other famous cocktail napkin stories.

It seems that in the early 1960s, a local DJ in Los Angeles was at an all-night diner with Jan Berry, of “Jan and Dean” rock-and-roll fame.  DJ Roger Christian began scribbling down the lyrics to a new song on a napkin and “Honolulu Lulu” became a hit for Jan and Dean, rising to #11 on the national charts.

Southwest Airlines supposedly got it’s start on a cocktail napkin when a business man and an airline pilot were having a drink together in a San Antonio bar. They began discussing an idea for an airline that would provide short intrastate flights at a low cost. As they sat at the bar they developed a business plan, mapping out potential routes on cocktail napkins.

In 1974, economist Arthur B. Laffer of the Office of Management and Budget was in a downtown Washington DC bar having a drink with Jude Wanniski of the Wall Street Journal and Dick Cheney, then deputy White House chief of staff.

Mr. Laffer sketched out a diagram on a napkin to explain how lower taxes might spur economic growth. His “Laffer Curve” and the theory of supply-side economics became famous during Ronald Reagan’s Administration.

“Marilyn never lost her insight, her passion, and her humor. To confront the mounting difficulties of her life, she wrote – on everything — cocktail napkins, cheap drugstore notebooks, and stationary from fancy-schmancy hotels.”

The grand design of Chicago began on a cocktail napkin. In 1905, a relative of movie critic Roger Ebert was having a drink with then Chicago big-wig, Daniel Burnham.

From the Chicagoist, we learn:  “Over cigars and cognac with Daniel Burnham, Hieronymus Ebert— Roger’s great-great grandfather—inadvertently inspired Chicago’s famous grid system of streets after drawing a tic-tac-toe game on a cocktail napkin.”

Tennessee Williams worked as a waiter early in his playwright career. You can’t tell me he didn’t jot down a writer’s note or two between serving tables.

But my personal first choice for a great cocktail napkin story isn’t famous at all. It‘s just something that happened at Johnny D’s, on a night that only two people will ever remember.

Dan Ehrlich has been coming into Johnny D’s for years, but it was a long time before I actually found out what he did for a living. He talks about everything and anything, and always asks how I’m doing with my book, but he never talks much about himself.

Yesterday, I found this on the internet — it’s from page twelve of the Boston University Department of Biomedical Engineering Annual Report, where they highlight their faculty:

“Dr. Dan Ehrlich joined the department in October, 2008 as a Research Professor. Dr. Ehrlich comes to us from the MIT/Whitehead Institute where he was a Principal Investigator and Director of the BioMEMS laboratory. Prior to joining the Whitehead, Dr. Ehrlich spent 18 years at MIT’s Lincoln Laboratory.”

It seems Dan’s research “. . . spans optics, lithography, biosensors and biomolecular assays, with a current emphasis on microfluidic instruments for highcontent, high-throughput cell-based assays and deep-UV imaging.”  Huh?  Oh, he also has 23 issued patents and over 230 publications, . . . and he won the R.W. Wood prize from the Optical Society of America for the outstanding discovery in the field of optics in 1991.

If you were tending bar with Dan sitting there, you’d never guess any of this. If he’s going to say anything about what he’s doing, Dan will talk about his travels to Asia or his passion for photography. When I sent him an email to tell (warn) him about this upcoming post, he was in Burma.

“I am totally enamored with Burma (Myanmar),” Dan wrote back. “The main reason is the people who relate to strangers in a natural and organic way. Their interest in you is as a human being first. Their rituals are fantastic.”

But, back to the main story . . . I remember the night at Johnny D’s when Dan seemed preoccupied. He’d just finished his dinner and was now sipping a cold IPA when he began scribbling like madman on a pile of cocktail napkins.

Months later Dan told me what he’d been doing on those paper napkins. He had been designing a laser. He’d been developing a business plan to start building and selling lasers.

Dan followed through with the plan, but the business end of it finally made him lose interest. He became tired of the daily personnel crises in his new high-tech company and eventually sold it to the publicly-traded company, FEI Corporation.

I’m sure with all the bars and restaurants there are in America and across the world, other customers — somewhere, at some point — may have sketched out the design for a laser on their cocktail napkin. But did their design actually work? Did they build functioning lasers?

But for me, the key difference between Dan and them is that I wasn’t their bartender as they jotted down their plans. 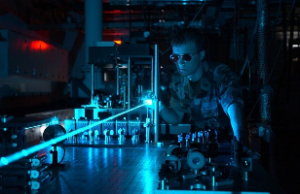 Dan politely said he was sorry he couldn’t help.

After I’d completed my online research, I emailed Scribbler50 back to thank him for suggesting this post.

With a history of famous cocktail napkins fresh in my mind– now I don’t feel so dumb for saving all the notes (boxes full of them) that I’ve pulled from my pockets over the years. Who knows what hidden gems might be found on the unread ones?