A LETTER FROM JOEY

I generally listen to Colleen.  She’s my best friend and one of the brightest people I know (graduated with a 3.8 from Suffolk University.)

As we talked on the phone yesterday afternoon, I was telling her what I had planned for the blog this week.  It’s a story about an old letter I’ve kept over the years.

“I don’t think you can use this,” Colleen said after I’d just begun the tale, “No one will believe it.”

OK, I guess I have a problem.

Listen, for those of you reading I know what I’m about to say will probably sound strange.  It is a little out there, but it really did happen, just this way . . . and now I feel obligated to tell the story.

It began back at SUNY Cortland in upstate New York, when I was bartending at The Mug.

At that time, Joey (Joanne Payden) and I spent a lot of time together.  We met in college and became really close friends . . . and we had this weird mental connection.

It’s hard to explain, but sometimes she’d look at me and know what I was about to say . . . then beat me too it.  She’d say it first.

Sometimes it was a little unnerving.

Once, I swear I heard her thoughts just as she was about to speak  It was as though I heard the words inside my head before she said them . . . it was so weird.

I repeated the unspoken words out loud to her, holding onto the back of a chair because the room seemed to be spinning.  When I looked over at her, she was sitting on the bed with her arms wrapped around her bent knees, rocking herself back and forth.

“It scares me,” she said, “Whatever is going on with our minds.”

(Alright, that’s the place in the story where Colleen said I shouldn’t post it, . . . but I’ll ask you to bear with me, at least until we get to the part about the letter.  Then you can pass judgment.)

Back at Cortland State, Joey graduated and moved to Colorado, and somehow we lost contact.

It would take a guy named “Harpo” — and a trip cross-country to California and back — to put Joey and I in touch again.

Geoffery Last (everyone called him “Harpo”) showed up at The Mug around two years after Joey left.  He was an old frat buddy of mine from Beta Phi Epsilon and he was a wild man, with a full beard and shaggy head of brown hair.

Harpo had gone to Chicago after graduation to work for some large sporting goods corporation.  He wore a suit and tie, the whole corporate deal.

Two years later, he quit that job to become a crew member on some retired executive’s yacht.  He and the rest of the crew were paid to sail around the world.

When he came back, he bought an over-sized van and had the back end converted into comfortable sleeping quarters, complete with carpeting and surround-sound stereo.

He spent the next year traveling all over the United States.  He went wherever he wanted, and stayed as long as he wanted — all this before he turned twenty-five.

Now he was in Cortland to get me out of my “rut”, as he called it.

He had a plan that the two of us should move to Boston.

So I quit The Mug, leaving my good buddy Jim Fennell to run the place — Harpo and I drove to Boston to find an apartment.

While in Boston, we met two nurses and ended up staying with them while we looked for our own place.

We were at their neighborhood bar one night, when Harpo said it was too bad that I was going straight from Cortland to Boston,  . . . that I’d never seen the rest of the country. 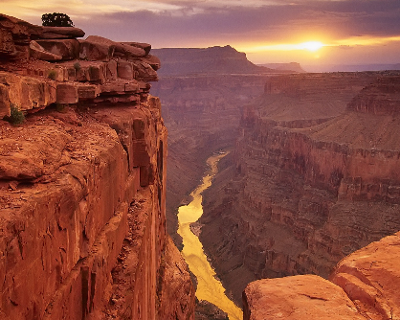 “He’s never been to the Grand Canyon,“ he said, as the nurses listened.  Neither of them had been there, either.

“You guys really should go at some point in your lives,” Harpo intoned, “It’s so amazing.”

A few more beers, and Harpo came up with a plan that we should all hop in his van and go see the Grand Canyon.

One of the nurses was leaving her current job, and she could take a month off before finding a new one.   The other nurse could take an extra week of vacation time . . . that gave each of them four weeks free.  Harpo and I had no commitments . . . what was stopping us?

Two weeks later the four of us were on the road, headed west in Harpo’s van.

“At least I’ll have a chance to look up Joey when we hit Colorado,” I thought when it was my turn to drive.  Before we left I’d gotten her phone number from her father in Binghamton.

“You know she’s married now,” her dad told me.

“I’m sure that won’t be a problem,” I said, “Joey and I were really close friends.”

When we hit the Rockies, it was  breathtaking . . . absolutely amazing. 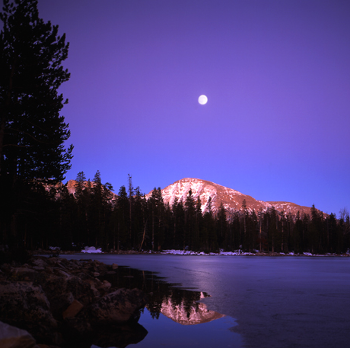 We stopped every night to cook dinner, camp out and get high.  It seemed we were always a little high during this trip, and there was plenty of cold beer, except when you were driving.

At the end of each night we took turns  — one couple stayed in the van, while the other had sleeping bags under a spellbinding night sky.

We finally hit the west coast and took a day trip over the border into Tijuana, where we shopped in a sprawling Mexican marketplace.  Everything was so inexpensive that we spent all day buying presents. 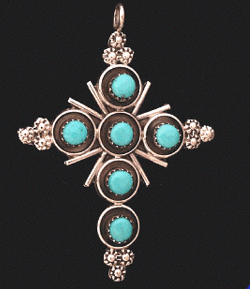 (This isn't the original silver cross that I bought for Joey, but it's as close as I could find.)

I bought something for Joey and her husband.  I found a native-looking silver cross with turquoise stones that I thought she might like, and picked-up a hand-crafted leather wallet for him.

Taking a southern route back to the east coast, we camped about an hour outside Denver, where Joey lived.

I had put off calling her until the last minute, and now I wondered about this surprise visit.  I hadn’t spoken with her in years.  It was an hour drive.  I didn’t know if I’d be intruding.

Suddenly this didn’t seem like such a good idea.  I kept thinking about it, turning the piece of jewelry I’d bought for her over and over in my hand.

“I have her number,” I finally told myself, “I’ll just call her when I get back East.”

That was it.  After planning the entire trip to look her up, . . . I didn’t go through with it.

Crossing back over the Rockies, we got snowed in.  It was the middle of August, but the mountain elevation outside the small town of Buena Vista was something like 12,000 feet, and there was a blizzard going on up there.  Eighteen-wheel tractor trailers were spinning off the road.

So we turned around and went back to Buena Vista.  We spent the night at the Green Parrot Hotel, where Harpo and I almost got into a fight with some townies in the hotel bar.  That would have been a mistake.  Some of those guys had loaded rifles hanging on the gun racks of their pick-up trucks parked out front.

By the time we made it back to the east coast, Harpo had decided that Hawaii would be his next stop.  I was headed for Boston . . . but ended up in Albany (it’s a long story; see Down the Rabbit Hole.)

In Albany I began working at The Lark Tavern, and week after week, month after month, I kept putting off that call to Joey  . . . until I’d pretty much forgotten about the idea.

Then, after eight or nine months in Albany, I came home from work one night to find this letter in my mailbox.  The letter was meant for me . .  but it had originally been sent “in care of” to my sister in Syracuse, NY.

The sender didn’t even have Cindy’s right address.  It was her name, but some other address much further down the road.  That person recognized Cindy‘s name, drove it up to her, and then Cindy forwarded it to me.

The letter was from Joey.

She was asking about a piece of jewelry.

She explained in a second letter.

“I had a dream a while back,” she told me, “It was sometime around last August.”

Joey told me that in the dream someone was holding out a piece of jewelry to her.  She couldn’t see the person’s face, but she knew the jewelry was somehow very important.

“It was a native Indian-type silver cross set with turquoise stones,” she said.  “It was such a vivid dream I haven’t been able to forget it.  I began thinking it might have something to do with you . . . that’s why I wrote.”

What are the odds . . . Joey having that dream around the same time I was in her area? Coincidence?  A dream in which I hold up a silver cross that matches the one I bought for her in Mexico . . . and that I was holding in my hand as I debated dropping in on her?

The whole thing is just weird.

“Where is Joey now,” Colleen asked when I finished telling the story.

“I don’t know,“ I said, “We exchanged those letters, talked on the phone.  I saw her once when she came back to upstate New York to visit her parents . . . . but over the years we’ve lost touch again.”

“I can’t believe it,” Colleen said, “What’s wrong with you?”

“You really do need to look up this woman again.”

I think Colleen is right.

9 Responses to A LETTER FROM JOEY