This isn't a photo of Johnny La La . . . I'm sorry to say I don't have one. But this guy's attitude and pose are right on the money. (Image from www.life.com)

A guy at the bar had the hiccups.

It was at Johnny D’s this past Saturday night and the place was packed.  I’d come over to ask the man if he would like another beer, but he was unable to answer.

I was off to get him some relief.

“God Bless Johnny La La,” I thought as I turned away.  Years ago at The Lark Tavern, Johnny had shown me a cure that never fails.

Johnny La La was a cranky, loveable old dinosaur of a bartender.  (Read more about him here.)  He was of a breed that has essentially vanished from behind the bar; I guess the mold has been broken.

Johnny wore a constant curmudgeon mask, and sometimes he’d have a quizzical — don’t you know anything? — look.  But he was always there when one of us twenty-year-old bartenders had a question.

One day at The Lark a customer had the hiccups, and I stood across from him helpless.  I told him to try holding his breath.

Two bar stools away, another customer recommended drinking a glass of water upside down.  (This might be the funniest cure to watch, if you’ve ever seen anyone try it.)

More customers chimed in . . . eat a teaspoonful of sugar; try standing on your head.

While all of us advised him, Johnny La La grabbed a cocktail napkin, a slice of lemon, and reached for the Angostura Bitters.

(If you’ve been in the business for a while you may already know this cure.)

Johnny placed the lemon wedge on the napkin, poured some sugar on top of it, and then generously splashed on the Angostura Bitters.

He told the customer chew on the lemon slice.

Of course it worked.

This cure has never failed.

That’s what Johnny told me, and that’s what I tell customers even today as I set the concoction before them.

I once read on the web about a man in England who spent a year in the hospital with unrelenting hiccups.  The doctors were dumbfounded.

You can read on Wikipedia about a young American girl who hiccuped for five weeks non-stop.  Read further and you’ll learn about a doctor who has had some success with a vegetal stimulator implanted in the upper chest of the patients.

To stop hiccups?  Doesn’t sound like something you want your bartender to try on you.

Back at Johnny D’s, I gave the man the cocktail napkin which held something less invasive.

“Chew on everything but the rind,” I told him.

Afterwards, in answer to his look of awe, I said, “An old-time bartender taught me that many years ago.”

Maybe the doctors should consult with Johnny La La before operating. 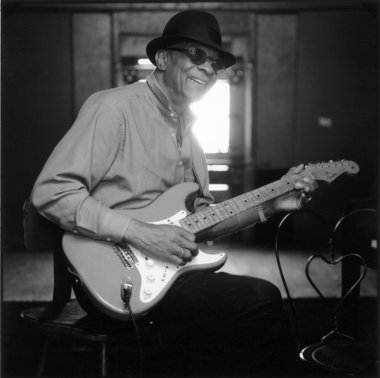 Speaking of a vanishing breed, the original blues musicians won’t be around much longer.  After Hubert Sumlin (then in his 70’s) played at Johnny D’s, one customer remarked,  “When guys like him are gone, there’ll be no one to take their place.”

Today all the pop stars are gorgeous.  Full of glitz, with special microphones that help them sing on key, their performances are as much about pageantry as about the music.

It’s as though they’re focused on formulas, techniques . . . doing what someone else has done successfully, repeating it with mathematical precision.

Not that their math is wrong.

But the old-timers sang from their hearts.  They played by ear.

Their music had soul.

There’s an old black man who stops in for the Johnny D’s Blues Jam now and then.  Mel is in his 70’s or 80’s, depending on who you ask, and he’s the real deal.  When he sings it makes you think that this is the way music used to be.

On a recent Sunday, Mel was on stage with some other veteran performers.  John Taylor on drums, Grant Kelly on guitar, Mike A on harmonica … and there was a new kid with them, a young man from the Berklee College of Music.

It was a study in contrast between the veterans, especially Mel, and the young kid just starting out.

This contrast was underscored as Mel was about to start his next song.  (I wasn’t on stage to hear, but Grant told me later.)

With one hand over the microphone, Mel had just informed the group what song he’d chosen and then he began to snap his fingers, “And a one, and a two, and . . .”.

Maybe what was going though Mel’s mind is what I just talked about,  . . . but he turned and looked at the young man.  It was only a quick glance.

“This one,” Mel said, then immediately turned to the microphone and started singing.

(For those who love the blues, click here for a video of Hubert Sumlin.)

This note is about some traditional folk wisdom.

David Hayden is author/creator of the Hospitality Formula family of blogs.  (I mentioned his new book, Tips2 (squared) in an earlier post.)

Last week in Restaurant Laughs, David had a great little story about the delicate dance between customers and servers.  (Post title:  “I’m sorry.  I’m still kinda new to this.”)

It was a perfect restaurant vignette, . . . but there was something in the comment section that also struck me.  David went on to talk about his philosophy of blogging.

He said there are enough blogs out there already that simply rant.  Talking about his attitude towards writing, and his customers, he explained that he prefers stories that offer something more than a complaint.

He said there was a poster above his computer that keeps him on track.

Printed on the poster are a few words from 1930’s folk singer Woodie Guthrie (“This Land is Your Land”).

I hope Mr. Hayden will forgive me if I repeat those words here:

“. . . But I decided a long time ago that I’d starve to death before I’d sing any such songs as that.  The radio waves and your movies and your jukeboxes and your songbooks are already loaded down and running over with such no good songs as that anyhow.”

Back next week with more life on a cocktail napkin. 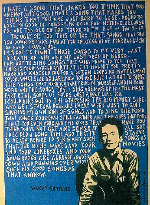 (Ed. Note, 8/11:  In his comment below, David Hayden was kind enough to send a link to the actual poster.  For a readable version of it, click here http://hospitalityformula.com/a-food-critic-intervention/08/guthrieposter/)