On Sundays, I’m behind the bar for the Blues Jam at Johnny D’s — it’s not much money, but there’s always good music and good people.

This past Sunday, regulars John (drummer) and Grant (guitar) played some rocking sets. Dan (also a drummer) stopped in, as did another Dan (harmonica) with his lovely lady, Ashley.

Then Mike Daley walked in.

I hadn’t seen Mike in almost a year.

He must have lost twenty pounds. He looked tired and worn down.  His face was a little distorted and swollen along the jaw line.

Before I go further, let me say this isn’t a sob story. Sometimes a customer will talk about his or her illness, and sometimes no matter how much you might sympathize, it’s difficult to listen as they go on and on. You still have to deal with other customers and everything that’s happening behind the bar.

Mike was different. “They had me down on the floor twice,“ he said, using bar-fight imagery to describe the sudden onset of the cancer, and then the chemo and radiation treatment that followed.  “They had me down twice but they couldn’t keep me down. I got up, and I’m still here.”

There was no self-pity in his voice. He was just filling me in on the details, which I wanted to know. 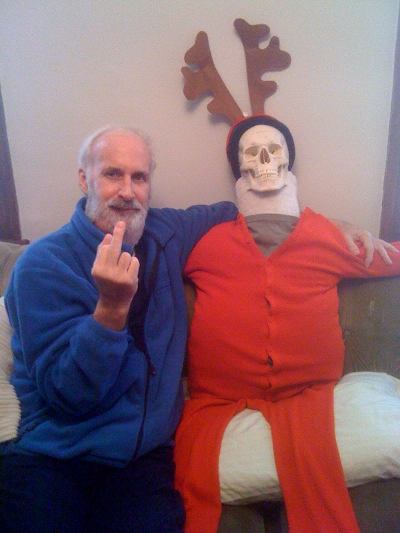 Mike Daley (Mike’s friend in Florida was busting his balls about having to spend the winter in New England, wearing long johns and staring Death in the face — so Mike sent him back this photo.)

He told me that his girl friend in Florida (where he’s been living) took a leave of absence from her job to stay with him while he got treatment in Boston. He talked about the side effects of radiation therapy. He said that he now had a tube inserted into his stomach that comes out through the intestinal walls and his skin. The tube ends with an IV connection on the outside so he can attach cans of liquid nutriment. It’s the only nourishment he can take, although he’s just now beginning to chew soft foods.

I was thinking that listening to this while working behind the bar wasn’t as awkward as it might have been — Mike kept cracking jokes about his treatment, about his doctors and himself. He still had his non-stop sense of humor. His cancer was something that happened, and now he was fighting back.

I was the only bartender while we talked. One of the waitresses came up to order drinks just as Mike was telling me about the tube, and I had to break away for a minute. Two customers at the other end of the bar wanted menus. Each time, I’d go back and talk more with Mike.

Then the conversation turned to the old days, and we rehashed some of the stories from when Mike was living in Boston.

Back then Mike worked at  MIT’s Draper Lab. He was a CAD (Computer Aided Design) Supervisor working on the Trident and Peacekeeper missile systems.

Mike had separated from his wife, although he still doted on his two young daughters, so we began to see him more and more at Johnny D’s.

He’d come in with his buddy, Jack, who also worked at MIT. Mike was a CAD specialist involved with top USA military projects, and Jack — well, Jack jokingly described himself as a custodial engineer. He was a janitor at Draper Lab.

Somehow the two of them became friends. Jack had wit and humor that easily matched Mike’s own. Mike was a member of the Faculty Club at MIT, and even though Jack could never be a member he’d always go there as Mike’s guest. 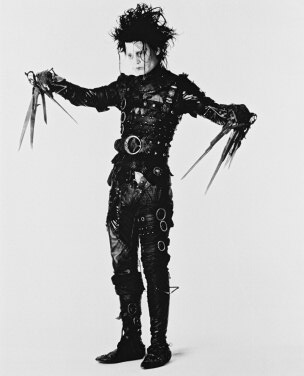 Jack had been born with only three fingers on each hand. His paws had a kind of Edward Scissorhands look. But he was so sharp and funny that he disarmed everyone immediately. After the first few minutes you didn’t notice his hands, or how difficult it was for him to just pick up his drink.

Let me give you an example, something so typically Jack. One afternoon he was talking with his next-door neighbor who had recently purchased a large attack dog. The guy who sold the dog had stopped by to see how things were going. I guess the guy made a six-month check up on all his customers.

Jack slowly lifted his scissor-like hands, with three fingers on each, and said, “Well, no . . . not after that first day.”

The guy’s face turned ash white before Jack told him that he was just kidding.

That’s what Mike and Jack did; they were always joking, always busting balls.

I’ve told a few stories about busting balls in this blog — Auntie Rosie, The Cute Blonde Nurse and After-hours at Cindy’s. One night, Mike broke my chops as much as they’ve ever been busted behind the bar.

That night Jack left early, and as he exited the front door Mike suddenly became serious.

“I’m worried about Jack,” he said.

It was a fairly busy night and I had to spin away to make someone’s drinks.

When I got back, I asked Mike what he meant.

“I shouldn’t have said anything,” Mike told me.

For the next hour, Mike gradually filled me in each time I rushed back from making drinks. The information he gave me came one piece at a time.

Jack was in danger of losing his job. “There’s a big shake-up going on,” Mike told me, “I think they’re going to let Jack go.”

This went on for an hour, piece by piece. Mike told me about a new woman who had recently been hired, a woman named Mary. “Sure, Mary comes in exactly at eight AM., but what does she accomplish after that?”

“I know Jack isn’t the type to go by the clock,” Mike said, “He’s always late. But when he gets there, no one does more.”

Mike told me that he was worried about Jack. This job was important to him, not only for the benefits and a weekly pay check — but the job was a big part of Jack’s self-esteem. Jack loved that fact that he was employed by MIT. Mike was worried what would happen if Jack lost that.

“He’s said something once about suicide,” Mike told me.

I was feeling sick about all this as I continued to work the bar, dashing back to Mike whenever I had a free moment. Jack was a great guy. Mike said Jack might kill himself.

I began thinking of taking up a collection for Jack. I wondered about finding work for him at the club, maybe checking ID’s. I was desperate.

“I’m sure it’s not an easy decision for the big shots at MIT,” Mike went on. At this point I should have smelled something fishy, but I had swallowed it all, hook-line-and-sinker.

I never saw it coming.

“I don’t know,” Mike continued, “I mean what would you do if it was your decision?”

“Tell me,” Mike asked, “What would you do if you had to lay one of them off.”

“Who would you let go?” Mike asked.

It took a minute for this to sink in, what he’d done to me.

“Would you lay Mary, . . . . or Jack-off?” Mike had tormented me for an hour, he had me worried sick about Jack . . . he had created a fictional Mary and phony lay-offs just to pull that punch line on me.

He’d probably heard this as a joke somewhere, and thought that Jack’s name was too perfect not to pull it while I worked.

To this day, that’s the worst anyone has gotten me behind the bar.

Anyway, it was great to see Mike again. He’s in a fight for his life now, but it was good to see that underneath he’s the same old Mike. He looks different; he’s thinner, worn down, but the same tough, funny bastard continues to shine through.

I got an email from Mike on Monday, and he sent me the picture of him and the red-suited mannequin shown earlier. He’s improving every day.

I’m sure he’ll stop in again before he heads back to Florida, if for nothing else than just to bust my chops.

14 Responses to MIKE DALEY and JACK