NO PIZZA! (The way things are done) 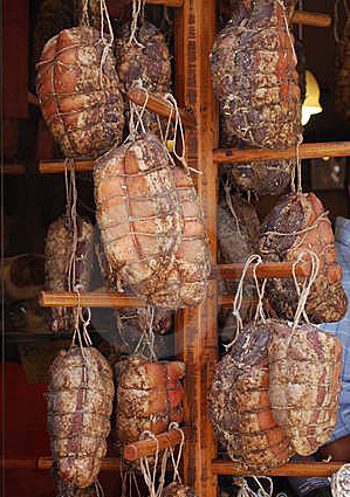 Sal’s shop was just down the street from The Cantina Italiana.  Sal was one of our regulars at the bar.  He was a tough man who had grown up in Boston’s North End, all the local wiseguys were his friends . . . but he wasn’t a gangster himself.

Sal made his living selling meats; his shop had the best cold-cuts in the city.  Thick slabs of imported Culatello, Mortadella, and Capicola hung from strings behind the counter.  All day long people lined up to pick and choose what they wanted in their sandwiches, or to take home.

Sal decided that he should also sell slices of pizza.  There was a small pizza shop directly across the street, and Sal was tired of people buying a sub from him, then leaving to get their slices.

I remember stopping at Sal’s shop and seeing the new pizza oven from Chicago, still sitting in its large crate in the back kitchen of his store.  “I should have done this years ago,” Sal told me, arms proudly folded across his chest.

Sal’s shop was a family business and his 15-year-old daughter was often behind the counter after she got out of school.  One day she was in the store by herself when a shaky junkie walked in with a gun.  The guy put the barrel of the gun to Sal’s daughter’s head, and demanded what was in the register.

Sal immediately rushed back to his shop when he heard, and after checking on his daughter, he went ballistic.

I remember he stormed into The Cantina looking for Joey Cigars (Joey was a reputed mob guy — click here for a story that took place after this happened.)  Sal was so pissed and red-in-face I thought his head was going to explode.

Joey wasn’t there, so Sal went down to the coffee shop looking for him.  He stood at Joey’s table screaming at him for allowing something like this to happen in the neighborhood — not what I’d recommend, but Sal had known these guys since he was a kid.

“What are you doing?” Sal screamed at Joey, “This is the way you run the neighborhood?  A guy puts a gun to my daughter’s head . . . IN THIS NEIGHBORHOOD?”

“Go home,” Joey quietly told Sal.  “Calm down and go home.  Someone will be over to see you.”

Not long afterwards there was a knock on Sal’s door.  A guy standing there told him the name of the junkie, and where he lived.

Sal called a few of his buddies and they took off in two cars to the junkie’s apartment building.  There was a cab outside the building when they got there, the motor running and the guy’s girlfriend already inside it.

They saw the junkie run out of the building and hop into the cab, but before it could pull away, one of the cars screeched up in front of it, blocking their escape.

The girlfriend jumped out one side and started running, but before the junkie could get away Sal and his friends grabbed him.  They had guns.  They threw him against the side of the vehicle.

Sal and his friends hustled the guy into the back seat of one of the cars.  As they barreled away, three of them were beating him while they tied his hands and feet together with thick rope.

They were driving back to one of their homes in the suburbs.  On the way, they drove across a bridge that passed over Route 93, an eight-lane highway.

They stopped on that bridge.  Someone had an idea for using the remaining rope.

They tied one end of the length of rope securely around the guy’s ankles, then they dragged him out of the car.  The others motorists on the bridge were honking their horns and swerving to avoid this car haphazardly parked on one side.

They dragged him to the edge of the bridge, and lifted him over the railing.

The junkie was dangling from the bridge at the end of the rope, with all the traffic speeding by below him.

He swung back and forth by his feet over the highway.  His mouth had been taped with duct tape, but even from above they could hear his screams.  He was so terrified his pissed himself; his pants were soaked.

Sal and his buddies pulled the guy back up over the railing, stuffed him into the back seat, and continued to the suburban home.

Once there, they took the junkie down to the basement.  They sat him on his ass, untied his hands, and then retied them behind him around a pole.  They took off the guy’s shoes.

Then they sat at a folding table in the basement and began playing cards, and drinking.

The guy’s chest was shaking with his sobs, which were still muffled by the duck tape.  Tears were running down his cheeks.

After that, anytime one of them got up to go to the bathroom or get another drink, on the way they’d stop to pick up one of his shoes, and hit the guy hard twice in the face with its heel.

They did this for over an hour.

The guy curled into a whimpering ball, the only thing holding him up was the pole.

Finally they lifted the junkie up and drove him to East Boston, the Hispanic section.  They untied his hands and feet, and dumped him out of the car with the front of his pants still wet.  He was stinking of urine, and barefoot.

When I first heard the story, I figured Sal was in serious trouble.  Later it turned out that the judge was extremely lenient.  Sal got a slap on the wrist.  The judge considered the mental state Sal must have been in — the guy had put a gun to his daughter’s head.

Sal got a suspended sentence.  He didn’t spend a day in jail.

“Gotta walk on eggshells for a while,” Sal told me later as I worked behind the bar at The Cantina.  “I’m on probation,” he said.

A week later I was surprised to see two new signs up in the front windows of Sal’s shop.   They were rectangular, white cardboard signs about ten inches long and four inches high, sitting at the bottom of each window.

It seems that one of Joey Cigar’s guys had come over to see Sal right after the judge let him go.

The guy told Sal that his cousin owned the pizza shop across the street.  “He’s not really my cousin,“ Joey’s guy told Sal, “It’s on my wife’s side.”

He told Sal that he hoped he would think it over before starting to serve pizza.

No pizza.  That unopened crate with the pizza oven was shipped back to Chicago.  But Sal continued to have lines of people waiting for his cold cuts, and no one ever bothered his shop or his daughter again.

13 Responses to NO PIZZA! (The way things are done)