First, let me tell you what this post will not be about.

This won’t be a “bartender for the stars” kind of thing — how I made their drinks and became their best friend.  I’ve met lots of celebrities and athletes while working, but certainly no more than anyone else behind the taps.

But today I’m thinking of some of the famous people I’ve served, and how what happened revealed something about them.  (It’s the athletes that always interested me most.  As an amateur boxer, I was encouraged by my coach to stick with it and and turn pro — I never did.  Now when I meet a professional athlete who had the drive and talent to make it to the top, I’m curious what they’re really like.)

I was behind the bar at The Cantina Italiana, in Boston’s North End, when a legendary Boston athlete took a seat.  I won’t reveal his name, only that he had played for the Boston Red Sox and was a Hall of Fame kind of guy.  I’ll call him Famous Athlete (F. A.).

F. A. was instantly recognizable, and quite comfortable with that.  He had the quiet confidence of a man who knows that everyone looks up to him.

“This one’s on the house, F. A.,” I said as I set down his beer, “It’s a pleasure to serve you.”  We shook hands.  He had an unassuming air, as though he was just a regular guy who enjoyed meeting other regular guys.

F. A. was there to meet an account executive from a local radio station.  They wanted to feature him in an up-coming advertising campaign.  He talked mostly about what it was like now that he was retired . . . but of course the conversation drifted back to some of his great moments in the game.

A while later, a young man in his early twenties came into the restaurant and walked directly to where F. A. was sitting at the bar.  He was wearing an expensive suit and tie, and was accompanied by a very pretty young blond.  I was at the service station giving a waitress her drinks and didn’t hear the exact introductions as they all shook hands, but when I came back I noticed that the guy and the young woman were both wearing wedding bands.  From their body language and behavior, I assumed she was his wife.  (Maybe she’d heard that he was meeting with F. A. and had asked to come along.  Did the kid mention this to F. A.?)

With F. A. in the lead, the three of them followed our tuxedoed host to their booth, . . . and once there F. A. stepped courteously aside to allow the young lady to slide in.

Then F. A. smiled, and sat down next to her.

The young man stood there for a moment.  He looked confused..  F. A. was sitting next to his wife on the same side of the booth, . . . and now he was just standing there.

The young man continued to stand there.  He looked a little upset, as though he didn’t know what to do, or say.

Then he sat down by himself, on the other side.

As I glanced over at them from behind the bar, I could see the whole thing unfolding.

F. A. did most of the talking, and now he was talking more to the young lady than to her account executive husband.  Then F. A. reached back and put his arm around the wife’s shoulder as he told a story.  Everyone laughed, but the young man was clearly not comfortable with this.

But he did nothing — maybe because of his job, he didn’t want to lose the account, or maybe he just didn’t know what else he could do — but he sat there and watched as his young wife was being hit on by a legendary sports figure.  His face was that of someone trying to smile while they’re being tortured.

I kept glancing over at them when I wasn’t making drinks.  It was like being unable to look away while watching a train wreck. 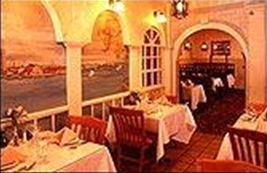 At one point — when the young man went to the men’s room — F. A. and the woman both had their cell phones out, as though comparing them.  They leaned close with the phones held next to each other and laughed as they continued their conversation.  (I thought she was blushing a little.  Did they exchange phone numbers?)

Both phones were put away by the time the young man returned.

When they all left, F. A. turned and gave me a short wave . . . a customary wave to the bartender.  I forced a smile, and nodded my head, but all I was thinking was, “Man, that was low . . . you really shouldn’t have done that.”

I met other famous athletes while bartending at The Cantina — Kevin McHale, K. C. Jones, and Larry Bird from the Boston Celtics.  Brad Park of the Boston Bruins became a personal friend of our owner, Fiore Colella, and he sometimes brought in Mike Milbury along with half of the Bruin’s team.  When I first came to town, one of our waitresses at The Sunflower Café used to hang out with Bill “Spaceman” Lee of the Boston Red Sox (he was not F. A.)

But the two athletes I got to know best from The Cantina were both former boxers; Tony DeMarco and Marvin Hagler. 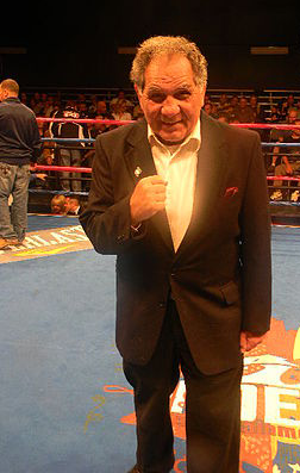 Tony DeMarco was a former World Welterweight Champion who had been born and raised in Boston’s North End.  The first time I spoke with him I asked him about a rumor I’d heard — that ‘Tony DeMarco’ wasn’t his real name.  He and his best friend had supposedly swapped names when they were teenagers.

I learned that Tony’s real name was Leonardo Liotto, but at only sixteen-years-old he was too young to fight as a professional — so he borrowed the birth certificate of his friend.  He won that first pro fight at age sixteen, knocking out his opponent in the first round.

After stringing together an impressive series of knock-outs, Tony had to stick with the new name.  It was under that name that his wins had been recorded.  He fought his way up the ranks, and eventually became Welterweight Champion of the World . . . all as Tony DeMarco.

Years later, when Boston Mayor Thomas Menino named a street in the North End after this hometown fighter, . . . of course the street was named “Tony DeMarco Way.” 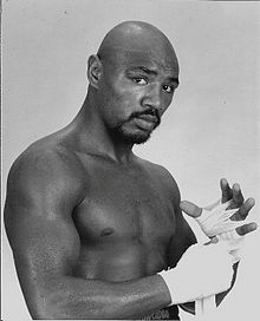 “Marvelous” Marvin Hagler stopped into The Cantina late one night with a small group right at last call.  I let them hang out while I was closing, and then we all went to The Bell in Hand, just off Quincy Market, a short walk from the North End.  (The Bell in Hand is America’s oldest still-operating tavern — established in 1795.)

After that night at The Bell in Hand, I ended up partying with Marvin several more times, and you couldn’t find anyone more down-to-earth, or unpretentious.  It was as though he’d fought all his battles — had won far more than his share — and now had nothing to prove.

He had fought Sugar Ray Leonard, Roburto Duran, and Tommy “Hitman” Hearns.  These four guys were the giants of their sport.  Marvin was a local guy (fighting out of Brockton, MA) who had been Middleweight Champion of the World for over six years, but when you got him to talk about his legendary fights, he was totally matter-of-fact about it.

His bout with Tommy Hearns (now known as “The War”) is still considered one of the greatest fights in boxing history, but Marvin might as well have been talking about someone’s high school or collegiate career . . . he was that low key about it.  (If you’d like to watch that fight — it only lasted eight minutes — click here.)

I once asked Marvin about that terrible split-decision against him in the Sugar Ray Leonard bout.

“You know the game going in,” he said, “The only thing you can do is get in there and leave it all in the ring.  You can’t control how the ref and judges are going to score the fight.”

It sounded like good advice for a fighter — or a writer — and a lot of other endeavors as well.

Marvin had come into The Cantina not long after that night with F. A.  I’m glad he did.  It was a welcome change after watching F. A. in the booth.