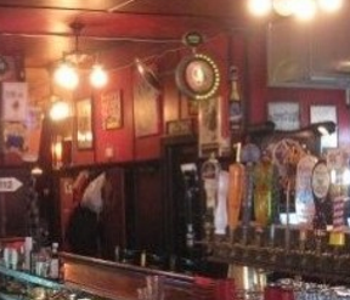 (This post comes from a bunch of notes scrawled on cocktail napkins at The Lark Tavern.

In those days I also volunteered an overnight shift each week at Refer Switchboard, a 24-hr crisis center half a block from The Lark.  One night I’d come to work directly from a counselor’s meeting, where our resident psychiatrist Ron Kurtz had pretty much taken me over the coals.

Behind the bar, I was thinking of all the rebuttals I wish I’d thought of a few minutes earlier.  I began scribbling on cocktail napkin after cocktail napkin.  Here’s some of what I wrote down, roughly organized now . . . )

I keep thinking about what Ron said:  “You don’t trust the world . . . . you view the world as hostile place.”

“You know he’s right, don’t you?” Stacey asks as we work behind the bar, “That is the way you look at things.”

“What are you talking about?” I respond.  “It’s not the way I SEE things.  The world IS a hostile place!”

Not all the time, and that’s not all the world is, but it certainly can be . . . don‘t you agree?

Listen to the news.  Drive an ambulance and spend all day patching up victims.  Take a walk alone and late at night in a bad section of town.  Do you feel safe?

Ever hear people say how much they love winter, the quiet enchantment of a fresh snowfall?  I think winter is a hostile environment.  Stand outside for a few days in the cold and snow, . . . you’ll die.

First you have to protect yourself – with warm clothing, hot toddies, and a crackling fireplace – then it can be beautiful.

That’s how I look at the world.  It’s not a damn bed of roses.  I guess it’s something a guy thinks about more.

A man and woman walk down a dark street and a threatening figure emerges from the shadows.  Does the woman step in front of her male companion to protect him?  That’s the guy’s job.  Who wants to feel like a little boy protected by his mother?

Every young man at some point faces this part of being male – there are times when you have to take a stand, or back down, and then live with it.

I grew up with a step dad, and we didn’t get along.  I really don’t remember him ever hitting or paddling me, but he must have . . . because I have a clear memory of the last time he was about to hit me, and didn’t.

I was in the first or second grade, and I’d done something wrong.  He stood in front of me.  “I’m going to have to punish you,” he said.

I didn’t like the way he said it.  He wasn’t my real father.  I resented that at any moment he could just decide to spank me.

“Which do you want to be spanked with?” he asked.

He was holding two pieces of wood left over from the construction of our new house — a three-foot piece of 2×4 in one hand, . . . and in the other, a thin strip of plywood, maybe a couple of feet in length, less than half an inch thick.

He stood in front of me with one in each hand.  “Which one do you want?” he asked.

I understand now that a strip of plywood stings more.  How hard was he going to hit me
with a 2×4?  And on the butt?  That wouldn’t hurt half as much as the sting of the plywood.  I realize now that he was using the deadly look of the 2×4 to trick me.

I didn’t know this as a child.  I just looked at the 2×4, and imagined broken bones.

“This one is really going to hurt,” he said menacingly, moving the thick slab of wood in one hand.  “I’d choose this one if I were you,” he said as he lifted the thin strip of plywood.

“I want that one,” I pointed again to the 2×4.  “Hit me with that one!”  Standing in front of him, I was barely able to keep myself from crying.  “You gave me the choice, and I want that one!”

He looked at me for a minute, and then it was over.  He turned away and told me never to do it again, . . . whatever I had done to make him angry.  But he never again hit me, or spanked me.

In grade school I wasn’t really bullied by anyone, probably because at my school in the rural area outside Syracuse, everyone was a neighbor.  I was a quiet kid, small, and I wore glasses.  I’m sure there were some mean kids, but I guess they didn’t think I was worth their time.

I was in one fight in grade school.  I was beat up by a girl.

In fourth grade, Mary Luchsinger and I were arguing about something when she hauled back and punched me in the nose.  She was a tough kid.  She had three older brothers and they all lived on a farm.

I stood there with my nose bleeding.  I came up with something like, “I won’t hit you back because you’re a girl.”

Everything changed in Junior High.  With the first classes, the other elementary school in our district added their kids to our school, and that introduced the boys from the more city-like suburb of Nedrow.  There was the expected jostling between them and us.

I was about to open my school locker one day, but three guys from Nedrow stood in my way.

“I need to get in my locker,” I gestured with a smile.

One of them leaned forward and glared at me.  “Why don’t you say, Pretty please?” he asked.

I looked at them.  This was ridiculous.  Surely we were more mature than this.  I waited, hoping they would step aside.

“Say, Pretty please,” the guy repeated, smiling.  The other two grinned with him, like they’d just come across a piece of freshly-frosted cake.

I looked at the three of them, and they looked at me.  I thought about it.

“Ok,” I said finally, “Pretty please.  Are you happy?”  They all turned away and walked down the hallway, laughing.

It only got worse.

One afternoon in a civics class, the teacher was telling us about people who posed as doctors, promoting fake cures.  One of the kids pointed and said loudly that I looked like a quack — and everyone burst into laughter.  Even the teacher laughed out loud before she caught herself.

I wanted to change schools.

I had two friends back then — Bill Molloy lived one house further down Makyes Road and Barkley Tate lived on Griffen road, behind our house, over the hill.  I felt safe when they were around, but if it was just me and those Nedrow guys, they’d laugh and call out:  “Quack . . . Quack.”  “Quack . . . Quack!”

One afternoon I was at my locker when one of boys who had made me say “Pretty please” came over.  He leaned against the lockers next to mine and watched as I fit in the key.  By now I knew his name was Roger Buckley.  As I opened the locker door, he grinned.

My heart sank.  I was alone.

I turned to him.  “Do you want something?” I asked.  “You have something to say, Roger Fuckley?”

He was startled.  His head snapped back on his neck.

Suddenly I was so angry.  The last time they made me say, “Pretty Please.”  How could I let them do that?

“Don’t say that!” he scowled down into my face.

“Shut up!” he said, fists clenched, “You’re looking for trouble!”

It was just the two of us and I didn’t care.  He must have sensed this and turned away,
walking down the hallway.  “Don’t ever call me that again,” he said over his shoulder.

After that, there was no more “Quack-quack” as I walked down the hall.  But I worried
this might be the lull before the storm.  I was worried about a big confrontation with these guys.

I was saved in a way by my best friend, Barkley Tate.  These guys picked on Barkley too, and he’d gotten into a fight with Steve Haumann.  Steve was one of Nedrow boys, later an All County lineman on our football team.  A big guy.

Barkley whooped him pretty good, knocked him down a couple of times until Steve finally said quits.

Barkley’s parents let him subscribe to Ring Magazine.  When he asked, he parents had given him a heavy punching bag for his birthday.  We hung it from a rafter in his basement and spent hours punching that bag.  We imagined ourselves in the ring fighting for a world championship.  Barkley had two huge pairs of boxing gloves, 16-ounce gloves almost like pillows, and we’d spare on his sloped backyard.

I guess I got better faster than he did, because the last time we sparred I knocked him down three times within a minute or so, and we quit for the day.

Now Barkley had beaten Steve Haumann, and when the guys from Nedrow asked him if he’d ever been beaten, he told them about our afternoons sparring.  They didn’t bother me anymore.

The only real physical confrontation I had in high school, other than sports, came during
my senior year.  One of the wannabe tough guys in school, a punk, took a swing at me.  I grabbed him, he grabbed me, and he got me in a headlock.  I reached under his knee, lifted him up in the air, put a half nelson around his neck and slammed him down on the hall floor.  He was still lying on his back, trying to regain his breath when one of the teachers pulled me off. 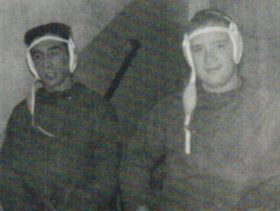 Me and high school wrestling teamate Doug Emery (r) after a grueling session on the mats.

Later, a couple of guys the kid hung around with watched warily as I walked by.  “He
picked him up like he was a fly,” one of them said.  It was a wrestling move — if you know what you’re doing and they don’t, there’s really nothing to it.

Anyway, those were the two physical confrontations I had while in school.  I was beat up by a girl, and caused a stir by lifting someone in the air.

In the spring of my senior year I ran into the boy who had made me say “Pretty Please.”   I was walking down the hall and saw some guy coming the other way, looking at me strangely.  I didn’t recognize him at first but as he got closer, I realized it was him, . . . the kid from the locker in Junior High.  The one who did the talking.

I didn’t care about that now, but he had a tentative look and when he saw the recognition pop into my face, he shied away, moved further to the other side.  His eyes darted nervously as we approached.

What did he think, that I was on the wrestling team now and was going to punch him?  We passed on opposite sides of the hallway, and I felt bad for him.  He was a thin kid, not tough looking at all.

As we approached I thought about saying something like, “Hey, no hard feelings . . . we were just kids.  How’s it going?”

But by the time I’d thought of it, we’d already passed by.

7 Responses to STANDING UP