(This post is about two things that happened at Johnny D’s over Easter weekend.)

If you read last week’s post, you know about my decade-long search for an elusive bartender’s comment.

I’m pleased to say the search is over.  If you want, you can “cut to the chase” by scrolling down . . . but I thought some of you might be interested in the background.

It began one night behind the bar when the Academy Awards were on TV.  As I worked, they were showing a montage of classic movies clips, one after the other.  They flitted by quickly, but one clip in particular stopped me in my tracks.

The bartender’s answer was like a fine brandy.  It had subtle layers of flavor and nuance.  At first it was simply non-sequitur funny . . . with a hint of stereo-typed pseudo-insight into the bar life . . . followed by the realization that some writer had a blast putting that line into a movie.

I jotted it down on a cocktail napkin, but had no idea where the scene was from . . . they didn’t identify any of the movies in their montage.

I was determined to find it.

Initially, thinking the actor was Jimmy Stewart, I began watching all of his old films.  I even began asking my friends to help. 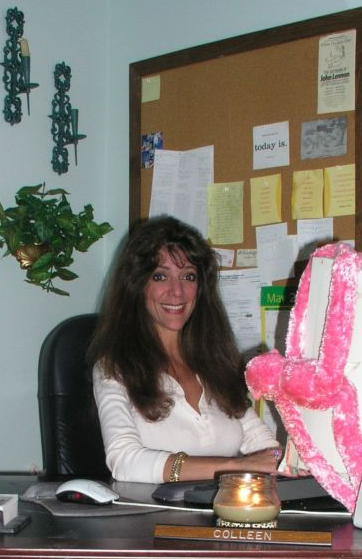 Colleen in her home office

“You want me to watch It’s a Wonderful Life?” Colleen asked over the phone one Christmas season, “Why?  I’ve already seen it a hundred times!”

“You’re looking for what?” Colleen asked, “A famous bar line?”  I stopped asking friends.  I was feeling a little foolish.

I don’t want to tell you how many Jimmy Stewart movies I watched by myself, from beginning to end.

Years went by, and I still hadn’t found the scene — that’s because I was looking in the wrong places.

It turns out that the actor wasn’t Jimmy Stewart after all.  (All those movies I’d watched . . . ).  I’d only caught a passing glimpse that night while working, and I’d been searching for the wrong guy.

I learned this from an on-line search begun in 2010.  I met fellow-blogger Scribbler50 (Behind the Stick) during that search — he was interested the line as well.  Like me, he was unsure about the details, but he thought it was from an old Western movie.

Through an exchange of emails and a coordinated search, we determined that the movie was “My Darling Clementine,” staring Henry Fonda.  J. Farrell MacDonald played the barman, Mac.

I immediately ordered a DVD copy from Barnes & Noble.

When the DVD arrived, I could at least watch the scene in the comfort of my apartment . . . but I still didn’t have a clip to share on-line.

A few more years went by.

Then last week (when I should have been writing a new post) I began a new search, now looking on YouTube.

After many hours, I only managed to come up with one, very-ragged clip that was dubbed in Spanish.

I went back to my English-speaking DVD.

David Hayden (of the Hospitality Formula blogs), had given me the idea of creating my own clip.  I asked our soundman, Josh, and he offered suggestions on how to “rip” a track from a DVD,  and turn it into a short vid . . . but it sounded complicated and required expensive software.

I took the DVD to work with me.

I borrowed bartender Jeremy Newcomer’s brand-spanking-new iPhone.  We went down to the booking office, which has a really sharp digital monitor. 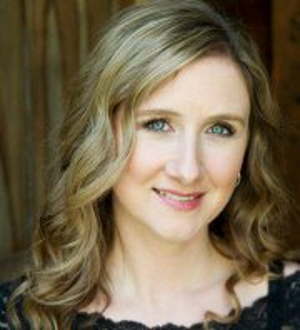 On the way to the booking office, we had to walk through the band room.  Amy Black was playing at the club that night, and she was resting in the band room when we stormed through.

“What are you two up to?” she laughed.  I guess we looked pretty intent.  I explained the whole story, and she watched the scene with us once we’d loaded the DVD into the flat screen’s drive.

We got the movie to the right spot,  . . . then I braced myself in a wide stance, and tried to hold the iPhone/camera steady as Jeremy hit the play button.

It came out just fine.

“My, my,” Amy smiled as we watched the newly-finished product on Jeremy’s phone, “Guys who know how to get things done . . . I like that.”

I let her think the better of us.  It’s just part of the business, really . . . there’s always someone around who knows something about what you want to do. 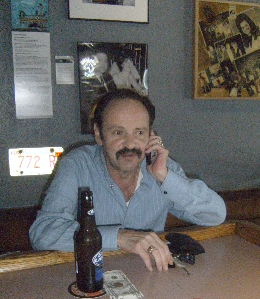 While all this was going on, it was Easter . . . and at Johnny D’s that means Portuguese bread.  Kenny Branco (click here for a great story about him) has been a regular at the club forever, and every year for the past twenty years, he’s given a huge round loaf of fresh sourdough bread to each bartender.

“Thanks, Kenny,” I said on Sunday when he handed me mine.

I hesitated for a moment . . . I had heard a story years ago.  Should I ask him about it now?

“I want to ask you something, Kenny,” I said, “Shawn Day told me a story once.”  Shawn had been one of our best bartenders, and at that time he was a party animal.

He told a story once about walking home late at night, half-in-the-bag.  He was walking past a large empty parking lot.  There were no cars in the lot . . . it was completely deserted, and dark.  It was right around Easter time.

As he was walking by, Shawn said that he saw the headlights of a car ease slowly into the empty lot.  It was three o’clock in the morning.

The car was moving so slowly, it looked suspicious.  Shawn continued to watch as he walked by.  The car was just creeping along.

Then a square, white truck pulled into the other side of the parking lot.  Now the two vehicles seemed to spot each other, and they both hit the accelerators and raced to meet in the middle.

They half-circled around each other, screeching to a sudden halt.  A short man leapt out of the car, a dark Lincoln Continental, and a scruffy-looking guy jumped out of the truck.

The man with the car threw his trunk open, while the driver of the truck ripped apart its back doors.

The two of them began hauling out loaves of bread, throwing them into the guy’s Lincoln Continental.  It looked like a drug deal in the dark of night . . . except instead of kilos of coke, what they seemed to be loading into the guy’s car trunk was bread.

When the trunk was full, they both jumped back into their vehicles and screeched off like bats out of Hell, the smell of burning rubber and puffs of smoke trailing behind them.

“It was Kenny,” Shawn told us, “In the middle of the night, in a darkened lot, it was Kenny . . . in his Lincoln Continental, scoring Portuguese bread.”

Kenny looked at me.

“Yes,” I said.  It was always really fresh . . . as though it’d just come out of the baker’s oven (which apparently it had.)

Kenny lifted his hands and shrugged his shoulders.  “Then why all the questions?” he asked.

I want to thank Johnny D’s bartenders Jeremy Newcomer and Oscar Simosa, as well as David Hayden (Hospitality Formula), Caveman (Tales From A Bar), and Scribbler50 (Behind the Stick) for their help with locating and reproducing the old movie clip.