A CHILD’S TRICYCLE (and drinking to forget) 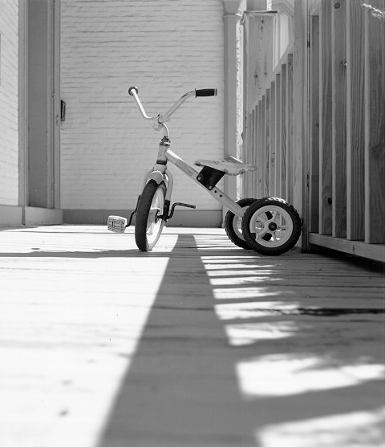 (This isn't the porch, or even the same tricycle, but I love the photograph by Isadora Murphy.)

I was behind the bar at The Sunflower Café in Harvard Square when I got the call from Bruce S.

Bruce was a drinking buddy from my Albany, NY days.  He and his girlfriend Betty had been regulars at The Lark Tavern.  They didn’t believe in the formalities of marriage, so Bruce and Betty had been living together for three years after dating all through high school.  They were the settled ones, and in some ways they had given our gang at The Lark a sense of stability.

At least we had friends who acted like adults.

Bruce was calling now to tell me that he and Betty had broken up.

“She ran off with Greg,” he told me over the phone, “I thought that guy was my best friend.”

Bruce wanted to make a road trip to Boston to blow off some steam.  “I can be there tomorrow,” he said.

It turned into three days of non-stop drinking.

After Bruce parked his car in front of my building, we walked around the corner to the bank where I withdrew $100 in twenty-dollar bills.   Then we took the subway downtown to Boston’s Combat Zone, where the strip clubs were.

Bruce bought the first round at a place called The Naked I.

I bought the next round with one of the twenties, and I remember that the bartender studied the bill carefully.  She glanced at a note taped to the side of the cash register.

Fifteen minutes later, two guys were behind us and suddenly I was shoved face forward down onto the bar.

“Don’t fucking move!” one of the guys said.

They both had guns.  Bruce was now held face down on the bar, too.

They were undercover cops.  Apparently the twenties were counterfeit.  They asked us to stand with our hands on the bar, then frisked us.

After a few minutes, I convinced them that I really didn’t know what was going on.  “I got the money from my bank,” I kept telling them.

“You know, I could keep the rest of the this,” the detective said as he handed me back the remaining twenties.  “Just don’t spend any more in here.”

Bruce paid for the rest of the day.  With our drinks and the tips for the dancers, he spent a lot of money, but we laughed all afternoon that the bartender at a strip joint had spotted the phony bills, and the bank didn’t.

(I still think the bank knew all along, and having been stuck with the phony bills just wanted to get rid of them.)

The next morning we woke up early and headed for The Abbey Lounge, which was around the corner from my apartment.  It opened at 8:00 A.M.

For the rest of Bruce’s visit, we drank from eight o’clock in the morning until the bars closed, then we’d go home and have a few more beers before calling it a night.  Back to The Abbey the next morning when they reopened.

Of course I knew why Bruce had come to Boston . . . if only for a few days, he wanted to stop thinking.

He wanted to forget.

He wanted to drink.

What kind of friend was I, if I let him drink alone?

Wednesday was Bruce’s last night in Boston, so we went to The Sunflower Café.  It was in Harvard Square on JFK Boulevard, where the Pizzeria Uno is now.

Tommy Talbor was working behind the taps.  He’d been a bartender with me at The Lark Tavern, and I’d gotten him a job here when he moved.

While tending bar, Tommy called another Albany transplant – a nurse who had also frequented The Lark before moving to Boston.

She showed up at The Sunflower Café half an hour later with some nurses who worked with her at Massachusetts General Hospital.

As the night wore on, I was thinking this was about all the partying I could handle.  It had been three straight days, non-stop.

But at closing time that nurse said we should all go back to her place.

I told them I’d had enough . . . I was going home.  There had been moments during the night with these upstate New York friends that I thought I might collapse.

We wound up at her apartment in North Cambridge; Bruce, Tommy, the nurse and I, and some of her friends.  By now it was probably four o’clock in the morning and I kept telling everyone that I really had to go, but no one would give me a ride.  At this point I had no money left for a cab.

It would be an hour on foot back to my apartment, but I finally decided to split, a long walk ahead of me.

I had three beers with me for the jaunt home, one in each coat pocket and one in hand.

When I got downstairs, there was a child’s tricycle on the front porch.  I stood on the porch for a minute sipping my beer, looking at the tricycle.

I decided to ride it back to my place.

It was a cold night, and I was wearing the second-hand leather jacket I’d bought for fifteen bucks when I first got to town, at a place called Una’s Experienced Clothes.

I rode the tricycle down the right hand lane of Massachusetts Ave, serving toward the curb when a car buzzed by.

Some of them honked their horns.  I could hear them thinking, “Another drunken bartender riding his tricycle home at 4:00 A.M.!!”

The three-wheeled bike was so small that my knees hit the handle bars if I didn’t keep my legs spread wide. I knew this was crazy, but at the time it seemed better than walking.

I turned off Massachusetts Ave and went over the short bridge onto Beacon Street. This strip of road between Porter and Inman Squares has been under repair for years. There are large potholes, dips and rolls in the broken surface.

I must have hit a pothole.

I started to lose control of the tricycle.

I struggled with the handle bars as I continued to peddle, trying to stay upright.  I was going to crash!

I hit the road, landing on my side.  The bike’s wheels were still spinning.

The bottle in my coat pocket had broken, and now the jacket and one side of my pants were soaked with beer.  I wrestled with the tricycle, trying to turn it back upright on all three wheels.

Then I continued the ride home.

At my apartment building, I carried the bike upstairs and went to bed.

Early the next morning someone laid on my apartment buzzer and wouldn’t let up.  It was the nurse.

“The kid downstairs at my building was crying this morning,” she told me over the intercom.  “You don’t know anything about a tricycle, do you?”

She followed me up to my apartment, and I gave her the bike.

All I wanted to do was to go back to bed, and she lay down beside me for a while.  I remember that she had the sweetest kisses.  But I just rolled over and fell asleep, and she took the kid’s tricycle back to North Cambridge.

8 Responses to A CHILD’S TRICYCLE (and drinking to forget)