A DAY LATE AND A DOLLAR SHORT

My apologies, but there won’t be a regular post this week.  I’m behind once again.  Starting next week I’ll be dropping one shift on the bar, no more Thursday nights — so hopefully I’ll be able to still make a living, keep this blog updated, and work on my New Year’s resolution. 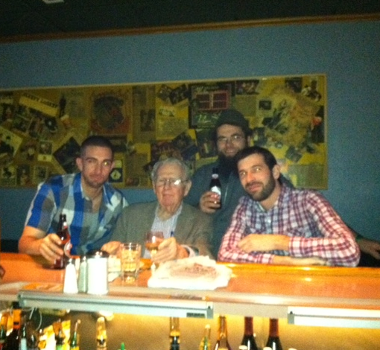 Next scheduled update is January 20th, but in the meantime here’s a recent photo from Johnny D’s — it’s our good friend Al, with some of the staff and regulars.

This crew was out bar-hopping in Davis Square — Brendan and Brooke, Dave, Jeremey, “Chombo”, Val and others — when they stopped into Johnny D’s.  They ended up hanging out with Al, sitting in his usual spot, and Val said, “Let me get a picture of the guys.“

Al is eighty-five-years-old, but as my coach Archie Goodbee would say, he’s still spitting fire.  He may not be as quick on his feet as he used to be, but he’s still mentally sharp, always walking into the club with the current edition of The New York Times under his arm.

We try to have his Jim Beam Manhatten (straight-up, dirty rocks on the side) waiting for him by the time he reaches his bar stool.

Al is content to sip his drink and read the Times cover to cover.  Sometimes he’ll be on his cell phone as we walk by, talking with one of his four kids, or eleven (I think he once told me it was eleven) grandchildren.  Sometimes he’ll bring his new iPad with him, and surf the web.

It’s hard to explain, but anyone who works behind the taps will understand — Al is just one of those guys you enjoy having at your bar.

Al minds his own business as  he orders an appetizer and switches to white wine, but it’s surprising how often he ends up in conversations with customers sitting on either side.  Al is inclined to talk about the bands that are playing, or current affairs, but I like to steer him to talking about the old days — when Scollay Square was hopping, and all the dance joints that they’d frequent.  Or back to the days when they’d all go to the North End and The Cantina Italiana, decades before I would work there.

Tom Brokaw called Al’s generation “The Greatest Generation.”  Al lived through the Great Depression as a young boy.  He built submarines during WWII, raised a family during The Korean and Vietnam Wars, and like most Americans was shocked and angry when John F. Kennedy was assassinated.

Al is a “been there/done that” type of guy who doesn’t need to tell you about it.

He’s done his job — and done it well — for his country, his family, and himself.  Now he just wants a comfortable place to stop at and relax for a while.

Always good to have you here, Al

Be back on the twentieth with a new post.

5 Responses to A DAY LATE AND A DOLLAR SHORT