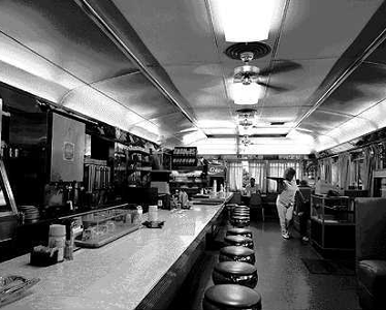 (This isn’t the Blue Moon Diner, but in Upstate NY they all looked the same — photo by Brian Beachum.)

Before becoming a bartender, I took time off from my college years to travel as the road manager of a local rock band.  The band was called “Wool” — Neil Diamond was our producer.  Here’s a story from those days . . .

This was supposed to be an easy gig.

We were playing that night in Watertown, NY — where the band’s leader, Ed Wool, and his lead singer Claudia both lived.

The job was so close it was almost like taking the night off . . . we knew we’d be home early, right after the show.

As it turned out, I was lucky to make it back in one piece.

Once the sound check was over, I didn’t have much to do while the band performed.  I wandered around the nightclub, still checking the sound but mostly just drinking and having a good time along with the crowd.

There were two really hot girls at the club that caught my eye.  Some of the band’s popularity extended down to me, and to be frank, in those days I took advantage of it.

I was having a great time, talking and dancing with one of the girls . . . but when she went to the ladies room, one of the guys from the crowd came up to me.

It was weird.  The guy seemed nervous to even be telling me this.  It was as though he was worried about just talking to someone on the wrong side of Sam.

Watertown is a small town, and this sounded like something you’d hear in a small town.  How could I respond to such a warning out of the blue?  I laughed out loud, of course.  You know young men . . . they never want to show fear.

Now that was true . . . I was studying karate, and I was training under a hard-core sensei. 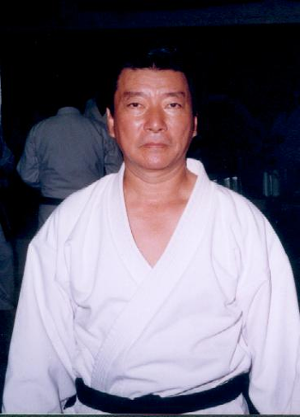 (Masataka is now a 9th Dan, and Vice-Director of the International Goju-Ryu Association.)

Masataka Muramatsu taught old-school Goju-Ryu.  We were breaking boards and smashing bricks in his class.  At the end of my Kata, Tensho, Masataka would break a wooden pine board over my forehead, just to demonstrate how tough we were.

In the middle of winter, as we finished each class dripping in sweat, we would run barefoot through the snow outside, wearing only our open karate uniforms.

Those uniforms were often splattered with blood.  We were tough.

“I’m really not worried,” I told the guy, even though I’d actually only been studying with Masataka for about a year.

The fact is, as everyone in martial arts knows — until all the moves become absolutely engrained — you’re not going to fight as well at the beginning as when you knew nothing!

At the beginning, instead of reacting instinctively, you’ll probably fight stiffly . . . thinking about what you’re doing, rather than just fighting.  It’s a basic rule — don’t go looking for trouble just because you think you know karate, especially when starting out.  Don’t test this stuff in the real world until you’ve actually mastered it.

But I didn’t let any of this good advice stop me.

But as the night went on, I saw other people looking at me a little funny.  It seemed like a lot of people in the crowd were thinking the same thing as the one who warned me.  They were probably asking themselves:  “Who is this fool hustling Sam MacDonough’s girl?”

“Exactly who is Sam MacDonough?” I asked the bartender after a while.

The bartender shook his head before answering.

“I don’t know what you’ve got in mind,” the bartender said, “But I’d wouldn’t be hitting on that girl, if I were you.”

According to the bartender, Sam MacDonough was a local tough guy who had killed two men in a bar fight.

Apparently the two men tried to ambush Sam one night as he walked out of another club.  One of the men hit Sam over the head from behind with a crowbar . . . but that was just the beginning of the fight.

Sam shook his head a bit — took the crowbar away from them, and then he killed them both.  He later escaped any charges because it was self-defense.

I walked away from the bar with my head spinning a little.  The barman’s words put a whole new light on things.

Now I was dancing while looking over both shoulders . . . but I was too proud to back down.

Beside, Sam wasn’t even there.

I drove this girl home in the band van, and she invited me upstairs.  She was one hot, foxy babe, and her hands were all over me as we tongue-kissed at her front door.

I looked over my shoulder once more, and went upstairs with her.

I will tell you, if you’re going to die, this was almost worth it.

This girl loved to ball.  And it seemed there wasn’t anything she wasn’t ready, willing, and able to do.  When I say she got down . . . I mean all the way.

Anyway, it was time for me to head home, and with the fun part over I began thinking about her boyfriend again.  I was thinking that she and I caused such a buzz at the club, word must have gotten back to him.

I was thinking that maybe he knew I’d gone home with her.  Maybe he’d followed me.  Maybe he was waiting somewhere for a chance to beat the living shit of me.

Maybe he wanted to kill me.

I pictured myself being run off the road on the deserted stretch of Route 81 that I had to take home.  (In that image, I saw Sam driving an old pick-up truck.)

I decided to stop at the Blue Moon Diner on the outskirts of Watertown just to calm my nerves, and think things over.  It was probably something like five o-clock in the morning.

I stuck my head in the door first, and looked around.  The diner was mostly empty.  Someone had given me a rough description of Sam MacDonough . . . and it didn’t look like he was here.

But I was sitting at the counter eating scrabbled eggs and ham when two new guys walked into the place.

One of them fit Sam’s description perfectly — he was a thick-necked, barrel-chested guy with a military-style haircut, a crew cut on top and shaved close on the sides.  He was wearing a T-shirt.

The two of them gave me a vicious look as they slide into a booth at the end of the diner.

They kept glaring at me as I finished my breakfast.  They were leaned over opposite sides of the table, and they were talking in low voices as they watched me.  “That’s Sam MacDonough,” the counter man said, as though to warn a perfect stranger about nearby danger.

I figured I’d be better off if they came after me in the diner.  At least there’d be witnesses, and maybe someone would step up to help me.

The men’s room was right opposite the booth where they were sitting, so I walked down towards it, trying to show no fear.  I figured they’d have to get out of the booth just to stand up, and that would give me an extra split-second to react.

But they just sat there glaring, watching me ominously and whispering to each other as I stepped inside.

Now I figured they might jump me when I came out.  I had a plan to kick the men’s room door open when leaving, but to hold back on stepping out, hoping to get them to jump too early . . . maybe throw them off a little.  My mind was racing.

Still inside the men’s room, I tried to get myself ready to fight.  I threw punches and kicks in the air.  I grabbed hold of the sink and pulled on it as hard as I could, trying to get my muscles ready to respond. 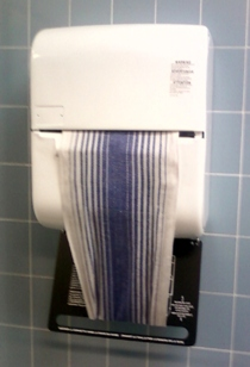 (This is what that towel dispenser may have looked like … before someone gave it a serious beating.)

There was one of those old linen towel dispensers in the men’s room . . . the kind that has a big roll of linen inside, and you turn the crank to roll out the fresh part.

It looked as though someone had worked over the towel dispenser with a baseball bat.

The metal on the front and both sides was badly dented, almost caved in . . . and the entire dispenser had been knocked so hard that the long bolts attaching its back to the wall were now fully exposed as it hung there at an angle.  The whole dispenser looked shaky.

“Not my problem,” I thought, and I reached up to grab the dispenser with both hands.  I was going to pull on it hard, just like I had on the sink.

But pulling on it just finished off what someone else had started.  The whole dispenser gave way . . . it went crashing to the floor . . . and those long securing bolts pulled out a good chunk of the plaster wall with it.

The whole thing hit the floor with this huge crashing noise.

“I’ve got other problems,” I told myself, and I turned to the men’s room door, leaving the dispenser and part of the wall on the floor.  Sam MacDonough and his buddy were waiting for me.

I kicked the door open as planned, holding back before sticking my head out.

They were both still sitting in the booth.

I walked back to my seat trying not to visibly shake.  I saw the one guy go into the men’s room, and when he came out he and Sam immediately began talking again in low voices, still watching me.

I paid the bill and walked out of the diner expecting to be jumped at any moment.

All the way home on Route 81, I was driving with one eye on the rear-view mirror.  There had been a pick-up truck in the diner’s parking lot, and I knew it had to be Sam’s.

The two of them had a different look on their face when I came out of the men’s room.  The one guy had immediately gone into the bathroom and when he came out they both looked a little concerned about something.

I finally had to laugh out loud . . . finally relieved . . . suddenly understanding what must have happened.

Someone probably told them that I knew Karate — and they had no idea that the towel dispenser had been previously worked over with a club, or something.

When that guy went in, what he saw was a smashed metal dispenser with the living fuck beaten out of it, and a gaping hole in the wall where the bolts had pulled everything down along with it.

They must have thought that I’d done it . . . maybe with with a spinning karate kick.

(I had glared at them when I walked out of the men’s room, but it was only a return glare out of instinct . . . at the time I was scared shitless.)

But the destruction on the men’s room floor and the round hole in the wall must have made them think twice about jumping me . . .

By the time I thought of this I was almost home, but I was still laughing as I got out of the van.