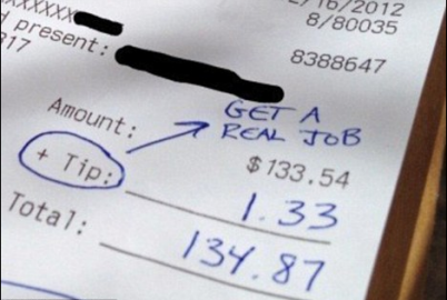 This tip was supposedly left by a rich banker showing his disdain for restaurant workers. (Image from thejobmouse.com)

Nobody likes cheap people . . . but in the restaurant business we really don’t like them.

Understandably, not everyone can afford to be generous.  At Johnny D’s the focus is on live music, and when it comes to World Beat crowds, or Reggae crowds — these people often have alternative life-styles, and probably not much money.

So I can’t complain about the loose change they leave (or don’t leave.)

But it’s the obviously well-off folks . . . those who have the money but are simply too cheap to part with a dime . . . those are the people that really bug me.

Back at The Lark Tavern, Tommy Talbor had his own way of dealing with these folks.  If someone left him a short tip — especially if they offered an insincere apology, or excuse — Tommy was quick to respond.  He’d tell them:  “That’s OK . . . people generally tip what they can afford!”

Tommy’s whole attitude behind the bar was biting and sarcastic, but over the years I have used his line once or twice myself.

There was one guy at Johnny D’s one night who left me a quarter as a tip on a $19.75 round.  I probably wouldn’t remember him, but he made such a big deal of setting the quarter down on the bar.  He had this smug look on his face — an irritating little smirk, as if to say — “I know you expected more, but that’s all I’m leaving!”

He stood there smiling as if his smug grin was intended to add insult to injury — like the $1.33 tip illustrated above, with its “get-a-real-job” jab.

I picked up the quarter, and smiled back at him.

That threw him off for a second, but he continued to look at me and shrugged his shoulders as if to repeat, “Hey, that’s all I’m leaving, pal!”

“Don’t worry about it” I said to him, still smiling, “I never expect people to tip more than they can afford.”

Now he looked as though he was choking on something.  He wanted to say something more, he wanted to have the last word, but he wasn’t sure what that was.

“Just try to keep smiling, guy,” I thought as I gave him a quick thumbs-up with one hand, “I just called you an asshole.”

Then I tossed the quarter into the tip jar, and continued making drinks.

There’s a reason all this comes to mind . . . last Saturday night we had one couple who clearly belonged to this cheapskate 00.1% of customers. 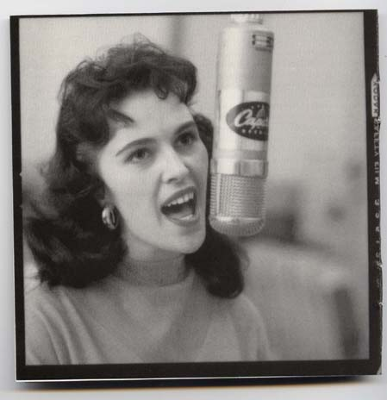 Wanda Jackson was playing at the club that night . . . she’s in the Rock and Roll Hall of Fame, and she’s called “America’s first female Rock and Roll singer.”

It was a great crowd that came to see her . . . or at least 99.9% of them were.  Early in the evening we had one cheap couple who tried to sneak into the show for free.

But that story is for part two of “Cheap People,” and it’s coming in the post next Saturday . . .

16 Responses to CHEAP PEOPLE (Part one)