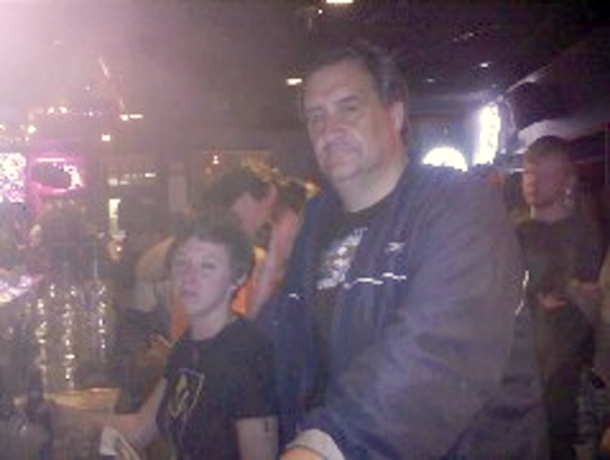 Dave at Johnny D's (with Jenny)

Dave is huge. He must be 6′ 7″, and more than three hundred and fifty pounds. I can’t imagine that he wasn’t a football player in college. He’s so big that he holds his drink glass between a thumb and a forefinger, the way someone might hold a small shot glass. (Don’t believe me? Compare Dave’s size to the longneck bottle in Jenny’s hand.)

Fortunately, he’s also a good guy. Always friendly, polite. I don’t know what he does for a living, but he has an air of professionalism. He‘s totally relaxed and confident.

One night at the club he left his drink and his jacket at the bar, and got up to dance. Dave loves to dance. He’ll dance all night, and he’s amazingly light on his feet.

While Dave was dancing, a young couple came up to the bar and there was only one seat open next to Dave’s jacket. The girl sat down and the kid with her took Dave’s seat, ignoring the drink and the coat. I figured it was OK. When Dave came back the guy could get up.

This new guy and his girlfriend were in a foul mood. They were fighting about something and he was treating her like dirt. “Who would ever marry you?“ I overheard him snort at one point, “You’re trash . . . you’re a loser.“

He was a real jerk. Loud, stupid, obnoxious. But he hadn’t quite crossed that line where I felt it was my place to step in. The girl didn’t look around. She didn’t try to catch my eye. This was still a private conversation. She sat there listening. She looked so beaten down.
I was sorry now that I’d given him that first beer, and warned the other bartenders that we shouldn’t serve him a second one.
When Dave came back he let the guy know that this was his seat. Dave was polite; he was smiling. But the guy was an asshole, and dismissed Dave with a wave of his hand.
They began a conversation and next thing I knew the guy stood up and they were arguing. Dave is usually the type to let things slide, but the kid’s attitude was starting to get to him.
“Take your fucking jacket . . . and get out of my face!” the kid yelled at Dave.
Dave’s head snapped back a little on that massive neck. This guy was probably 5′ 8″, maybe 150 lbs. It was an incredible mismatch, the two of them standing face to face. The guy kept cursing up at Dave.
Dave’s face was beet red.
I went over to the two of them. “Calm down” I told the kid. “You’re in his seat.”
The guy wouldn’t listen.
“This man is a friend of ours,” I told the kid.
“Fuck you! Fuck all of you!” the kid kept cursing. He wouldn’t stop.
“Time for you to leave,” I told the kid. By now two doormen were standing behind him. “Just walk away,” I said, “ . . . Head for the door.”
The kid didn’t budge. He looked at the doormen, at me, then at Dave. His fists were clenched. We rarely see any real trouble at the club, but I thought, “Is this kid crazy enough to throw a punch at someone? Did he feel like a big man because he was able to push his girlfriend around?
It was ridiculous, the two of them standing there. It would have taken three or four of this guy to fill Dave’s bulk. Then Dave spoke quietly and calmly, although it looked as though he was about to explode.
“Listen pal,” Dave told the kid, “I’ve taken shits bigger than you.”
Either Dave’s size, something about his voice or what he said finally brought the kid back to reality. He looked around once more, then walked toward the door on his own, luckily for him.
It was one of those situations that could have gone either way. I think if Dave had squeezed the kid’s head between a thumb and a forefinger, his face would have popped open like a grape.
This entry was posted in Life on a Cocktail Napkin. Bookmark the permalink.