(Sorry this is late, but today we’ll be talking about The Doors, customers that don’t listen, and Sandy Island — a missing piece of real estate in the south Coral Seas.  Believe it or not, even the Sandy Island part is a bar-related story.) 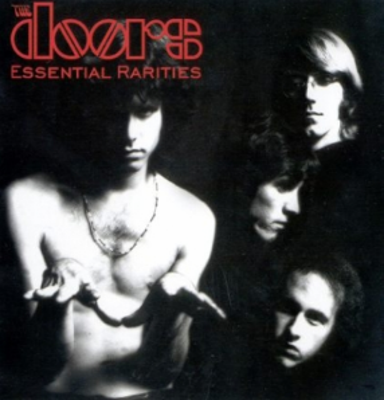 The problems of an ever-changing crowd . . .

“I’ll have a Bud light,” the guy in the tan shirt says.

“I’m sorry, we only have Narragansett Light or Sankaty Light.”

I know it’s hard to hear when the band is playing, and sometimes customers aren’t really listening to what we say anyway.

“No,” I tell the guy patiently, “We only serve local beers . . . we only have Narragansett Light or Sankaty Light.

“Narragansett is the closet to Bud or Coors,” I explain, “Sankaty is a great beer from Cisco Brewers, in the Cape Cod area.  It has a lot of flavor . . . you won’t know you’re drinking a light beer.”

There’s a well-known national act playing on stage, and I don’t recognize most of the people in this crowd.  They’re mainly first-timers at the club, and they don’t know anything about the place.

Local and regional bands have their regular following, but the first-time-for-us national acts usually bring in a sea of new faces.

That’s something to take into consideration when you’re preparing for the crunch.  What will this crowd be like?  What will they order?

“This will be a beer-drinking crowd, better bring up extra pints.”

“Cosmo crowd tonight, lots of Sour Apple Martinis and Lemon Drops . . . be ready for drinks that take a long time to prepare.”

And whenever there’s a national act with a lot of first-time customers, we know we’re going to be tied up answering a lot more questions.  Sometimes as they decide what they want, the exchange can go on forever.

Bless the regulars who come up and know exactly what they want.  “Hey, Dave,” I’ll say, “Great to see you!”  And that night I mean it more than ever.

Friday night, Robbie Krieger, former guitar player with The Doors, will be playing at Johnny D’s.  Performing with him will be Arthur Barrow, Tommy Mars & Chad Wackerman of Frank Zappa’s band and Larry Klimas of War.

It’s going to be a madhouse.  Wish us luck (we better print up more drink special/beer menus.)

The exotic island that never was . . . 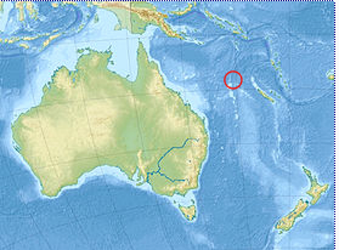 You may have seen a story on the internet this week about an island in the Coral Seas that has been on the international maps since 1876 . . . but now that island simply can’t be found.

This island was supposedly 16 miles long, and it was on all the maps, but when an Australian research team sailed to find it . . . it just wasn’t there.

Had it disappeared like Atlantis, suddenly sinking beneath a climate-raised ocean?  Had it been nuked into oblivion during some secret, cold war atomic bomb test?

There was a lot of discussion about what might have happened, and then someone came up with the idea that the island might never have existed in the first place.  They theorized that some long-forgotten sea captain may have simply made a mistake when he recorded seeing the land mass, and that the error was passed on map to map, generation by generation.

(Imagine someone during the last 150 years using the official maps . . . trying to sail to, or around, this mysterious “Sandy Island” supposedly located south of the Solomon Islands and west of New Caledonia.)

Anyway, all this talk about missing islands made me think of a regular at a bar I worked at years ago.  Looking back, that regular just might have had the best answer to this.

He was a fascinating guy, a computer geek with an eclectic work history.  I remember one day he was telling me that he had once worked for a company that made maps.  The story he told now comes to mind.

He said that in those days map-making companies would routinely insert “false flags” into their maps.  (This was all pre-Google, before satellite map-making.)

Back then when a company invested time and money into manually charting a map, they wanted to be sure that someone didn’t just copy their map and published it as their own.

So they would insert false streets into obscure places — show a street that didn’t exist.

They’d add fictional detail, drawing in a road or a landmark that wasn’t really there.

“Don’t you think that might be a problem,” I remember asking the regular, “If  someone was lost?  What if that someone was driving around with his wife, and they were using the map to find their way?” 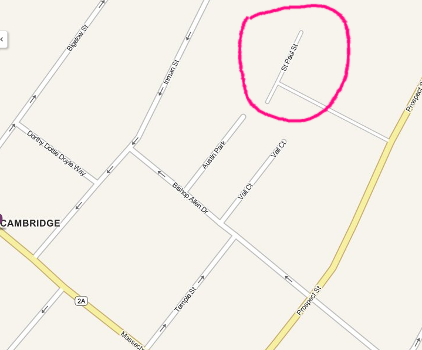 Is this street really there??? (Google map)

I could just picture some poor guy, his wife in the passenger seat next to him with a map on her lap, as she complained that they’d just missed their turn-off.

But as we talked, the regular insisted this sort of thing was done all the time by map makers.  “Everyone did it,” he said as he ordered another beer, “It was just part of the business.”

Amazing, the things you can learn in a bar.

Anyway, for my money I think I know how an island that doesn’t exist appeared on all the maps of the south Coral Seas.