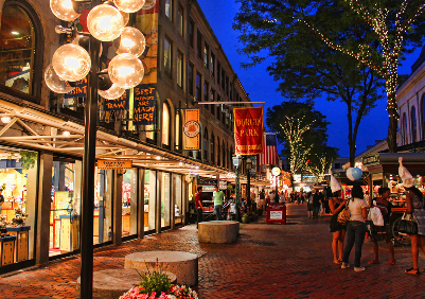 This post may be a little disjointed, but right now I’m thinking about one of the best jobs I’ve ever had — at Friends & Company, in Boston’s Faneuil Hall.

Today I want to tell you about the owner, Pam Carson, who took it in her mind to open a restaurant  . . .  even though she had no restaurant experience.  (Sounds like a recipe for disaster, doesn’t it?)

There’s a hundred good stories from that time, as Pam struggled with her new business; this is just one of them  . . . an hysterical incident arising from a good, if uninformed heart.

But first, here’s the back story — how Pam got started — something that still amazes me.

Pam Carson already ran a very successful antiques outlet called The Boston Flea Market.  Once a year she rented the entire Hynes Convention Center for a three-day crafts exposition.  Pam’s annual “Christmas Crafts and Antiques Show” featured thousands of vendors, and drew over one hundred thousand visitors yearly, each purchasing a ticket as they walked through the turnstiles.

(What did it cost just to rent out the Hynes for three consecutive days and nights?  Pam Carson was no stranger to big-risk ventures.)

Somehow in her business dealings, Pam learned about a revitalization plan for Boston’s Faneuil Hall district — and that’s where she decided she should open a restaurant. 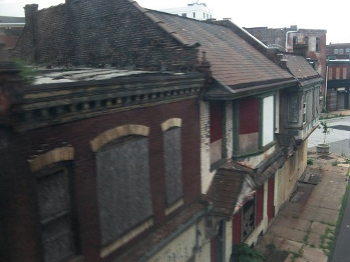 Back then Faneuil Hall was a run-down collection of dilapidated buildings on Boston’s waterfront, and few people could have imagined that in a short time the rows of boarded-up warehouses would become one of America’s top tourist destinations.

One of those who couldn’t imagine it was the owner of the small, empty building Pam wanted to rent.

Pam rented two floors and the basement of a vacant property for something like ten times less than that space would be worth a few years later.  She got an iron-clad, ten-year eighty-page lease, with an option to extend.  She was looking ahead — big-time.

Pam hired architects, a construction company and restaurant equipment companies to help transform her new empty space . . . and then she hired Jerry Gilbert, a highly-respected and long-time fixture in Boston restaurant management scene.  (After Jerry left Friends & Company, he became president of the Massachusetts Restaurant Association.)

A little over a year later, the result was a brand spanking new two-level, two hundred-seat restaurant and bar with offices on the top floor.  She’d built herself a restaurant from scratch.

Pam had never worked in a restaurant . . . never been a manager,  or served as a waitress or bus person.  She’d never gone to school to learn, and in fact prior to thinking about opening her own place, she really hadn’t spent much time in restaurants.

So what did she do about that now she was an owner?

She asked at lot of questions.

I’d taken over as general manager after Jerry Gilbert left (I’d been the assistant manager/bar manager a year earlier.)  Now every day when Pam and I sat down for a working lunch, we’d order food . . . and then she’d start.

“I’m going to pick your brains,” she’d say with a smile.

“What do you think about trying this?” she’d ask about some new idea.

“How can we eliminate the dead time between lunch and the night business?”

“What should we do to get our drinks out faster?”

Pam picked the chef’s brains, the floor manager’s brains, even the wait staff and bartenders were solicited.  Then she’d make her decisions based on what she’d managed to pull out of everyone.

Between all her ideas, and what she learned from others, Pam put together a one-of-a-kind place.

(One of the most interesting things about Friends & Company was that everything in the restaurant was for sale.

All the unmatching tables and chairs, the odd collection of booths, the variety of old lamps that lit the place . . . all the antique posters and memorabilia that decorated the walls . . . everything had a small price sticker on it somewhere.

Pam had furnished and decorated both restaurant levels with stuff from her Boston Flea Market.  People would meet for a first date at Friends & Company . . . then come back a few months or a year later to buy the table they’d met at.  People would have a great time at the bar, and at the end of the night take home some of the memorabilia that had been hanging on the walls.  Now back to the story . . . )

In the end, Friends & Company would serve over 600 people during busy lunches . . . turning every seat over three times each . . . and then there was the bar business, as Faneuil Hall became one of Boston’s hottest nightspot attractions.

But what about the problem of learning as you go (this is the funny part) . . .

It certainly wasn’t all beer and trophies for Pam at Friends & Company . . . along the way there were (quite) a few bumps in the road.

As smart as she was (maybe the quickest learner I’ve ever seen), there were bound to be gaps in her knowledge.

For Pam, it was a problem simply understanding her staff.  She really had no idea what their lives were like, or where they were coming from.

I remember one early meeting just before the lunch rush — a meeting to discuss recent policy changes — Pam offered a new idea.

“I’ve been thinking,” she told the gathered bartenders and wait staff, “That you all come in just a minute or two before your shift starts.”

“A lot of you seem stressed and rushed, and that might not be the best way to make sure our customers get great service.”

“So . . . ,” she continued, “I’m wondering if we might not all show up a little early. Maybe I’ll have donuts, and coffee, and juice set out . . . and we can all chill out a little, relax, and get focused on the business ahead.”

“Maybe we could do some group meditation to become more centered,” she said. 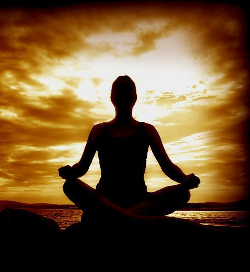 Come in a little earlier?  So we can all meditate before a shift????

Maybe only those who’ve worked in restaurants can appreciate the staff’s reaction.

Everyone sat there dumfounded.  Some of them had their mouths open, their jaws dropped.  There was a stunned silence . . .

Having never lived the life, Pam had no idea how a day begins for servers.  She couldn’t imagine being that hung-over and burnt-out, struggling just to make it to work a few minutes late.  She didn’t know that some of them used every little trick in the book just to show up showered, and in clean clothes.

I felt my own jaw drop.  (“She didn’t tell me she was going to say this!”)  It was like something from another planet — meditate together before work?  We’re talking about daytime bartenders and wait staff . . .

“Well, I could see coming in a little early,” he said with a big grin, “ . . . If we were going to play some basketball . . . some hoops!!!”  Tony was a tall black guy who lived for basketball, always playing on the streets, always talking about the sport.

Everyone burst out laughing.  I’m sure some of them thought it was hysterical, and some probably just laughed because he’d broken a dead silence.

I used the disruption to quickly scrawl a note to Pam, then turned the pad toward her.

Pam glanced at it, and when everyone stopped laughing at the chef’s comment she said, “Well,  get back to me with your ideas.  See if any of you can match Tony.”  Then she smiled and continued with the meeting.

Later in the office when we talked it over, the idea was dropped.  Now Pam just made sure that she always greeted the staff with a good-morning smile and lots of  encouragement . . . no more talk of pre-shift meditation, or being centered.

Anyway, even with no prior experience Pam Carson was still one of the sharpest owners I’ve worked for . . . but I guess there are some things you only learn from having been in the trenches.

(There’s a new feature in the right sidebar . . . Cocktail Napkin Haiku.  For the real deal on restaurant haiku, I’d recommend checking out Brittney’s blog — Same Food For Every Day.  See you next week.)