FUBAR (and then a beautiful moment)

It’s never good to leave a bartender working alone on a slow night.  There’s too much opportunity to think.

You  keep glancing at the clock, again and again.  You might listen to one of your customers, or try to focus on the closing side work ahead — but let your attention waver for one second, and you’re back to thinking.

The news on the TV is all bad, again.  Politicians, like the puppets they really are, once more screw us over with their political ambitions and aloof positions.  And while all of America loses an estimated 24 billion dollars and the world economy is threatening to blow up–these political hacks are still getting a paycheck, even as they remain asleep at the wheel.

I believe the term first originated in the military.  Soldiers with their lives on the line had to put up with the gross incompetence of their superiors–poor planning, low ammunition, and suicidal missions.  Book after book, movie after movie tells the same story.  In Norman Mailer’s The Naked and the Dead, some poor lieutenant is sent off to die with his men because his commanding general is having problems with his wife, who’s tired of his impotence.

Breaker Morant.  Full Metal Jacket.  It seems this is just the way things are.

And it’s certainly no different in the restaurant business–although the stakes, clearly, are so much higher in the military.  But even behind the bar or out on the floor, in a very small but eerily similar manner, the maddening clusterfuck rolls on.

Then this afternoon, I’m checking through the latest news, and come across this . . .

It seems a Boston-area waiter was slogging through his night when there was a quiet personal crisis at one of his tables.  Two women (possibly a mother and adult daughter) had received a cell call during their meal, and afterward they both started crying.

“I had no idea what happened,” the waiter posted on Reddit, “Until a single guy at the next table handed me this note with his bill.” 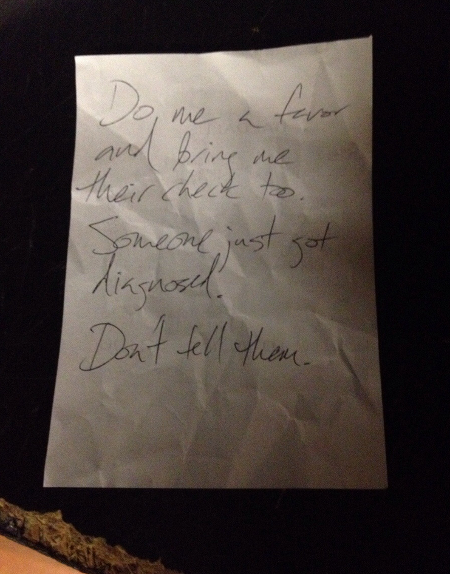 “The single guy who had been sitting next to them had been friendly to me all evening, making jokes and such. When he was finished I gave him his check, and inside the billfold was his credit card and the note that I took a picture of. I combined the 2 checks, and he paid for both. I waited until after he had left to tell them their check had been taken care of. The mother was overwhelmed with gratitude, as was I. It was a great evening.”

Some people will insist this is just another internet hoax, and skeptic that I am, I was curious why the note was crumbled. (The man who wrote the note wouldn’t have crumbled it–he would have put it flat with his credit card.  Was a hoaxster simply trying to make everything look authentic?)  But then maybe the waiter initially tossed the note into a wastebasket . . . later retrieving it for the photo.

In any event, it was a good story after this gloomy week.

(For the past month, I’ve haven’t done much beside work on that book I’ve been talking about for years.  Thanks for your patience . . . I think I’ve turned a corner, and hope to be back here posting regularly in a week or two.)

3 Responses to FUBAR (and then a beautiful moment)