Yesterday afternoon was chewed up by our top-to-bottom bar cleaning, and now the annual workers’ comp audit for the club is waiting on my desk.  I’m on a break here, trying to piece together a post for this week.

But, . . . speaking of workers’ comp . . . here are three quick, behind-the-scenes stories that we don’t want the comp insurance people to hear.

The first incident was just a minor squabble that got a little out of hand.  At a restaurant I managed, a cook from El Salvador ended up scuffling with the female floor manager.

Now they each had their own story — like two motorists with different versions of a crash.  It was the dialogue immediately afterward that seemed worth jotting down.

The Floor Manager:  (still holding a twelve-inch chef’s blade in her hand), “I didn’t stab him!  He backed into the knife I was holding!”

Going back even further, I remember another kitchen conflict where a prep cook from Brazil got into an argument with the sauté man from Venezuela.

The Brazilian picked up a large kitchen knife and threatened to gut the sauté chef if he ever yelled at him again.

Without blinking, almost quicker than the eye could follow, the guy from Venezuela grabbed a cast iron skillet, and . . . THUNNKK! . . . whacked the other guy on the top of his head.  He went down like a sack of potatoes.

What strikes me about these two incidents is that afterward they barely caused a ripple.

A day or two later, they were all but forgotten.  I hear that the cook and the floor manager still work together and are quite friendly now.  The next afternoon that prep cook apologized for his temper, and gracefully accepted the owner’s decision that he was no longer employed.  Neither involved any compensation claim.

I guess it’s just that kind of business.

But my favorite story about industry dangers and workplace shenanigans is a two-part tale that involves gunfire.

I was working at another restaurant, and the owner was having a bad day.  Bills kept piling up, deliveries were late, and everywhere he looked he saw things that just weren’t running right.

In the middle of a busy night, he went down to his office and when he came back up the stairs, he was holding a gun.

With the cooks behind the line — and the waitstaff and prep guys in the salad area on the other side — he stood in the stair doorway and took aim at the steel door at the end of the kitchen.

He fired three consecutive shots down the wide alley between the two busy stations.  Gun smoke filled the kitchen, and now there were three small, fresh dents punched into that steel door.

The workers were startled, . . . everyone stopped and looked at the owner.  But when he went back downstairs, they all simply went back to work.

Everyone was talking about it, but they were talking in low tones as they kept working.

That was it.  Three shots fired the length of the kitchen into a steel door, . . . and to them it just meant that the owner was in a bad mood.

I have to say this wasn’t a typical restaurant.  The owner was from Italy, and a lot of the staff was, too.  I guess they were accustomed to this in the old country. 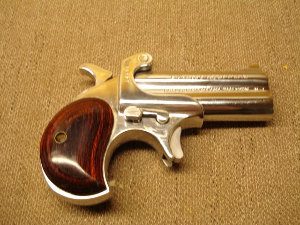 At that same restaurant, I remember a construction boss once gave our owner a small derringer . . . it was his way of saying, “thanks for a great dinner.”  (The restaurant was in a tough, ethnic neighborhood; I guess the guy thought this was appropriate.)

Anyway, that derringer would lead to one of the dumbest things I’ve ever done.

At the end of the night, everyone was gone.  I’d finished the cash out and was sitting by myself at the bar having an after-work drink.

I was thinking about the derringer, now safely tucked in the office desk drawer.

I was curious about that gun.

I went downstairs, grabbed the derringer and walked back up to the kitchen.  Standing there, I saw the steel kitchen door at the other end.

I was really curious.  I’d seen it done before with another gun, so I said to myself, “What the hell.”

I cocked back the hammer and fired off a round.

The gunshot boomed like a cannon going off.  When the owner shot at the door in the middle of business, there was all the noise from the restaurant and the city noise outside.  The kitchen had been full of cooks rattling pots and clanging pans, and the waitstaff was shouting.

Now, in the empty kitchen, the sound reverberated like a small explosion.

BAAAMMMMM!  It was only one shot, but at four 0’clock in the morning, it was very loud.

Someone in the adjacent apartments had heard the gunshot.  I knew they were running upstairs to call the police.

The police were coming!

I looked around, searching for a way out of this.

I grabbed an mop pail and a hammer, and began pounding the empty pail as though I was trying to straighten out a dent.  I did this for nearly a minute.  Panicked and pressed for time, I couldn’t think of any other alibi.

I walked rapidly through the dining room toward the front door, anticipating the arrival of the police.  I had no idea if they’d buy my story about the pail, and if they went into the kitchen they’d smell the gunpowder.

Standing at the glass front door, I saw a police car search light working it’s way down the street.  A cruiser was moving slowly, shining the narrow spotlight back and forth.

Directly across from the restaurant, the cruiser stopped and flashed the bright light right in on me standing there.

The police car sat there for a minute, then drove on.

I might have just killed three people, and waved hello.  But as I said, it was a tough, ethnic neighborhood.  I guess a wave was good enough for them.

Yup, that was one of the dumbest things I’ve ever done.  I was lucky to get away with it.

But, my break is up.  Back to the workers’ comp figures.

9 Responses to GUNSHOTS! (And the annual Workers’ Compensation audit)