It’ll be a short post this week.  I had planned to write today about “DIRTY TRICKS behind the bar,” but I’m now weighing how much I should say,  . . . and about whom.  Back next week with that post.

Instead, today’s space goes to a bartender from Cheers in Quincy Market, and to a new industry blog I’ve just seen. 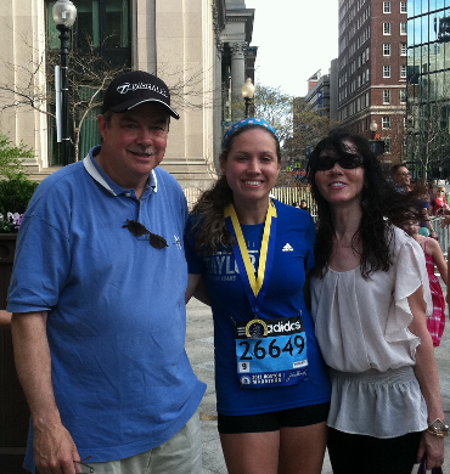 Elyce ran in her first Boston Marathon this past Monday.  I’m sure there were other bartenders among the 26,716 registered runners — but none that I knew.

Elyce is the daughter of our Sunday Blues Jam performer, John Taylor (everyone just calls him “Taylor.”)

Taylor is one of the veteran musicians at the Johnny D’s Jam, mainly a drummer, but he also performs on keyboard and vocals.  (I love his version of the song, “It’s Cold in the City.”)

Elyce came in with her boyfriend one Sunday to watch Taylor perform.  That’s when I met her, and learned that she was a bartender at Cheers.

When Taylor said she was running in the Marathon this week, I asked him to keep me posted on how she did.

Turns out, she did ridiculously well.

Not only did she finish — some 5000 runners dropped out during the race, with its unusually high, 89-degree temperature — but she looked as fresh and chipper as a bartender simply completing one of those difficult shifts.

Five hundred runners were treated at the emergency Red Cross stations along the multi-city route.  (Starting in Hopkinton, they run through Ashland, Framingham, Natick, Wellesley, Newton, Brighton and Brookline, before finishing in Boston.)  Afterward Elyce posed for pictures, and went out for a beer with her boyfriend and their parents.

Here’s how Taylor described it in his return email (I’d asked him if Elyce had made it through the entire 26.2 miles).

“Elyce did finish which was amazing.  It was her 1st time running the marathon.  She was sponsored by Sam Adams Beer thru her work at Cheers.  My wife and I were at the 23mile marker which is right after Heartbreak Hill in Brookline and here she comes running and stopped to say hello to us . . . she looked good.

Her time was about 5.5-hours . . . We met with her after the race and her boyfriend, Jon and his parents were there.  We stopped for a drink but she was only interested in getting home and taking a shower and rest.  She was a little stiff but otherwise OK.   I was shocked that she even attempted to do the race considering she had not been in track at school.

I learned something new about her determination and stamina that was an awakening.”

Now that’s a proud dad.  I’m sure I’ll hear more detail when I see Taylor at the Jam this Sunday. 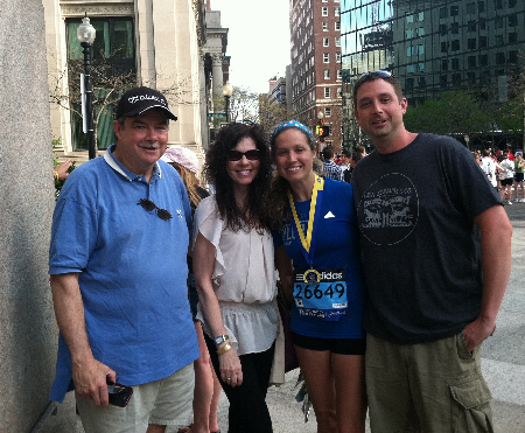 Taylor and his wife Mary, with Elyce and her boyfriend, Jon.

I got an email the other day inviting me to take a look at a new blog, Waiters Today, which bills itself as a “social network” for restaurant workers.

I’m still checking it out, but here’s some things right off the top.

First, they have a contest running right now . . . it ends May 7, 2012 . . . and there’s a $500 first prize for the best bar or restaurant story.  (One of the restrictions is that it can’t have appeared previously anywhere on the Internet — I have a tough time just putting up a weekly post, so if I can’t use something I’ve already written, I’m out.)

The site also has a chat room, and while looking around the site as a whole, I got an IM from one of its authors/owners.  (Apparently it’s a collective effort by nine Indianapolis servers.)  Andrew explained a few of the things they were doing . . . but what really struck me is this blog’s tremendous potential for interaction. 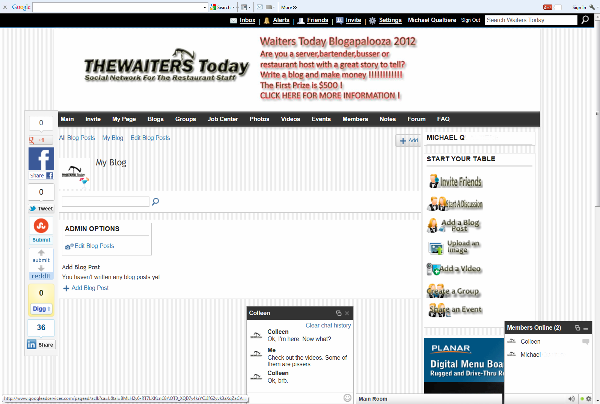 At Waiters Today, you can IM fellow members who are also online, or join them in a chat room.

This site is new, but it looks like they already have around 200 members.  It’s free to join and completely anonymous, if you want keep your identity secret.

The Photo section is interesting/strong . . . as is the Events section.  And the section called Job Center?  Well, I’m not sure how that’s going to do, . . . but overall this is definitely a site to keep an eye on.