THE PERFECT STORM (part one) 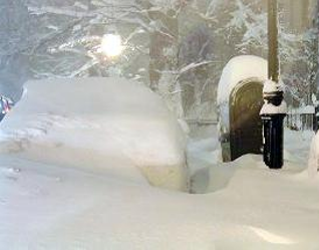 We were all drinking at 33 Dunster Street, the restaurant/bar that shared a back alley with The Sunflower Café.

A big snowstorm was forecast for the next few days and everyone was talking as though this was the end of the world.

“I grew up in Syracuse, NY,” I said during a pause in the chatter, “The record snowfall in Syracuse is something like six feet . . . Boston doesn’t get that the entire winter.  I’m really not worried.”

I’d already had a few beers.

“Then you’ll be over to shovel me out?” one of the Dunster waitresses laughed.

Everyone else laughed too, and I stood there for a second with my mouth half-open.  I imagine they all thought I’d been caught with my foot in my mouth, leaving myself open for some serious work.

The truth of it was  . .  I was simply dumbstruck.

This waitress — Terri — was a knock-out.  She was so good-looking.  She was always smiling, so full of life, with that gymnast’s body and thick, wavy blond hair down to her shoulders.

I’d see her working every time I came to Dunster Street and it was a struggle not to just sit there and stare at her.  She was so beautiful I’d never had the courage to try and talk with her, despite being there several times a week.  I’d never so much as given her a nod “hello” — I thought it would turn out that she was just staring at someone over my shoulder.

Now she was inviting me to shovel her driveway?

“Sure, no problem,” I said after regaining my composure.  I was trying to act cool about it.  “Just write down your address.”

The blizzard finally hit the next afternoon and it was brutal.  In upstate NY everyone is prepared for large snowfalls — all the cities have massive winter budgets, fleets of rotary snowplows already fueled, and armies of county workers just waiting to clean up after a storm. 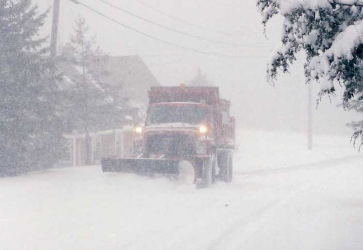 In Boston, where they’re used to more moderate weather, the city was caught completely off-guard.  Everyone seemed helpless as the snow continued to fall — even the major streets and roads remained buried under three feet of snow.

The schools and colleges closed, all the businesses closed, and the entire city virtually shut down.

Back at my apartment, I began getting dressed to head to Terri’s apartment.  I put on layer after layer of clothing, pulled a longshoreman’s cap over my head and wrapped a scarf around my face.

I lived near Harvard Square; Terri lived just beyond Central Square which was normally a twenty minute walk.  But now the snow was burying the cars on the streets and in some places the drifts rose half-way up to the telephone wires.  With the wind howling, the snow whipping around, I knew this trek would take a while.

“No problem,” I told myself as I opened my front door and saw nothing but a sea of swirling white.

I felt I had to go . . . or I’d look like a wimp after my upstate NY boast.  But of course the real reason I was venturing into this weather was that Terri had invited me, if only to shovel.

After five minutes, I began to think I’d made a mistake.

This was ridiculous weather.  It was bitter cold, sloppy, wet . . . . the snow was falling as heavy as rain, and the wind whipped around so much that it was hard just to put one foot in front of the other.  I’d lift one boot out of the three-foot drifts, and place it a short distance in front of me.  Then I’d lift the other leg up and do the same thing, and this continued step by step as I slogged along.

Step by step I was inching my way toward Central Square.  Nothing was going to stop me.

Twenty minutes later I’d only covered a couple of blocks.  Then it was an hour later, and I was only at the halfway point.

“Halfway there,” I told myself, “No point in turning back now.”

At this point it would have taken me just as long to turn around and go home . . . while in Central Square, Terri was waiting.

Two hours later she let me inside, laughing.  I was a shivering mound of snow standing in the middle of her living room.  I was an abominable snowman, breathing heavily, with only my eyes and thickly-frosted brows showing between the scarf and the hat pulled down tight.

“You are nuts!” she kept laughing, “You are certifiably insane!”

“Get out of those clothes,” she said, “I’ll get you some warm ones.” 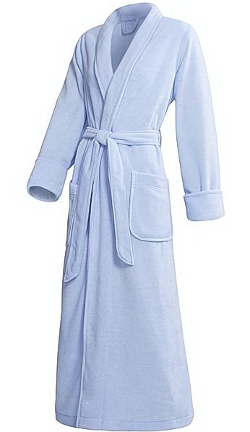 When she came back she was holding a fluffy woman’s bathroom.  She was still laughing.  “Get out of those clothes!” she said again, “You’ll catch you death of cold.”

But she didn’t leave.

She stood there in the living room, still smiling, holding the bathrobe.

So I began to peel off the layers in front of her.

When I finally got down to my underpants, she held out the robe.

After a quick shower, she had warm eggnog waiting on the kitchen table.  I’d say it was about equal portions — fifty/fifty — eggnog and Captain Morgan’s rum.

She cooked us dinner — pasta and vegetables sautéed in olive oil and garlic — and I sat at the kitchen table still trying to thaw out.  This was the first time it was just her and me.  I didn’t know her, never talked with her before.  Now I was across the table wearing a woman’s bathroom with only my underpants on underneath — and it was strangely intimate.  We began opening up about our lives, our plans for the future.

She had a degree in art and was hoping to land a job with a local, start-up magazine.  She let me go on and on about an academic paper in literature I wanted to publish . . . and how I was going to be a writer.

Maybe it was the storm conditions outside — as though we were two people huddled in a shelter just trying to survive, so it was natural to open up and talk about what really mattered to us.

Later we got stoned and watched a movie on TV.  She made some popcorn.  Once I knew where everything was I kept refreshing our drinks.

After a few hours she got up from the couch and said, “I’m going to bed.”  She stood there looking at me.

So I got up and went into the bedroom with her.

We didn’t talk about it.  Nothing was said . . . but it seemed perfectly normal, as though this is what two people do when facing the hostile elements together.

We were at it all night.  Something about those brutal conditions outside had taken away any restraints.  It felt like we were the last two people in the world, just doing what has been done naturally since primordial times.

The bedroom window was letting in the morning light when I finally rolled off, and we lay side-by-side breathing heavily.

I was the first one to get up and get dressed the next day.  It was around noon.  I felt like my knees were bending both ways as I walked into the kitchen.

By the time she got up some of her neighbors had stopped by, and we sat in the kitchen talking about the storm.  Terri made a huge frying pan full of eggs, and we all had breakfast while finishing off another bottle of Captain Morgan.  There were more bottles of various liquors in the cabinet, but we were running out of eggnog.

It took me three hours to shovel her driveway.  It was still snowing and howling, and it seemed like I was out there forever.

Another friend of Terri’s was there by the time I came back into the kitchen.  I knew him from The Sunflower Café.  His name was Charles — he was a black guy who was always laughing and joking around, and who always seemed a little high on something.

He said that the Inn Square Men’s Bar was open, and that we should all go there.  By now it was around five in the afternoon.

So we all bundled up and trekked to bar.

We started tossing down the beers, with occasional shots of Sauza Conmemorativo.

Around midnight I started wondering what was going on with The Sunflower Café, where I bartended five nights a week.  The last two days had been nights off for me, but tomorrow night I was scheduled to work.  Would The Sunflower be open?

“Of course we stayed open!” the owner told me when I called from the Inn Square pay phone.  “Can you work a double tomorrow?” he asked, “We’re having trouble finding staff who can make it in.” 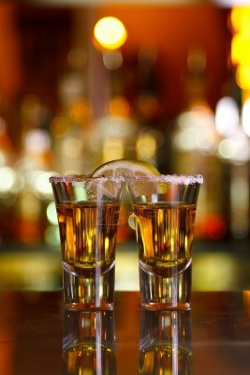 I’d already been feeling that I was on my last legs when I called The Sunflower.  The long trek to Terri’s, an all-nighter in bed — a fantastic all-nighter, but hardly any sleep — and then shoveling for hours and now drinking all afternoon, and all night . . .  I felt like I was about to collapse.  I thought I might pass out at any moment.

And now I had to be at The Sunflower at 10:00 AM tomorrow morning — to work all day and all night.  If I stayed with Terri again, I’d have to get up even earlier to trek back to my apartment in time to shower and change.

“I think I’m going to take off,” I told everyone when I got back to the booth, “Got to work a double tomorrow.”

I took some good-natured ribbing for being a quitter and Terri gave me a strange look.  I’m not sure what it was . . . a combination of looks, as though I was in some way betraying her, or that I was a disappointment to her now.

There were too many people hanging around for me to say anything to her in private.  These were all people Terri knew, both guys and girls gathered by our booth.  Everything had happened so quickly between us, I didn’t feel comfortable taking her away from her friends to talk with her on the side.  I had no idea what my status was with her.  So I had one last shot with everyone, and then I left.

It was a long, dark, lonely walk back through the snow drifts to my apartment.

It had been a crazy day, but when I finally plopped down on my bed I wasn’t thinking about anything.  All I wanted was sleep . . . and Lord knows, I was going to need it.

(Stay tuned next weekend for more of THE PERFECT STORM; part two.)

13 Responses to THE PERFECT STORM (part one)