During closing duties at the nightclub, one of the waitresses scrubbed the stainless steel counter of the service station. Only she was using an industrial steel scruffie!

“Stop!!!” I shouted. The metal curls of the steel wool will leave permanent scratches in the surface. The new, nearly invisible grooves will fill with dirt and as soon as you get them clean, they’ll fill up again. Never use steel wool on stainless steel counters!

After a brief explanation, she begrudgingly nodded her head in agreement . . . although she still wanted to argue about it. “That’s the way everyone around here is doing it,” she said.

“Then everyone has to be told why they shouldn’t,” I replied. By now she’d begun using a bar cloth instead, but she didn’t seem completely sold on the idea. She continued the conversation. “I don’t understand why I have to use a bar cloth” and “What harm could it really do?”

“Listen,” I said, in a rough attempt at humor while making a point. “The next time you use steel wool on this counter . . . I’m going to use steel wool on your nipples.” She stood for a moment with a blank expression. I could see the wheels churning as she searched for a comeback.

“Hmmm,” she said, staring straight at me. “I LOVE steel wool on my nipples.”

“Alright . . . next time I’ll use the steel wool on you for fun, and then we’ll think of an appropriate punishment.” Well, at least now maybe she’d remember. 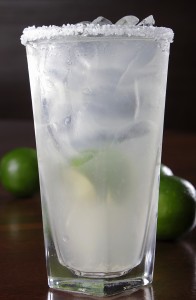 With the club area closed and the waitstaff done for the night, I stood behind the bar for the last part of the shift–the front area would remain open until 1:00 a.m. as a neighborhood bar. “I’ll have a Patron margarita for my shift drink,” one waitress said. Our house pour is 1 1/2 ounces and the margaritas are “double drinks” so we’re talking about three ounces of liquor.

She guzzled down the drink with four or five long sips through her straw. “I’ll have another,” she said.

Halfway through the second drink, she wanted to order one more. “You know,” I said, “ . . . there’s a lot of liquor in those and you’re knocking them down pretty fast.”

“Are you driving?” I asked.

“I drink these all the time,” she told me. “I know what I can handle.

“I’m just drinking fast so I can get out of here and drive home before it hits me,” she explained.

That’s not something the bartender wants to hear. She’s drinking fast so she can drive before the buzz makes her too woozy? “Listen,” I said, “I think you have two choices. You can slow down and I’ll serve you again in a few minutes, or you can make that your last one.”

“I know you can handle your liquor,” I said, “but I don’t want to worry about your trip home.”

“And a word of advice,” I told her. “When you want another drink, be careful how you explain it to the bartender.”