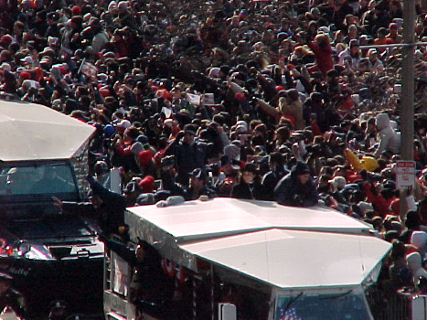 The crowd at the Pat’s first victory parade.

There was no Super Bowl parade for the New England Patriots this week.  (First, you have to get into the big game, and then win it — that means not dropping key passes during crucial playoff drives.)

But I’m thinking back to a better year now — back to the Pat’s first title win, and the celebration that followed.  That was a parade shared with my best friend, Colleen, and it involved a fur coat, a daring escape from the maddening crowds, and finally, a lost trophy.

I was working behind the bar the night of Super Bowl XXXVI, stuck in Boston while Colleen was off in Connecticut.

She’d driven from New Hampshire to join others at the home of her friend Tom — and it sounded like a hell of a party.  On Friday night they all went into NYC’s Little Italy for dinner at Tom’s favorite Italian Restaurant.  On Saturday they were off to the Mohegan Sun Casino to try their luck at the tables, and then on Sunday they settled into Tom’s plush residence to watch the game.

“It wasn’t quite a mason,” Colleen later described Tom’s home, “But it was close.”  On two acres of land in the most expensive section of town, Tom’s home had a downstairs sauna, an outdoor whirlpool, and a large game room with a huge, big-screen TV.

There was a pool table in the game room which was in constant use, as well as pinball machines, two large arcade machines, and a full bar with Tom making drinks behind it.

While Tom and his daughter, and eight or nine of his close friends were watching the Super Bowl, the doorbell rang.

None of the guests believed him, so Tom took a few of them to the front door to see.  Through the windows they watched as the dog waited for Tom to let him inside.

Then Tom let Zeus in, with everyone laughing and patting his head and back.

Anyway, the thing I want you to remember about this party is that all Tom’s friend were “high-rollers”, so Colleen took only good clothes to the gathering.

The Patriot’s were 14 points underdogs, but near the end of the game with seven seconds left, they were tied 17 -17 with St. Louis — and a 48-yard field goal could win the Super Bowl for them!

“We won!” Colleen was shouting over the phone when she called me at the club, “We won!”  I could barely hear her.  With the cheering from Tom’s house in one ear, and the noise of the celebration in our nightclub behind me, it took several minues for each sentence to be repeated.

I asked Colleen when she’d be driving back, and it turned out that she’d be passing through Boston on her way home to New Hampshire . . . on the day before the victory parade.

“Why don’t you stop here, and we’ll see the parade together,” I shouted over the phone.

“What?” she shouted back.

The following day I reserved Colleen one of those bread-and-breakfast places in downtown Boston. 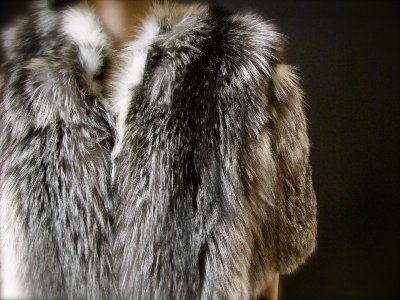 When I came back the next morning to pick her up for the parade . . . she was wearing a mink coat!

(Ed. note 2/23:  Colleen is back from her FLA vacation and the first thing she did was correct me.  It was her fox fur coat she had on that day, not one of her minks. To me, they’re all “mink coats.”)

She was about to head out into over one million people crowding the streets.  People would be spilling beer from their plastic cups, splashing ketchup and mustard from their hot dogs, perhaps some of them drooling . . . and she was wearing a mink coat.

“This is all I brought with me to Connecticut,” she explained.  (Of course — I hadn’t thought of that — for a party at Tom’s she would have only taken good clothes.) 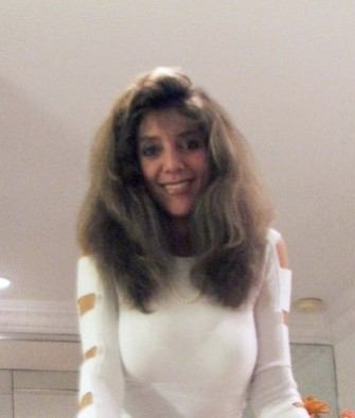 Colleen on the balcony of that bed-and-breakfast.

“Well, I’ll just go like this then,” she said taking off the mink.  Now she stood there wearing just a white sweater and slacks.

This was in February.  It was brutally cold outside, freezing.  There was no time to head to my place to get her something else to wear, and she wouldn’t take my coat.

So we left the B & B, and stopped at a discount clothing store on the way to the parade.  I bought her a short ski-type jacket, nothing fancy, but warm, cute and it only cost $39.99.

“It’s a good bop-around coat,” she said, trying it on in the mirror.  (She still has it today.)

Then we headed back out onto the streets, where it was insane.

For blocks and blocks, there was nothing but people.  People were shoulder-to-shoulder, touching butt-to-front . . . everyone crammed together as tightly as an over-packed elevator.

We wanted to be at Government Center, where Bill Belichick and the players would address the crowd, so we worked our way along the sidewalk toward the nearest “T” station to catch a subway.

We were literally inching our way through the crowd.

Inside the train station, layer after layer of people waited ahead of us.  After a trolley car finally picked up the first layer, everyone shuffled forward a couple of inches and another layer of people crowded in from the turnstiles behind us.

We were only two trolley stops from where we wanted to be — maybe a ten minute walk above ground — but there were too many people up there to walk anywhere.

We were stuck.  It looked like this would take us forever.

Then we heard someone in the crowd shout out, “Follow me!”

There was a man working his way along the narrow open space against the back wall.  “Follow me!” he was shouting, “Follow me!”

He was only ten feet away . . . so I grabbed Colleen’s hand, and we followed him.

The guy opened a door at the end of the wall; the sign on the door read:  “DO NOT ENTER!”

By now other people were joining the line behind us.  “Where are we going?” someone way back yelled.

“I have no idea!” I shouted over my shoulder, “Maybe the guy knows a shortcut!” 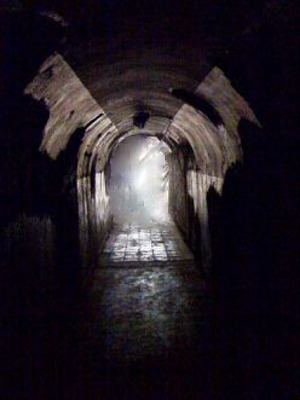 This is something close to what it looked like.

The door led down into a narrow tunnel lit only by those dim bulbs in their small metal cages.  They were strung along the wall in a connecting line as we lopped along.

“Follow me!” the guy kept shouting.  His voice echoed back through the dark, winding tunnel.

It was like something from Raiders of the Lost Ark.

Maybe five minutes later, we came to some stairs leading up.  When we exited a door, we were at the Park Street stop.  We must have walked underground beneath the Boston Commons.

We finally made it to Government Center where there were an estimated 1.4 million people in the area with us.

“There are more people standing in these couple of blocks than every man, woman and child in New Hampshire,” I told Colleen, referring to her adapted state,  “ . . . And that includes all the cows living there, too.”

She punched me on the arm.

I looked behind us . . . less than fifteen feet away, on the other side of the street where we were standing . . . there was a bar. 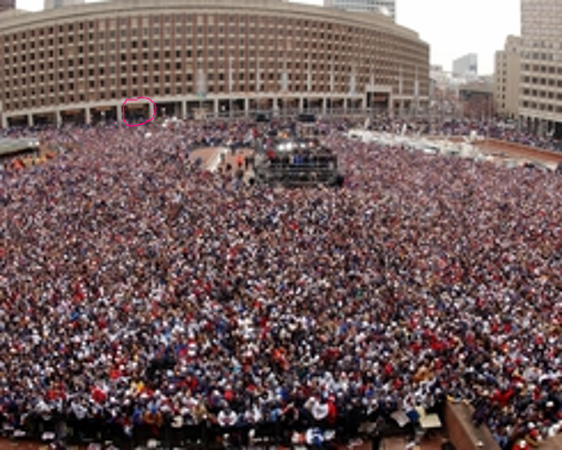 The crowd gathered at Government Center. The bar is circled . . . it was only a few feet behind where we were standing on the street.

“Come on!” I said, dragging Colleen with me.

We got inside just in time . . . we squeezed by as the doorman was telling everyone that they’d hit capacity, and no one else would be admitted.

Inside, we were warm and toasty.  We could still look out the windows . . . in fact, we had relatively the same view that we’d had outside, but now we could hear what the players were saying from the broadcast on the large screen TV’s.

Perhaps more importantly . . . now we were in a bar!

Someone was just leaving and we lucked out with a seat for Colleen at the bar.  All around us people were cheering and celebrating.

I was drinking beer, but as the Patriot players continued to take turns at the microphone, Colleen said, “Order a martini next time.”

“I want to steal two of these glasses,” she said.

I protested at first — I work in this business, I didn’t want to be a jerk — but then Colleen called the bartender over. 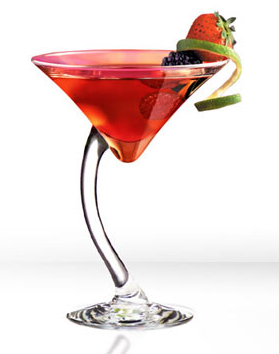 “You wouldn’t mind if we took these glasses with us, would you?” she smiled at him, “These will be my trophies.”

“Naw,” he said, “No one’s going to notice something like that today.”

So I ordered an extra-dry Bombay martini.

As we left, I threw down another twenty on top of the tips already on the bar, and we took the now-empty glasses with us.

We walked down Tremont Street, headed back towards the subway station.  As we crossed a side street, right before you get to the Omni Parker-House Hotel . . . I hit a patch of black ice.

Seriously, I wasn’t drunk . . . a little buzzed maybe, definitely not drunk.  But now as we finished crossing the street, and I stepped onto the sidewalk in front of the hotel — I hit a patch of black ice.

Suddenly both of my feet went up in the air . . . they went up so fast I didn’t quite know what was going on.  Suddenly I was up in the air, stretched out like a plank of wood, parallel to the sidewalk.  And I was coming down fast.

I’d gone from walking upright to flat-on-my-back, with no break in between.

People were walking by, trying not to look at me lying there on the sidewalk.  Colleen couldn’t stop laughing.

I was fine, but I had been carrying one of those stolen martini glasses in my coat pocket (she had the other one in her purse.)  When I pulled it out now, it was in two separate pieces . . . the base/stem, and the V-shaped goblet part.

“Don’t worry about it,” Colleen said, as we continued to walk toward the train station, “I’ve got one . . . that’s good enough.”

I knew she was disappointed; she’d wanted a pair of them.  She was trying to make me feel better.

But at least she still has that one “trophy,” now hidden in the back of her glass cabinet.  It was one hell of a Super Bowl parade.

(Ed. Note:  I’m sitting here typing in a dark apartment lit only by the glow of the laptop, as I try to get this posted before my battery runs down and the place becomes completely pitch black.  We’re in the middle of a blizzard in Boston . . . one of the worst Nor’easters in New England history.  Three feet of snow, freezing temperatures, the wind gusts hitting 60 miles per hour, and power outages that include my street.  And where is Colleen . . . ?

She happens to be in sunny Florida.  She’s down there for three weeks at her parent’s winter home to celebrate her father’s eighty-sixth birthday — I told her not to mention the weather when I call, but so far she’s done just the opposite.)

8 Responses to A SUPER BOWL PARADE