A TALE OF TWO WORMS 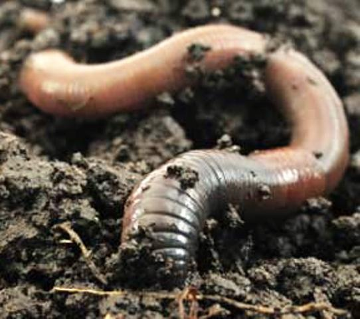 Here’s two stories about my least favorite industry type — the low-living (slimy) restaurant worm.  I won’t say where the following incidents took place, but they both happened a long time ago, and definitely not where I work now . . .

A great crowd, good food, a decent boss . . . this should have been an aces job.

Tips were more than adequate, and there were plenty of nice employee benefits — like free shift meals, free after-work drinks, and half-price on food and drink if you stopped by on a day off.  But then a restaurant worm wiggled his way onto the staff, and things began to change.

What exactly is a “restaurant worm?”  I’m not sure there’s a set, standard definition but to me it’s someone who really works at complaining, someone who finds trouble even if essentially nothing is wrong.  And they’re not satisfied until they have everyone else on the staff complaining right along with them.

We all bitch and moan — sometimes to relieve tension, other times because things really are screwed up.  But this person will complain when the sun rises in the East, simply because it’s their nature to piss and moan.

The “restaurant worm” may only be one in several hundred — or even one in a thousand — but you know what they say about just one rotten apple in the barrel.

Anyway, this new guy had been hired to work the bar, and at first he didn’t seem like a bad sort.  He was a graduate student at one of the local, prestigious universities — tall, good-looking, with a sense of humor and athletic background.

But it wasn’t long before it became clear nothing was ever going to be quite right for this guy.  Even rules and procedures that made sense, that made the place work . . . they just rubbed him the wrong way.

Suddenly all those great employee benefits weren’t good enough for the new bartender.  It really bothered “Mark” (I’ll call him) that his girlfriend, and her friends, didn’t get the employee discount when they came to see him.

Why couldn’t he have the steak or shrimp for his employee meal?  Why did the free shift drinks have to end when the closing manager was ready to lock up?  Didn’t the owner realize that they were just getting started?

It was amazing to watch how easily the staff let Mark get under their skin.  “Psst . . . Pssssst! . . . Psssssst!”  He just kept working on them.

I felt like saying:  “Mark, if you’re going to behave like a little girl, where’s your little skirt?”  But at that point, I was just trying to keep my nose out of things, all of it.

It was sickening to watch, though, as Mark buttered-up the owner, and then once he left trashed him simply for being nice.

It didn’t take long for the less-experienced staff to develop the same attitude.  Soon they were all just as bitter Mark — and suddenly everything about this job was wrong.  The rules were the same, the customers were the same, the tips were still great . . . but under Mark’s influence, some of the staff began to openly complain about how much this place sucked!

It spread like a cancer, like gangrene.  From one person to the next, until some of the staff had worked themselves up into a frenzy.  A few of them quit.  Content before, now they could no longer stand working here.

Some of the staff got fired because their attitudes had spun so seriously out of control.  (They weren’t as slick, or as good as Mark at being two-faced about it.)

I eventually left, too . . . tired of the downward spiral in everyone’s mood.  It was time to move on anyway.

But it was a shame to watch one restaurant worm so easily, and so single-handily start a lemming-like rush to the sea.  It had been a decent place to work, and as you know there aren’t a lot of those places out there.

(I later heard through the grapevine that the owner eventually fired Mark.  He caught Mark giving away entire trays of drinks to a cute waitress.  They were trying to steal enough money so that they could support their coke habits — they wanted to party together all night after work.  Mark was now cheating on his girlfriend.

I have to say that when I heard he’d been fired, I felt pretty good about it, even though the place no longer personally concerned me.)

I suppose another type of “restaurant worm” is the person who tries to get ahead not by being productive, or doing a good job . . . but by being a total kiss-ass.  By scheming, lying, and stabbing fellow employees in the back. 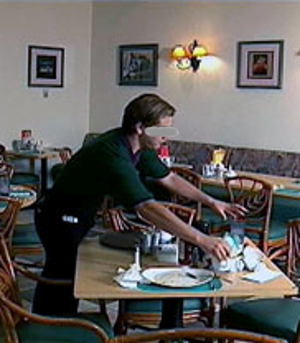 I was the bar manager at a restaurant when a new guy got hired to fill in here and there on the floor.  I actually helped him get the job . . . I put in a good word for him.   He was a customer who’d been unemployed for a while, and I thought he could handle the low-level stuff he’d be doing.  Busing tables, running food, stuff like that.

My mistake.  I guess I didn’t know him well enough.

Now all puffed-up because he finally had a job again, apparently this guy (I’ll call him Bob) wanted more.  There was a rumor circulating of a possible opening a little higher up in the restaurant.  Nothing was definite, but if this position did open up, Bob saw himself as someone in the running.

Since Bob would be in competition with two other employees, I thought it a little curious that suddenly he wanted to talk with the owner — he wanted to inform the owner of all the complaints he’d been hearing about one of his potential job-rivals.

During a meeting with managers and the owner, Bob proceeded to trash this other guy.

According to Bob, this other staff member had pissed off a lot of customers, and the place was losing a lot of business because of him.  But I’d seen this staff member loan Bob money when he was out of work.  At the bar, I’d watched him buy Bob drinks when he was broke, and even buy him meals.

And now Bob was throwing him under the bus.

What made it worse, as I listened, was that nothing Bob was saying seemed to be true.  I felt he was just making the stuff up.  It was total bullshit.

“Jeez,” I interrupted for a moment, “I’m on the bar those nights every week, and I never saw anything like that.”

“Oh, you wouldn’t,” Bob replied, “He always stops just before you come in.”

(In a twisted sort of excuse for him, I think it’s fair to say Bob probably had quite a few drinks before he showed up at the meeting.  He wasn’t as good a liar that night as he normally would have been.)

“Why haven’t I at least heard about it?” I asked, “Has anyone else noticed?  Who else has seen this?”

“Oh, everybody’s seen it,” Bob assured us, “But they probably won’t tell you.  They’re all afraid to talk.”

Everyone has noticed, but Bob is the only one not afraid to say something?  And we shouldn’t ask anyone else because they probably won’t want talk want to about it?

Later that same meeting, Bob also tried to bury his other competitor.

“It’s funny you should bring him up,” the owner said to Bob when he mentioned this second potential rival.  (By now the owner knew what was going on.)  “It’s strange because we were considering him for a new position.”

“Well, to be honest,” Bob said thoughtfully, as though just thinking of it, “I don’t believe you really want to use him.  He has all these hidden issues.”

And then he started in full-steam on the second rival.

I’ve never seen anything like this before.  I know it happens all the time, but typically it happens behind people’s backs, on the sly, and I’d never been in a position to see it first hand.  Rightfully unsure of his own limited merits, Bob was trying to worm his way up the restaurant ladder.

How can you sling bullshit and trash someone who has helped you when you were down and out?

Surprisingly, I believe Bob still works at the place.  He was still there when I left, although he’d been demoted, relegated to working one bussing shift a week (on the slowest night.)  I still can’t understand why the owner didn’t fire him.  Maybe it was out of pity.  Anyway, it was the first time I’d seen anything of that kind, and I remember thinking after the meeting that I hoped it would be the last.

4 Responses to A TALE OF TWO WORMS