BY THE SKIN OF HER TEETH 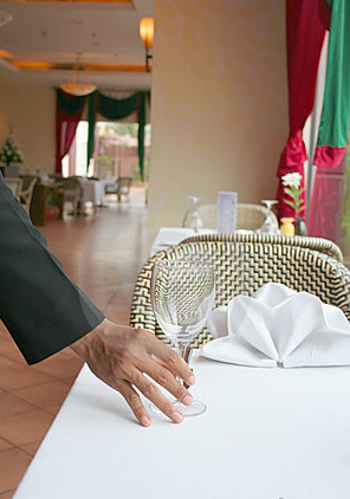 Here’s something that might amuse those of us who work in restaurants and bars — although it will probably offend just about everyone else.  It’s a real-life story about dodging a complaint bullet, and getting away with something when you’ve been caught dead to rights.  (This comes from a friend who works as the GM in a popular restaurant in the Boston area.)

It seems last weekend this GM’s regular floor manager took Friday night off, and the restaurant’s head waitress was filling in for for him.  As you might expect everything that could go wrong did, and she was struggling from the get-go.

One of the food-runners didn’t show up, a waitress called in sick, and of course it was even busier than usual.  This fill-in floor manager was running around simply trying to keep her head above water.

Then in the middle of the rush, a man came out of the rest rooms so angry he just about had smoke coming out of his ears.  His arms were waving.

“I’m never coming to this restaurant again!” he shouted as he approached the host desk, “I’ve been coming here for years, but this is the last time you’ll see me!”

“What seems to be the problem, sir?” the temp floor manager asked politely.  She managed to steer the complaining gentleman off to one side.  “Tell me all about it,” she said.

The gentleman said that he’d been in the men’s room, and he’d seen one of the restaurant’s kitchen staff walk out of a stall . . . and then this worker left the bathroom without washing his hands!  Apparently the guy didn’t even look at the sink as he ran out, zipping up his fly.

“I couldn’t believe it,” the gentleman said now, “Is this the type of establishment you’re running?  All these years I’ve been coming here . . . all the times I’ve eaten here . . . and this is what’s been going on?”

The customer went on to describe the employee, and the poor hostess/head waitress immediately recognized which kitchen worker he was complaining about . . . she knew exactly who it was from the man’s description.

Her mind was racing.  She was looking for a way out of this.

She had only a split-second to respond.  I can picture her standing there with the smoking wheels spinning in her head.

“No, I don’t think I know the person you described,” she now answered slowly and calmly.  “No, . . . that really doesn’t resemble anyone who works here.”

“No, wait,” she went on, as though thinking it over.  “Wait, . . . it must have been one of the construction crew.  They’re putting in a new floor downstairs.”  (Of course, there were no construction workers downstairs, no new floor being installed.)

“One of the construction crew?” the gentleman snapped back in disbelief, “He was wearing one of your restaurant’s shirts!”

“You can even buy one,” she continued smiling, “What size do you wear?  Would you like me to bring it to your table?”

Within a minute or two, the floor manager had completely convinced the gentleman that it wasn’t one of her employees.

“Don’t worry about it,” she told the man, “I want to thank you for being concerned.”

“But I assure you,” she continued, “No one from our staff would ever be so negligent.”

“I want to thank you again for your concern,” she said as she lead the gentleman back to his table, “And when you folks are ready for dessert, please let me know.  It will be on the house.”

Then the temp floor manager went into the kitchen where she took the cook aside, and reamed him a new _____ (one).  “Don’t you dare go back out into the dining room again . . . for any reason!” she told him, “You stay in this kitchen until I tell you it’s OK to come out!”

(In fairness to the employee, there are three hand-sinks in their kitchen installed exclusively for that purpose, but that didn’t matter.  The floor manager definitely didn’t want the customer to see this cook again.)

Later, she went back to the gentleman’s table, and asked if they had decided which desserts they’d like.

6 Responses to BY THE SKIN OF HER TEETH