AN OWNER’S FOLLY (The king and the tide) 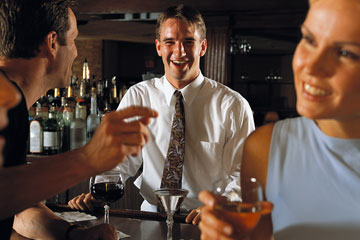 (One more bar post involving an Aesop’s fable . . . I can’t help it, those old scribes knew what they were talking about.)

I’ve known Jake for years. I trained him as a bartender when he was a few months away from his twenty-first birthday. It was like watching someone grow up, not as a parent watches a child, but more like a coach working with a new recruit and enjoying their progress in the game.

And to Jake, it always was a kind of sport, a game. This was his first real restaurant experience, but he had skills to burn. He was smart, coordinated and quick with his hands, and he liked to work hard. In a very short time he was cranking behind the taps, then gradually we began to run the bar together.

Jake was an easygoing, good-looking guy and the women loved him. There was one blonde girlfriend after the other. He’d bust his ass during the shift, drink hard when it was done, and at the end of the night go home with another hot babe.

Then he met someone he wanted to stick with and after a while they began living together. I could see the change coming. His girl had a serious, professional job. She worked days; he worked nights and weekends. Now he wanted to take off as soon as the shift was over, barely tossing down half a beer after work. I guess we were expecting it, but it was still disappointing when he told us he had another opportunity and would be leaving. He’d been hired as the day manager for a well-known Boston restaurant.

“You don’t know what it’s like out there, Jake,” I warned him. “We’re working for a great owner here. You might not find that where you’re going.”

It was true; we had an owner who treated us with respect, who was more than fair . . . and just as important, was willing to listen. Seriously, how often do you find that in the restaurant/bar business?

“I have to see what I can do,” Jake explained. “It’s a career move. Full benefits, better hours . . . my girl hates me working nights.”

“Just expect to be surprised,” I told him. “You’ve got it pretty sweet here. You have no idea how many insane owners and bad bosses are out there.” Over the next few months Jake called me at home now and then. He’d tell me how things were going and he’d talk about his new owner.

Then this week Jake mentioned his new owner only liked those people who unfailingly agreed with him. They were the ones the owner gathered around him, the ones he listened to. It didn’t matter what the owner said, or how ridiculous his ideas, all the owner heard–from a staff trying to get along with him–was how smart and wonderful he was.

Apparently Jake’s new owner felt like an omnipotent ruler. He thought he could just lift his finger and point, and splendid things would happen . . . often with results that were disastrous for everyone.

While listening to Jake on the phone, another Aesop’s fable came to mind. I reminded Jake of the old story about The King and The Tide. Everyone around this king told him how wonderful and powerful he was, trying to curry his favor. “You’re the most powerful king in the world,” they’d tell him, “there’s nothing you can’t do.”

One day some peasants came to the king with a complaint. Every evening, it seems, the tide would come in and wash away whatever they were working on. Surely the king, as powerful and brilliant as he was, could do something about this. 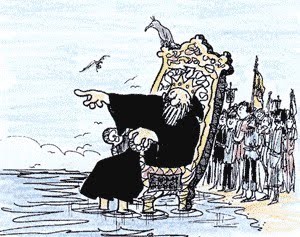 So they carried the king on his throne down to the beach. As the tide came in, the waves washed over his feet while the king sat majestically on his throne. And the king declared, “Stop! I command you!” He raised one hand as he spoke to the encroaching tide. “I command you to stop!”

Of course, the water kept rising until it was up to the king’s ankles and then up to his knees. Soon the peasants turned away and left him there. Some of them may have been snickering behind the backs of their hands.

The king’s foolishness seems exaggerated and cartoon-like–but haven’t you all seen at least a hint of this delusional attitude . . . maybe in one of the bosses you’ve worked for or have known.

I was tempted to tell Jake that he should have stayed where he was; good owners are hard to come by. Instead I said, “Well, it could be worse.”

“If you were in the military,” I told Jake, “you might still have people above you who don’t know what they’re doing . . . and their poor decisions could cost your life.”

I asked him if he’d read Norman Mailer’s The Naked and the Dead, where a squad is sent on a suicide mission by a commander who thinks he is God, and is in a pissy mood.

I understand that the rank and file has to put up with bad decisions coming from the top–whether in the bar business, in office work, or at any job. “But how would you feel,” I asked Jake, “if you were being sent to your death because some desk-bound, superior officer was an idiot.”