(This note is from Johnny D’s, a Boston area restaurant and nightclub owned by the DeLellis family.) 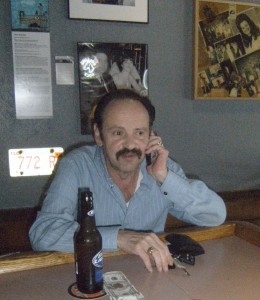 Kenny Branco is a great guy.  He’s been a regular at the club for twenty years.  He’s a real estate agent who does so much business at the bar we should charge him rent.

He sits with a cold Bud Light in one hand and a cell phone in the other.  It’s not unusual to see him with TWO cell phones, one at each ear.  “I want you to make them an offer,” he’ll speak into one phone, “I want that property, but don’t go higher than $450,000.”

Sometimes he looks like a cartoon character, a short Portuguese man with cell phones held at each ear.

We love Kenny, but we also love to bust his balls.  That’s the guy everybody likes best, the one who gets a hard time.  “Oh no . . . look who’s here!” we’ll say when Kenny walks in.

Kenny had a new cell phone, a private listing, and he was determined that none of us would ever have that number.

But we managed to get it when he left the phone on the bar and went to the men’s room.  After a few minutes, one of the bartenders used the back phone to call Kenny’s cell.  He breathed heavily into the phone until Kenny hung up.

Eight or nine times that afternoon Shawn Day rang Kenny’s cell and Kenny sat at the bar yelling for him to knock it off, that this was a business line, and stop calling him.  “I know that’s you, Shawn!” he screamed into the phone.

Then he abruptly stopped talking, phone still at his ear.

Auntie Rosie, his mother’s 80-year-old sister, must have said something about telling his Mom.  “Oh, no Auntie Rosie! I don’t think that’s necessary.  No, don’t tell Mom!  You see, this bartender kept calling . . . ”.

Kenny was still trying to explain what happened to his aunt as he walked out of the bar.  He couldn’t hear above the laughter.