(This note is from a recent night when John Bonaccorso and I were closing Johnny D’s.) 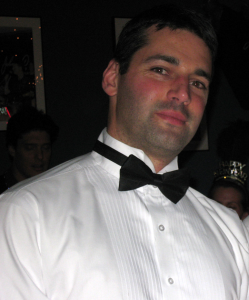 John Bonaccorso is a really, really good-looking guy. Sometimes I wish I could hate him.  He always has a stunning girlfriend, usually blond, and beyond that every woman who comes into the club can’t wait to talk with him. But heavy is the head that wears the crown.

We were closing Johnny D’s that night, having a drink and talking while I restocked the coolers with bottled beer and John recorded the empty liquor bottles. “I think she and I are quits,” he said as we worked, talking about his current girlfriend. He’d been unusually quiet throughout the shift and now I was beginning to understand why. “I think it’s over,” he said.

This woman and John had been dating forever and wound up living together. They were planning for the future, talking about buying a house, and it looked as though John might be ready to settle down.

He talked about her being too needy, and him wanting more time to himself, more room to breathe. He talked about the usual ups and downs in a relationship, but he said there didn’t seem to be any magic now, the enthusiasm that had once made any problem between them seem small.

“I don’t know what happened,” he said, as we poured another glass of beer and finished the closing. “If I look back at the way she and I were, and the way we are now, I can’t even figure out how we went from point A to point B . . . I never saw it coming. I just woke up and suddenly I’m the middle of a terrible relationship. She and I, both, are in a terrible relationship.”

“How did this happen?” John was asking himself more than talking to me. “How did things become so bad, with neither of us aware it was happening.”

“There’s an old Italian parable,” he said as we sat down. (I’m half-Italian too, just like John, but my parents split when I was a kid, so I wasn’t raised Italian.) “They say,” John continued, “That if you toss a frog into boiling water, it will jump out so quickly that you’ll never have a chance to slam down the pot lid.”

“But if you put a frog in lukewarm water, and gradually increase the temperature, that frog will stay in the pot until it’s dead.”

“That’s the way I’m feeling now,” he said, as we locked the club door behind us

1 Response to THE DROWNING FROG