EDDIE VEDDER IN THE HOUSE 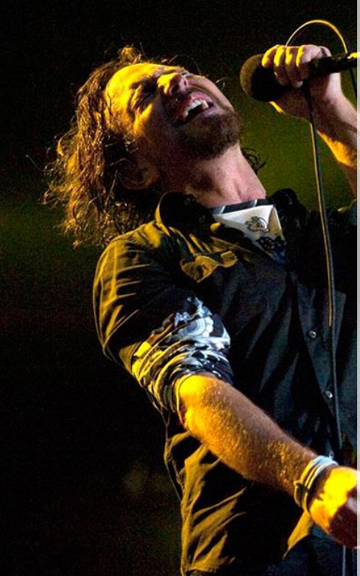 But what was with all the Eddie Vedder references?  Apparently Pearl Jam has a new CD coming out, and during every night’s game they broadcast Pearl Jam music and mentioned the band’s lead singer.

So I guess I’ll tell a Johnny D’s “Eddie Vedder” story from one Monday night a while back.

Shawn Day used to work with me on Monday’s behind the bar; we had a live Salsa band and dancing until midnight.  Back then (ten years ago) Shawn was single, and a wild man.  He downed shots of Patron tequila, followed by pint after pint of Fat Cat ESB (a great local beer at the time.)

Shawn was living the life, bartending to the hilt.  He knew everybody, everyone knew him, and they all loved him.  Just to give you an idea of how popular he was, I was genuinely sorry for the guy who replaced him.

When Shawn finally left the bar, he was replaced by Greg — also a great bartender, a good guy, and a funny bastard.  But everyone missed Shawn.  One night a customer paid Greg a rare compliment.  “You’re good,” the customer said after a few hours of slam business at the bar, “You’re good, and you’re not a bad guy.”

The customer paused for a moment, as Greg’s face lit up with a little smile of appreciation.  “You’re good,” the customer continued. “ . . . But you’re no Shawn Day!”

Everyone at the bar laughed for a long time, everyone of course, except Greg.

After that, customer after customer began repeating the same thing time and again.  It became something of an insider’s joke among regulars, and then even some of the staff started using the line.

Greg would be cruising, making all the customers laugh.  (He did have a great sense of humor; he had talked everyone into called him “G Money,” just because he thought it sounded cool.  He was a riot behind the bar.)  But after doing absolutely everything that a bartender could possibly do, at some point when he least expected it, someone else would drop the line.  “Nice job, Greg,” someone would say, “ . . . But you’re no Shawn Day!”  Followed by raucous laughter from everyone.

Anyway, at the time of this story Shawn was still bartending at the club, and we were working the early part of a Monday night when a non-descript sort of guy sat at the end of the bar.  Shawn turned to get to him, but then he stopped after a step or two.  He stood there for a moment looking at the guy, then he turned back to me.

Shawn was a big Pearl Jam fan.  I knew of the band, although I wouldn’t have recognized its lead singer from Adam.  But when Shawn went down to the guy he blurted out, “Eddie Vedder!  I can’t believe it!  I can’t believe I’ve got the chance to serve you!”

Eddie was in town for a concert with Pearl Jam at Great Woods (now known as the Comcast Center), in Mansfield MA.  Shawn put Eddie’s first beer on the house, then took money for the next beers out of our tip jar.  “Go ahead,” I told him, “Might as well make him feel welcome.”

Shawn got Eddie to sign a series of autographs on cocktail napkins — one for himself, I think one for his girlfriend, one for a nephew who was also a Pearl Jam fan.

Basically I tended bar while Shawn shot the breeze with Eddie Vedder.  Shawn told him about the other places in the area he might want to hit; an Irish bar called The Burren for a pint of Guinness.  A small place in Porter Square called Toad, where local musician Tim Gearan played every Monday.

When Eddie left, he was shaking hands with Shawn as though they were best friends.

Shawn got out early, as always on Monday’s, and when he walked into Toad he was telling everyone that he’d met Eddie Vedder!  He’d served Edder Vedder!

In those days, Mike Byrne was a weekend doorman at Johnny D’s.  He just happened to be drinking at Toad that night.  Byrnsie was around 5’ 11”, and easily 300 lbs.  He had arms thicker than most people’s thighs.  His chest was the size of a wooden barrel, and he had no neck.  Once I told him that he was a living reincarnation of Archie Bunker, from “All in the Family,” and Byrnsie took it as a compliment.

This went on and on . . . until Eddie Vedder walked into Toad, apparently done with his Guinness pints at The Burren.

Eddie stood inside the front door, and was looking around the bar just as Byrnsie finished ragging on Shawn one more time.

“Shawn!” Eddie shouted as soon as he spotted him.  The way he said it, you would have thought these guys were old college roommates or something.  Everyone in the bar turned to look at Eddie standing at the front door.  “Shawn,” he called out, “Let me buy YOU a beer for a change!”

Byrnsie just sat there with his mouth open, for a long time.

When Toad closed, Eddie went back with a small group to Tim Gearan’s apartment.

Tim’s wife, Paula, who had been a waitress at Johnny D’s, brought out snacks and cold beers for everyone.  After a while, Tim picked up a guitar and began singing, “Ain’t no sunshine (when she’s gone.)”   He played the song real slow and soulful, until Eddie grabbed a second guitar, and began playing and singing along with him.  The two of them sat in Tim’s living room, creating the most beautiful music.

“It was unbelievable,” Shawn told me the next day, “I mean, I had tears in my eyes from the way these two were playing.”

The next night, at the Pearl Jam concert, Eddie stopped to announce to the 20,000 fans in attendance that he had felt so welcomed on this trip to Boston.  He told about meeting a bartender, and the night at Toad, and about how he ended up playing with a local musician in an apartment after hours.

“This song goes out to all those people who made me feel so at home here,” Eddie said, “They know who they are.”  And then he started in on that slow version of  “Ain’t no Sunshine.”

It’s always nice when a rock star stops at your bar, and turns out to be just a regular guy.  I was stuck working the night of the concert, but Shawn and a few others used the free tickets Eddie got for them . . . and they all said it was a blast.

(You can hear Tim Gearan Friday nights at Atwood’s Tavern.  If you do stop in, make sure to say hello to Randi, the rocking, multi-talented booking agent at Atwood’s.  Bill Withers singing his hit, “Ain’t no Sunshine,” is below.)

5 Responses to EDDIE VEDDER IN THE HOUSE