HOW I GOT MY NAME

My mother, my sister Kathy and me, as my mom graduated with a B.S. in Education

A thought occurred as I was writing the last post.  Someone out there reading about Free Beer, Joey Cigars, or Sal (no pizza!) — someone might read this blog and say, “Hey, I once knew a guy who met all the same people in the same places, a guy who did exactly the same things, but his name was Mike Dunford!”

Yes, it‘s true . . . but not because I‘m stealing anyone‘s identity or stories.  I was Mike Dunford, from grade school through college, and for quite a few years afterwards while bartending.  Dunford was my stepfather’s name.  And it was my name, until I changed back to my original surname, Qualtiere.

This has caused some confusion with my old college buddies, a few former girlfriends and the people I’ve worked with over the years behind the bar.  A lot of them remember me as Mike Dunford.  But what can I do?  My name has been through a number of changes, and it’s been happening for years, even before I was born.

When my father’s dad came to America from southern Italy, his name was Gualteire — pronounced Gall – Tear (as in tear a piece of paper) – E.

That name was somehow changed when my grandfather arrived at Ellis Island.  My aunts used to tell the story.  Tobias Gaulteire was led away shouting — “Gaulteire!  Gaulteire!” — over his shoulder, while the clerk at the desk kept saying, “Yes, Mr. Qualtiere. Welcome to America, Mr. Qualtiere.”  (The new name was pronounced “Qual – tear,” as in tear drop.)

So I was born Dominick Qualtiere, Jr., son of Dominick Sr., who was the middle boy of Tobias (now) Qualtiere.

There were a lot of Dominicks in the family.  It seemed all the boys had “Dominick” in their names, and all the girls had “Theresa.”  There was one cousin everyone called “Dominick,” another was “Dom,” and my father was known as “Mickey.” 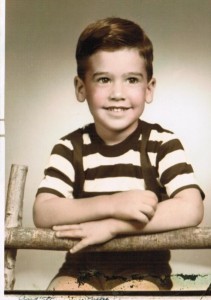 I was “Little Mickey” until my parents got divorced.  I can’t imagine my mom really liked that name, after finally leaving Mickey Sr.

I remember being three or four years old, standing at the kitchen table of our new home in Hanover, MA (we’d just moved there from Boston).  I remember the kitchen was filled with bright yellow light streaming through a large window over the sink.

My mom was at the table, layering frosting on top of a huge chocolate cake.

“Wouldn’t you like a new name?” she asked out of the blue.

Her question confused me. I’d been staring at the cake, mesmerized.  Why would I need a new name?  Maybe I asked, “I already have one. Why should I change it?”

I couldn’t take my eyes off the cake.  I had the distinct feeling that my answer was somehow related to whether or not I would get a piece of cake now.

I thought about it for a minute.  What difference would it make?  What’s the big deal with changing names . . . as long as I’d have that slice of freshly-made, frosted cake.

I sold out my first name for a piece of chocolate cake.

I have one other vivid memory from that Hanover kitchen.  I was being held over the kitchen sink with the bright light washing the room in yellow.  My father was holding me under his arm while with the other hand he lifted a glass of beer to my lips.  I remember spitting it out, gagging while my father laughed.  I couldn’t have been more than three years old.

I remember thinking that I’d let him down by spitting out the beer, which I knew was very important to him.

I wanted to try again.  I must have said something like, “No, no don’t put me down.  I want to try again!”

The second time I managed to hold onto a big swallow, although the liquid seemed to be exploding in my mouth.  When I finally gulped down the bitter stuff, I was proud.  It was good to be a man, having a beer with my dad.

Then my mother walked in, and my dad caught hell.

My dad, Dominick Qualtiere, Sr., after a day of prospecting

For my mom it was the last straw in a barnfull of bad hay, and shortly afterward my father left for the hills of Utah to prospect for precious metals.  (He’d been a coal miner as a young man.)  I never saw him again, although we did exchange a series of letters and a few pictures over the years.  But I still I have that memory — the first beer of what has perhaps been too many beers in the course of a lifetime — I had my first beer with my dad.

Anyway, after that slice of chocolate cake, my first name was “Michael”.

Kathy and Mike as kids

I was Michael Qualtiere until my mother remarried.  My mom and her new husband decided that my sister Kathy and I should take “Dunford” as our last name.

I didn‘t like our new stepdad, Francis Dunford.  I missed my real father.

I remember I was in second grade, and my sister Kathy was in third grade, that day our new stepdad hit her.

Kathy and I were standing together, maybe sassing him back, when Francis Dunford’s hand snapped across her face.  It was a short, sharp little slap.

Sometimes you don’t know what you’re doing until it’s over.  It was as though someone had suddenly shoved me so hard from behind that I flew up at my stepfather — as if shot from a cannon, two small fists flailing.

He was falling back, so I was still up off my feet with my chest riding his, those little fists bouncing off his face.

He pushed me off and I landed on my feet glaring at him, a seven-year-old boy, fists clenched and eyes filled with tears of rage.

I don’t know what happened next.  The next thing I remember I was standing by my bedroom window, looking out on the upstate New York countryside that was now our backyard.

Looking back, I don’t hate my stepdad.  If anything, I feel sorry for him.  He didn’t know what he was getting into with those Qualtiere kids.

But then I began working as a bartender at The Cantina Italiana in Boston’s North End (that’s where I met Joey Cigars).  I was suddenly surrounded by the Italian culture.  There were guys at the bar named Dominick.  I loved the atmosphere, and felt vaguely connected to it.  After all, I was second-generation Italian, despite my English last name.

At the same time, I was beginning to get published.  Editors at the academic journal, Western American Literature, really liked my paper on Jack London and Nietzsche, and they were going to make it the lead article in that year’s biggest issue. I also had articles for Offshore Magazine, Hardcopy, and Restaurant Hospitality in the works.

So who was I?  As I began to get published, did I want the name “Dunford” or “Qualtiere” credited in the byline?

I decided to go back to my name at birth.  Unlike the incident at Ellis Island, or a decision made by my mom or stepdad — this was the first change to my name I actually made on my own.  Now it felt particularly good to see the name published in a magazine or journal.  I still go by “Mike” or “Michael” . . . but now it’s Michael Qualtiere again, or Mike Q.

(You can ignore this next part. I was trying to send my cousin, Rosemary, a family photo–see the comment from her husband Jerry Repash below. But my email wouldn’t accept such a large file … so I’m posting it here in case she wanted to look at or copy it. This is an old, old family photo of some of the Qualtieres. I’m at the bottom left, probably two years old, with my sister Kathy and our mom.)

9 Responses to HOW I GOT MY NAME