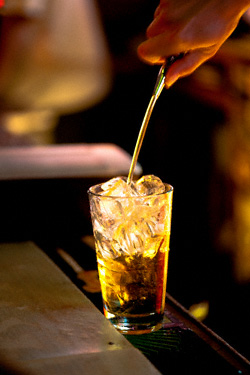 Ever wonder how professional bartenders easily free pour so accurately — one ounce, one and a half, or two ounces — all without using a shot glass or jigger?  How long does it take to master this skill?  Check out our video below and you’ll see it takes far less time than you’d think.

At Johnny D’s, Oscar is a kick-ass bartender . . . but because the club uses a measured pour, he never perfected doing it free-hand.

A couple of weeks ago I laid down a challenge.  I told Oscar that he could quickly develop this skill in less than ten minutes . . . and learn it so well that he’d immediately be able to train someone else.

Last week we actually tried it, and at the end of this introduction you can watch the video we made of our project.

You’ll see Oscar now free-pouring like a champ, and also training Brittany, a waitress at the club with no prior bartending experience.

The most common mistake when teaching this count is to put the “horse before the cart.”

I’ve seen bartenders make the trainee start pouring blind immediately.  The trainee pours blind into a tin cup, then empties it into a measuring glass to see how they did . . . short pour one time, then too much the next.

Then they try again.

It’s much faster to simply pour into a long row of shot glasses, over and over.  Just keep pouring into a shot glass while counting — until you have the exact count down like a musical beat.  Then measure how you do with a blind pour, using that learned count  . . .

Do bartenders spend their life counting . . . ?

While it’s useful to count at the beginning, just to establish the rhythm — once you have your exact count and you’ve been using it for a while — you won’t actually be counting at all.

To start, when practice is over and you’re actually working behind the bar, you’ll use a “silent count” — (as Brittany does at the 5 minute mark in the video.)  Very quickly that “silent count” will become a “muscle memory.”  Your wrist and arm will know the exact four-count just by the “feel” of the time your arm is raised.

First, I have to say that I’m not a great camera-man.

I also want to remind you (once more) that Oscar is teaching this lesson less than ten minutes after he’d learned the method himself.  (This is the way we planned it . . . we wanted to demonstrate how easily the skill can be both learned, and taught.)

I guess I’m pointing this out because there sure are some rough spots in the video.  There are things that we would have changed if we’d done it a second time.  (For example, towards the end of the video, Oscar is interrupted by a woman wanting to purchase a Johnny D’s T-shirt.)

And if we’d done it more than once, maybe we would have cut down on the beginning of the lesson, where Brittany is just learning the feel of the bottle.

But we had already decided . . . no editing, no corrections, just one chance.  So once the camera started rolling we were committed to “keep on trucking,” just to prove that learning how to “free-pour” is a ten-minute task.

So here it is . . . if you follow the method in this video, you’ll be free-pouring like a pro in no time at all.  (One suggestion:  Enlarge the video to “full screen” and you can better see how accurate Brittany becomes at pouring exact shots.)

Thanks to Johnny D’s and owner Carla DeLellis for the use of her facilities and staff.