WHEN SOME OF THE CUSTOMERS ARE GANGSTERS . . . 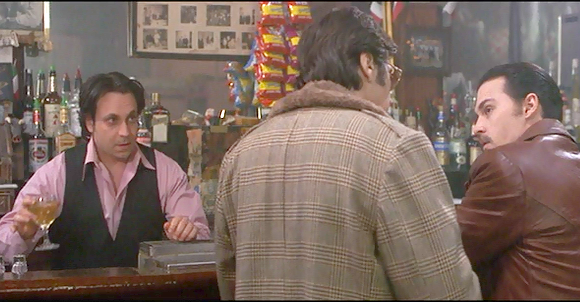 (Screen shot from “Donnie Brasco” — my choice for most realistic dialogue in any Mafia film.)

I’ve been lucky in this business.  I’ve always liked the places I worked . . . always thought highly of the regulars, the staff and the owners.

In part, that was simply good fortune — lucking out in getting into the right joints.  But also in part, I do take some credit.  If I didn’t like where I was working . . . I left.

There’s a few jobs not listed in “Places I’ve worked” — because I left so quickly I don’t count them.

This post is about one of those places . . . looking back, I was happy just to get out of there alive.  I mean that literally.

Seriously, I really should have known.  I’d met this North End restaurant owner while I was still working at The Cantina Italiana.  Tino was a regular at The Cantina’s bar and I’d often talk with him.

One night he was telling me about a guy who had slipped on the wet tiles in the men’s room at his place, and then decided to sue him.

“That fucking c*ck-sucker was trying to ruin me,” Tino was saying, “I couldn’t believe the balls on this guy!”

Tino went on about how their lawyers had exchanged angry letters, and about a trial date that had been set for several years down the road.  Then Tino stopped talking.

The guy did him a favor?  He died?

At the time I didn’t think too much about it . . . I was busy tending bar and Tino wasn’t the only customer.  I guess I wasn’t paying enough attention.

But as I continued to work in the North End, I began to catch onto the lingo.  It was slick, colorful, packed with nuance.  “He did me a favor and died,” . . . that was Tino’s way of saying he got rid of the guy.

All those guys really did act and talk like in the movies, but it was the movies that copied them.

Everyone in the North End was using the phrase “Fuhgeddaboutit” fifteen years before it showed up in the film, Donnie Brasco.  (Apparently the film’s director spent weeks in NYC’s Little Italy hanging out with the wise-guys in restaurants and coffee shops, trying to get their expressions and behavior down pat.)

Remember that gory scene in the movie, “Things to Do in Denver When You’re Dead” — where a guy dies slowly in the dumpster after being shot up the ass?  That was art imitating life.

A regular at the bar described that gangland-style punishment to me years before the movie was made.

When he saw the expression on my face, he quickly said something like:  “The guy will live, but he’ll walk around with a bag [colostomy bag] for the rest of his life.”

I know enough now to realize that the victim probably won’t live.  That regular– a connected guy — was just trying to make his lifestyle more palatable with the easily-shocked bartender from the outside world.

It’s like when they say, “I never hurt anybody who didn’t deserve it.”  These men live in the neighborhood, they have families, and kids who go to the local schools.  It’s somehow better (if anyone knows what they do), that what they do is almost a civic contribution . . . as in the guy deserved it.  A problem for the community has been eliminated.

It took me a while to catch onto these things . . . I almost didn’t smarten up soon enough.

One night Joey Cigars (who I also knew from The Cantina) was at Tino’s bar.  He and Tino were both drinking pretty heavily.

They continued to drink after I’d given last call, and the two of them sat there drinking after I locked the front door and began cashing out the register.

They started arguing about something and then Tino just waved his hand in the air, turned and started walking toward the back of the restaurant.  “You don’t walk out on me!” Joey said.  The words snapped like a whip.

But Tino just kept walking toward the kitchen.

Joey got up and followed him.

By the time I passed through the kitchen on the way to the office with the night’s cash drawer — they were in a major argument.  It had something to do with Tino not showing Joey Cigars enough respect.

“I’m just as big as you are now!” Tino was yelling directly in Joey’s face.

(That was the alcohol talking . . . because no way this was true, even I knew that.  Joey had served fifteen years in prison for his alleged involvement in the killings during the Mafia wars in Boston.  He might less active now, but Joey was a made guy . . . all the other wise-guys treated him with the up-most respect.)

By now they were both screaming drunk and red in the face.  Tino’s fists were clenched like he might take a swing at Joey.  They were moving, circling each other as they continued to shout at the top of their lungs.

“You’re making a fuckin’ mistake!” Joey shouted.  Joey had one hand in his pocket.  His hand kept moving slightly in that pocket.

They both looked half-crazy as they screamed at each other.  “I’ll fucking kill you,” Tino screamed.  Joey glared back, hand still in his pocket.  “Fuck you!” Joey yelled, “FUCK YOU . . . you’re DONE!  YOU’RE THOUGH!!”

I’d just walked from the quiet of the closed restaurant into a god-damn combat zone — they were both about ready to explode into violence.

Joey started to move that hand out of his pocket.

Everything flashed though my mind in a split-second . . . an entire movie clip of what was about to happen.  If Joey shot Tino . . . I was a dead man.  No way he was going to leave a witness.

Joey liked me, or at least he didn’t dislike me . . . which was pretty close to a “like” for Joey.  There had been an incident at The Cantina where I’d butted heads with some people maybe I shouldn’t have . . . but in his own way, Joey respected that.  He’d taken care of what might have been serious fall-out.

After that, Joey and I always got along . . . but no way he’d leave a witness if he shot Tino now.

I was panicked.  They were still circling and shouting at each other, and I was just to one side, circling with them as they moved.

If Joey shot Tino I was dead.  If Tino killed Joey, the wise-guys would probably kill both of us just because I was there.

I put a hand on Joey’s shoulder for a second, not really pushing him back but just trying to keep some distance between the two of them.  He glared at me as though he might shoot me first.  He was mad beyond all reason.

Looking back now, what I really should have done was just tackle Tino and take him down to the kitchen floor . . . and hope that Joey didn’t just start shooting at us both.

But I wasn’t thinking clearly . . . everything had just exploded into this yelling and circling, and there was a killer instinct from both of them you could actually smell.

Somehow my screaming at them (like the panicked bystander I was) began to slow things down.  They were still yelling back and forth, but now they didn’t seem to mean it so much.  Now they were merely holding their own ground, unwilling to budge, but no longer on the verge of killing each other.

Joey still had his hand in that pocket, but his arm wasn’t as tensed, as though he were about to bring out a weapon.

Joey turned and started to storm out of the kitchen, but then he stopped and spun back.
“You’re dead!” he glared at Tino, “You hear me?  You’re dead . . . DEAD!”

As Joey left, I saw fear cross Tino’s face for the first time . . . although he continued to bluster.

My shirt was sticking to my back.  Now that it was over I could feel the acid rush of adrenaline screaming through my body.

Tino continued to talk trash as we locked up the restaurant, but he couldn’t hide the worry on his face.

On the way to the subway station, I stopped at The Bell in Hand Tavern for a shot and a beer, and ended up staying until they closed.

Joey and Tino apparently sat down with the bosses the next day.  Joey was still furious, but the bosses wanted a peaceful resolution.

I heard all this from a few people at the bar.  Quite a while later I heard that Tino would sneak back on weekends sometimes to visit his parents.  The bosses all knew about it, I was told . . . but they let it slide.  They’d made their point.  Tino spent the following year living in rural Maine.

The day after that alleged sit-down meeting, Tino’s brother took over the running of the restaurant.

11 Responses to WHEN SOME OF THE CUSTOMERS ARE GANGSTERS . . .