JAW-DROPPER AT THE SYMPHONY 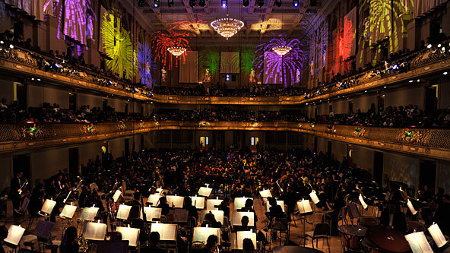 The NBA finals are going on right now, and our Boston Celtics aren’t in it.  The Miami Heat beat them in last week’s heart-breaking conference championships.  But today I choose to think about happier times, looking back to when the Celtics won it all in 2008.

That was about the best three-day weekend I’ve had.

Of course, it actually began on a Tuesday.  At the time I worked Friday-Saturday-Sunday-Monday, so my “weekend” started at the beginning of the week.  But this was the craziest, non-stop “ThankGoodnessIt’s ____,” — no matter what day it fell on.

First there was a breath-taking view of the Boston skyline, then a long-awaited Celtic championship.  There was a victory parade to celebrate their win, leading to a great night out on the town, . . . until finally it ended with one of the funniest/most bizarre things I’ve seen.  It  ended with my best friend, Colleen, interrupting a concert of the Boston Pops Orchestra at Symphony Hall.

In those days whenever Colleen came to Boston to visit, I’d get her a nice little bed-and-breakfast apartment.  But when I called the B&B agency this time, none of the inexpensive rentals were available.  “Let me see what I can do,” the lady on the phone said.  By now we’d given her enough business that she was going to help us out.

She called me back half an hour later. 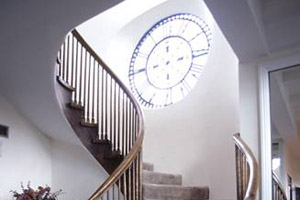 “The ones you normally book are all taken,” she said, “But I do have a luxury suite that happens to be open.  I’ll let you have it for your usual price.”

She sent me the link.

This was the suite that Colleen had always teased me about.  It was a penthouse apartment so swank I couldn’t come close to affording it.  It had a winding staircase leading up to three bedrooms.  There were three full-sized private bathrooms.  The back end of the living room was a wall-to-wall window offering a spectacular view of downtown Boston.  It had a formal dining table with seating for six.  It was ridiculous. 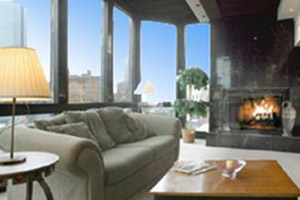 “If anyone calls to rent it, you’ll have to give it up,” the lady told me, “But for now you can have it for what you pay for the smaller units.”

The “Presidential Suite” for three days –and I was getting it for a song.  Colleen thought I was being cute when I said that’s where she’d be staying.

Colleen arrived in Boston early Tuesday afternoon, and I figured we’d go someplace nice for dinner . . . but she wouldn’t hear of it.  “I don’t want you spending all your money,” she said.  She insisted that she should make us dinner at the penthouse — there was a complete kitchen with a full-size stove and refrigerator, a microwave and a toaster oven, coffee-maker, pots and pans, plates and bowls, fancy silverware.  “What would you like me to cook?” she asked.

“How about shrimp scampi?” I said, trying to be a wise-ass.  The kitchen had all the amenities, but no food was stocked. 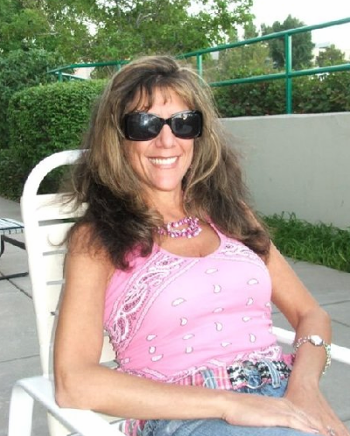 Colleen (ready to “bop around town.”)

“I’ll need some shrimp, a clove of garlic, linguine, olive oil, butter, and a lemon,” she said without blinking.  “There’s salt and pepper here, but maybe you’d like a little parmesan cheese.”

“Pick up a baguette and I’ll make garlic bread to go with it,” she said.

I had to pick up beer anyway, along with vodka and pineapple juice.  (Colleen wanted a pineapple martini.)  I walked half a block to an upscale Back Bay delicatessen, and bought everything she needed.  Colleen is a great cook, and she threw together a dynamite shrimp scampi as effortlessly as someone might flip through their mail standing at the mailbox.  It was so good.

After dinner we hopped on the trolley to head for the game.  I didn’t have tickets, so we went to Boston’s Quincy Market and joined the crowd watching large screen TVs in one of the nightspots.

What a game!  I suppose a true basketball fan might have preferred a closer score, but it had been twenty-two years since the Celtics won the overall title, and with each point they piled up now the roar from the crowd rattled the pints of beer on the bar.  It was madness as the final seconds were counted down. 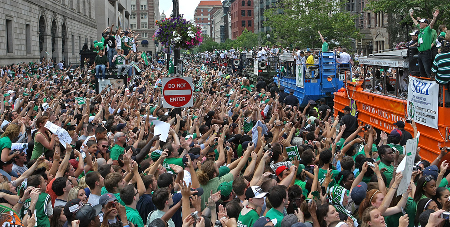 The day of the victory parade was just like a holiday.  Whenever a Boston team wins a title, the city has a “rolling” celebration.  They use Duck Boats to carry the team’s players through the downtown streets, then the amphibious vehicles slip into the Charles River for a ride past the cheering crowds lining the shore, and then back up onto the streets again to finish the parade. 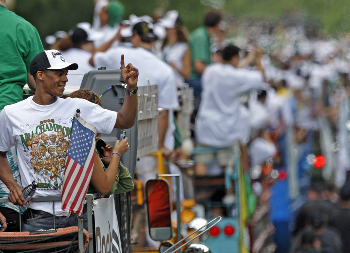 Our lucky penthouse suite had a fantastic view, but we wanted to watch the parade among the crowd.  We went downstairs early and found a spot in the front row, leaning over the ropes.  I almost could have reached out and shaken Rajon Rondo’s hand.  (I remember thinking he looked so young, . . . almost like a high school kid.)

There’s a lot I have to skip here, or I’ll be writing all day.  There was “the meatball story,” which had to do with some take-out food back at the penthouse, and what I’d done with it.  We argued for hours about that story’s merits — was a joke I pulled really funny, or not?  Then there was Colleen, asking the waiter where we had lunch the next day whether he thought it was funny.  But I protested his decision — all the time she was explaining, he kept staring at the logo on her snug Celtics T-shirt.  (When I bought it for her I didn’t realize the sizes ran small.)  Seriously, what kind of impartial judge could he be?

And there was “the scallops-wrapped-in-bacon” incident at the food pavilion in Boston’s Quincy Market — but these stories will have to wait for another time.

To cut to the chase . . . I never expected the Celtics to win in six games.  I thought the series would go to the seventh game, at which time I’d be back at work and Colleen would be home.  If I had known they were going to win Tuesday night, and therefore the parade would follow a day or two later, . . . I never would have bought us tickets to the Boston Pops Orchestra.  But after the parade, and walking a bit on The Freedom Trail, then stopping at P. F. Chang’s for lunch — that night we were off to Symphony Hall. 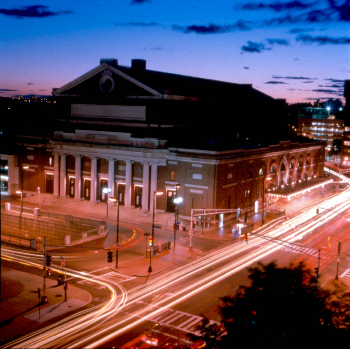 We stopped at the bar on the first floor of Symphony Hall.  I got Colleen a pineapple martini and myself a beer, and we were sitting at a small table when out of the corner of my eye, I saw a guy approaching us fast.  I was just about to jump up and defend us, when the guy reached out his hand with a big smile.

It was Gilberto Rivera, the singer and leader of the band Rumba Na Ma.  Back then Rumba Na Ma played every Sunday for Johnny D’s salsa night.

“What are you doing here?” I asked Gilberto after standing to introduce him to Colleen.  “Oh, I’m getting some type of award,” he laughed, and I wasn’t sure whether or not to take him seriously.

For that night’s concert, one of the features was the semi-finals of a high-school talent contest that the Boston Pops was sponsoring.  There was some unbelievable talent showcased.  I couldn’t believe these were high school kids.

Anyway, after the four semi-finalists had performed, Keith Lockhart (the conductor of the BSO) stopped the show to present a Fidelity FutureStage Award.

And out walked Gilberto.  He’s a band leader at night, but during the day he teaches music in the public schools. 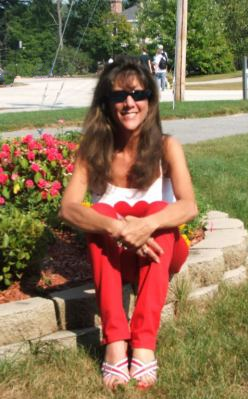 Colleen at home (in a quiet moment.)

Gilberto was laughing and smiling, waving to the audience as he accepted the award (he is a bit of a hot shit on stage.)  The award included a $25,000 grant for musical equipment in his school.

As he walked off the stage, Colleen said, “He plays at your club every Sunday?”

“Yea,” I told her, “Funny we happened to be here tonight.  It’s been a weird three days, hasn’t it?”

Little did I know it wasn’t over yet.

There was also a guest conductor for the BSO that night, and Keith Lockhart turned the stage over to him for part of the performance.  The guest conductor directed the orchestra through one piece, then he stopped to address the audience.

He said how pleased he was to be here, and that he knew all of Boston was in a great mood because of the Celtics long-awaited victory.

The audience applauded loudly for a minute or two, and when it quieted down, the guest conductor was ready to say something more, before returning to the concert.

He stood on stage with one hand raised, and his mouth open to speak.

I have no idea what he wanted to say because he never got the words out.

As he stood with finger raised and mouth opening, someone from the audience yelled, “GO CELTICS!”

It was loud and ballsy, and it rang out now through the quiet auditorium.

It was Colleen, sitting next to me.

I sat there not quite believing it. The entire place had been quiet as a church, and in that split second before the guest conductor spoke again, she had yelled . . . “GO CELTICS!”

The guest conductor looked up to roughly where we were sitting.  A lot of heads in the audience had turned our way.  (In the picture below, we would have been sitting in the top left balcony, beneath where the first purple banner is hanging.) 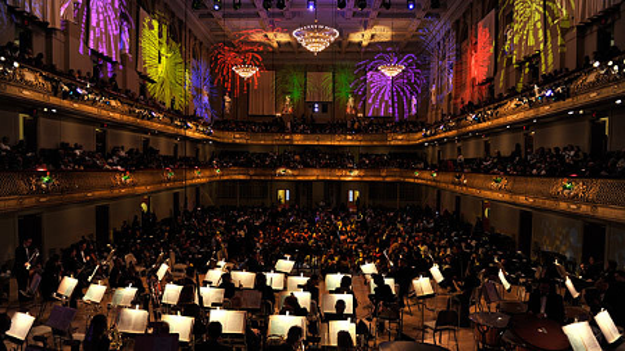 The guest conductor kept looking up, his eyes searching.  “I’m sorry,” he said, “I didn’t quite hear that.  Did someone say something?”

“GO CELTICS!” Colleen yelled again.  Now the audience responded with spontaneous laughter and applause.  Everyone was looking our way, and Colleen sank down in her seat, trying to hide.

“Well, . . . yes, I already said that,” the guest conductor smiled.  Then he introduced the next piece, turned to raise his baton, and the orchestra began to play.

Colleen . . . interrupting a concert at the Boston Symphony, and receiving a round of applause. There’s no one quite like her.

Anyway, that was about the best three days off I’d had in a long time.

Back next week with more Life on a Cocktail Napkin.

12 Responses to JAW-DROPPER AT THE SYMPHONY