LILLIAN, one of my worst shut-offs

(This note is from one night at Christopher’s, in Cambridge MA.) 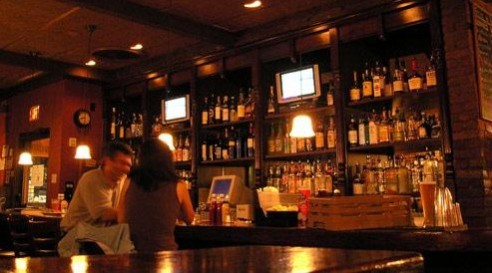 “I’ll have one more VO and ginger,” Lillian said. She had said the same thing before ordering each of her last four drinks.

I was behind the taps at Christopher’s Restaurant and Bar. Christopher’s is an upscale bistro known for its natural-foods menu, the quality selection of draft beers, the mixed yet decidedly college town clientele, and a relaxed low-key atmosphere. But the place still had it’s bar crowd, and I was responsible for making sure that everyone made it home safely.

“You still have half a drink in front of you, Lillian,” I said. “I’ll be back in a minute.”

I knew Lillian from the first bar I’d worked at in the Cambridge area, The Sunflower Café in Harvard Square. She had told me back then that she was a retired Navy officer. She said that she had once been second-in-command of a cruiser or destroyer, something like that. She was a tall, regal woman in her late fifties, with solid grey hair pulled back in a tight bun. She had a stiff-upper-lip sort of presence that made her story about being a Navy officer seem possible.

But she drank alone, and she drank too much, even back at The Sunflower.

Now she was sitting alone in Christopher’s and I didn’t want to serve her another. I kept busy, hoping she might decide to leave on her own.

“I’ll have one more VO and ginger,” she said when I happened to pass by a few minutes later. She said it as though we hadn’t just spoken.

“I’ll be right back,” I said, before rushing away to fill the wait staff order. By now, Lillian’s glass was empty.

“Just one more,” Lillian said smiling, when I felt obligated to go down to her end again. She gestured to the empty glass.

“I’ll be honest with you, Lillian, I think I’m going to hold off on that drink. I want to make sure you get home OK.”

“I’m fine,” she laughed. She was speaking clearly but her smile was a little off, somehow strange. “I live nearby,” she said, “And I’m walking.”

“I know, Lillian, but I don’t want to see you leave here and then have something happen. I don’t want you to try to cross the street, or twist your ankle on a crack in the sidewalk, and then I’ll feel terrible.”

“Just one more,” she pleaded.

“No, Lillian, you’ve never been a problem and you’re not being a problem now. You’ve always been nothing but a lady, and you still are. But I want to make sure you get home safely.”

When I walked by a few minutes later, she renewed her case for another drink. “One more,” she said. “I’ll have one more, and then I’ll go home.”

At first she glared at me as though I was a sailor under her command and when she told me something I had damn well better do it.

“That’s it for tonight, Lillian. Come back tomorrow and I’ll buy you the first drink.”

She continued to stare at me, then her look softened and she smiled. “You don’t understand,” she said quietly.

“HE wants me to have a drink,” she said, gesturing to the empty stool beside her.

“GOD wants me to have another drink.”

I’m sure my head must have popped back a couple of inches on my shoulders. I was speechless.

“GOD wants me to have one more VO and ginger,” Lillian said. She motioned again to the empty stool, almost secretively, as though she didn’t want God to know we were talking about him.

“Listen, Lillian.” I reached out to put my hand on her hands, which were now clenched together on the bar top. “Lillian,” I said softly, “I’m going to call you a cab, I’m going to pay for the cab and the tip . . . but when that cab comes, I need to you get in it and go home.”

Her eyes began to water and she was shaking a little as I kept my hand on hers.

“You’re a great lady, Lillian,” I told her. “I’ve always admired what you’ve accomplished in your life.”

1 Response to LILLIAN, one of my worst shut-offs