WHICH IS MORE FUN … office work, or bartending? 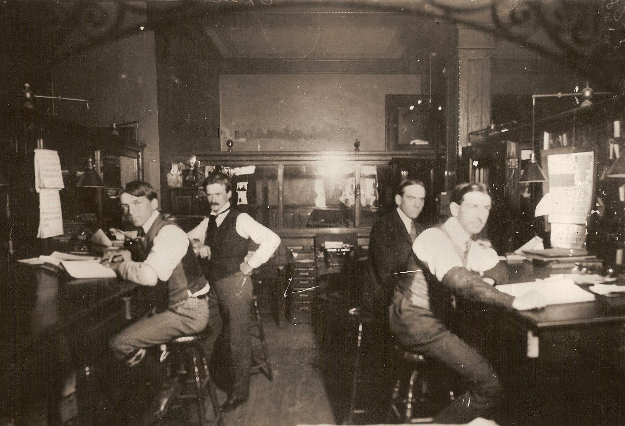 What would you rather be doing, . . . sitting in an office, or tending bar?

August hasn’t been a good month so far.  In July, I was set to cut down to two shifts a week at the club . . . so I could spend more time working on the book.

First, one of our new bartenders showed up for work drunk . . . not just a little tipsy, but totally hammered.  Evidently there was an on-going problem that we (and perhaps he) didn’t know about yet.  He’s a great guy, a good bartender, but right now this just isn’t the best job for him.

Then a week later the other new guy came in for his shift.  After a few minutes, he said that he was going to the store for a pack of cigarettes.

We haven’t seen him since.

That was two weeks week ago.

He still hasn’t returned our phone calls.  (We just wanted to make sure he was OK.  I hope they’re both doing OK.  They really were good guys.)

I guess it’s just part of this business, but instead of cutting down lately I’ve been working extra shifts.

I can’t seem to win.

And now the annual Workman’s Compensation Audit is waiting on my desk, and the Fair Share Contribution filing for Massachusetts is coming up.  More office work at a time when I can’t seem to keep my head above water.

I suppose you’re wondering . . . why is a bartender doing office work anyway?

It’s a long story, but here’s the short version.

At one point in my life, I thought I’d given up bartending.  I’d been a general manager at Friends & Company in Quincy Market, and was now the GM at The Cantina Italiana in Boston’s North End.

I was writing a regular column for Restaurant Hospitality, and on the basis of those articles was chosen as a featured speaker at the National Conference on Computer Technology in Food Service, sponsored by the National Restaurant Association.

These were opportunities that had just fallen into my lap.  I figured I should somehow follow up on them.

So I decided to become a consultant.  I thought maybe it was time to grow up.

First, I hated the “salesman” element of consulting.  I’d taken a consulting course, and that’s all the instructor talked about — the need to “sell” the owners, to subtly make them feel that they couldn’t do this without you.

I’m serious . . . that was the heart this instructor’s message, and I’ve heard it often enough in other places to know it’s a standard consultant’s approach.  Instill a sense of fear in your clients.  I can understand how this works, . . . but I just couldn’t see doing it.

I quickly became tired of trying to convince owners not to reinvent the wheel.

And to top it all off — with my client list building — I began to realize that if I was going to take this seriously, at some point I’d have to rent office space.  To be professional, I’d have to find official space, buy office furniture and equipment, hire a secretary.  (Up to this point I’d been working out of my apartment, letting clients leave messages on an answering machine.)

All these things were beginning to give me second thoughts, . . . then Johnny D’s called.  They wanted help putting in a new cash register system, and adding a restaurant to their nightclub.

When I walked into the club, briefcase in hand, I had no clue what was coming.

In the beginning, all I did at Johnny D’s was help them with the changes, work on choosing the equipment and setting up the kitchen.  After we hired a chef, I set up various back office functions like food inventories and sales analysis . . . that kind of thing.

After the restaurant’s grand opening, Tina DeLellis (the owner) and her daughter Carla talked me into taking a management contract — to continue work in the office.

The new operation was quite successful, but the Johnny D’s bar staff had some weak spots.  Not all of them had the skills and experience to handle the dramatic increase in business.  There would be lines of people waiting to get in . . .  and inside, the rows of people crowding the bar were sometimes unable to get their drinks quickly.

Tina was a great bartender — she’d been doing this all her life — and she’d jump behind the bar to help out when it got busy.

After a couple of hours, Tina came down to the office.  She flopped into a chair at the second desk.

“I’m exhausted,” she said (in retrospect I think she might have been faking it.)  “I’m exhausted,” Tina said, “ . . . Do you think you could go upstairs for a while and help them out?”

I’d never been behind the bar at Johnny D’s.  I had no idea where anything was.  I didn’t know the prices, what the procedures were . . . anything.  The only thing I knew was how to operate the cash registers, which I’d helped them put in.

But when you’ve been doing this a while, it’s like riding a bicycle.

Within a few minutes I was keeping up, and by the end of the night I have to say I was kicking ass.

But what really struck me was the difference just being upstairs.

I’d just come from the office, where I’d been meeting with guys like Mr. Joli.  (He was my first Workman’s Comp auditor — back then they actually sent someone to the location to do an in-person audit.)

Mr. Joli (I kept thinking “Mr. Jolly!  Mr. Jolly!”) was Indian, or Pakistani.  He was in his late forties, a short pudgy man.  He had the most sour, scowling face, with his lips seemingly locked in permanent downward grimace.  He snapped out everything he said, with that thick Indian accent. 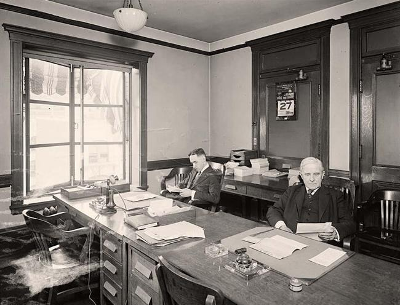 I couldn’t drag the folders out of the cabinet fast enough for him.  Nothing would make this man happy.

And his name was, Mr. Joli.

Now, instead of being cooped up with Mr. Joli, . . . I was upstairs, behind the bar in a rocking nightclub.  It was a different world.

The band was playing.

Everyone around me — in front and in back, and on either side — three hundred people were packed into the place, and they were all laughing and having a great time.  It was like leaving the office and stepping into the middle of a carnival.

Imagine if you’d retired from a sport that you absolutely loved, and suddenly you had the chance to play again.  I swear, when my feet first hit the bar mats, it was like stepping onto the home-town turf for the big game. 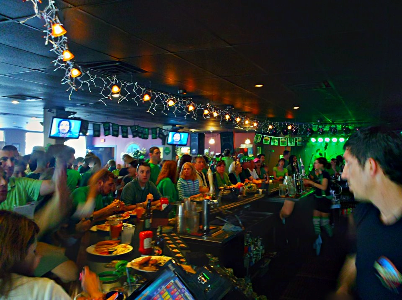 Just as I was thinking this, an attractive young lady smiled at me as I handed her back her change.

“How in the world am I going to go back to that office?” I thought as the smiling young lady walked away.

At the end of the shift, Tina came over to me.

“Why don’t you work one night a week on the bar,” she suggested.  “I can use the help.”

After a couple of weeks, she talked me into taking another shift.  “Just work Friday and Saturday,” she suggested, “Those are the best two nights.”

A month later, Tina wanted me to take another shift.  “You’re working the two best shifts as it is now,” she said, “Don’t you think it would be fair for you to work one of the slower shifts too?  All the other bartenders have to.”

Then the next month she wanted me to work a day shift, because now I was working three nights and all of the other bartenders had to work at least one day shift.  “It only seems fair,” she said.

I’d been sitting there with the other bartenders, counting tips and having a beer after work.  I still remember my response:

“First I did one shift, and then because it was a good shift, you thought I should pay for it by working two,” I told Tina.  “Then because I was working two shifts, you said it would only be fair for me to work a third one.”

I’d already had a couple of beers, along with everyone else.  They all laughed.

But I don’t think I was kidding.

It wasn’t long before I was working five shifts a week, and now when a new client called my apartment phone asking about consulting, I usually found a way to turn the job down.

I don’t have any regrets.  Working again as a bartender has given me the time to pursue other interests.  Having tried both ways, I’ve learned that some things are more important than “growing up.”

But right now I wish I could just cut down a little.  I really need work on that book.

I’m still a dreamer, aren’t I?

14 Responses to WHICH IS MORE FUN … office work, or bartending?