NAKED LADIES, and The Writing on the Wall 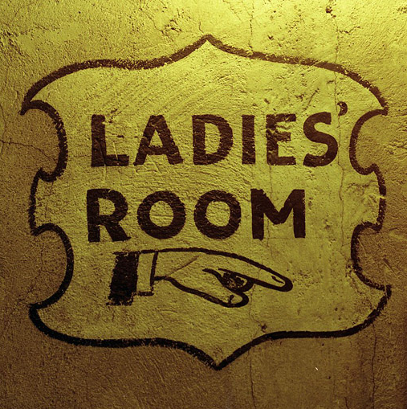 From the swankiest nightspot . . . to the seediest, run-down tavern in America, every restaurant or bar has rest rooms.

So it’s not surprising that most bartenders have at least one good tale about their establishment’s facilities.

I remember I was behind the taps at The Lark Tavern in Albany NY, and a disheveled-looking woman walked in asking to use the ladies room.  When she didn’t come out for a while and wouldn’t respond to our repeated knocks, we used our key to open the door.  She was standing at the sink counter, both faucets gushing full blast — she was stark naked.  With her raggedy clothes neatly folded on the tile floor, she was giving herself a sponge bath with her hands.

As we stood in the doorway — completely dumbfounded looking at her — the woman barely gave us a second glance.  She just kept splashing herself more frantically, as if realizing she had only a few seconds left to finish.

Years later at the Sunflower Café in Cambridge MA, the same thing happened and that‘s when I realized this was probably happening all across the country.  Wherever there’s a bar located near a large park or public transit station — anytime there are street-people around who don’t have a better option — you’ll find the occasional walk-ins who strip down and wash up in your rest rooms.

The au naturel woman taking a sponge bath at The Sunflower was actually the second half of my personal favorite bar/bathroom story.  That story began at The Huddle Tavern, in Cortland NY.

One afternoon, I happened to stop into The Huddle when the owner’s son, Al, was painting the ladies room.  At the time I was managing The Mug a little further down Main Street, so Al felt comfortable letting me sit at the bar by myself.  He served me a drink and went back to painting.

Now and then he’d pop his head out and give me another beer.  By this time he was splattered with paint.

“I don’t understand, Al,“ I said to him at one point, “Why are you repainting the ladies room?  You must have repainted it just last month.”

“Look at the booths.” I said, pointing to the corner booth with its broken back.  “Look at the carpet.”  I pointed to two large tears in the old carpet that was supposed to cover the cement floor.  “Why are you wasting your time on the ladies room?”

“I’ve got my reasons,” Al said, and he went back to painting.

When he was done, Al sat down to have a beer with me.

“Once, a girl wrote something good about me on the bathroom walls,” Al said, “And I got at lot of attention from the women who read it.”

“It worked so well,” he continued, “That now I always write something good about myself,  . . . every time I repaint.”  Al explained that after he applied the fresh paint, he’d wait until a few women had added their graffiti, then go in after hours and write a few lines about himself.

“Sometimes I’ll write, For a good time see Al the bartender,” he told me, “Other times I just write, “Al at the bar is a GREAT lay!”

“Works like a charm,” Al said, “It’s amazing.  You wouldn’t believe how well it works.”

That was in Cortland NY, and then I moved to Albany, and finally wound up in Cambridge MA.  Now I was working at The Sunflower Café, and a woman had just taken a sponge bath in the ladies room (just like the one at The Lark.)

We were all having drinks after work that night.  Everyone was still talking about the naked lady in the bathroom, so I told them the story about Al.  They all got a laugh, then we began talking about something else.

Maybe a week later there were two young girls at the bar, and I thought they were acting a little strange, but I wasn’t really worried about it.  They were just being kids, whispering and laughing behind their hands as they leaned close to talk.

Finally another women, probably in her early thirties, sat there grinning whenever she caught my eye.

It caught me by surprise, but I told her I was.

“Well,” she smiled, “There something very nice written about you on the ladies room wall.”

Now it made sense.  I sent one of the waitresses to check.

Someone had written — “For a good time, try Mike at the bar!” — in big, bold black letters with a Sharpe pen.  I figured it must have been one of the waitresses who had listened to the story about Al that night.  She must have wanted to know if it really worked, and used my name just to bust my balls.

Well, at least now I can personally confirm what Al was saying all along.  Discrete marketing graffiti definitely works.

I had planned to include a second bar/bathroom story, but now I can’t find the original source.  It was about was something I’d read in the newspaper on a slow day at The Lark Tavern — I think it was an Associated Press story.

I know I tore the article out, but now I can’t find that scrap of paper.  (I still have a few boxes of notes left to sort through.)

Here’s the story from memory.  It was a report about a bar fighting a law suit.

It seems that a local tavern in New Jersey had an interesting painting on the ladies room wall.  The bar was located near a major highway, and although the clientele was predominately from the neighborhood, the regulars were often interrupted (and irritated) by passers-by stopping in.

Someone in the bar came up with the idea of getting even.  They had a local artist paint a realistic, full-sized portrait of Adonis on the ladies room wall.  Covering the portrait’s X-rated groin was a thin wooden fig leaf.

Unknown to any of the rest room visitors, the fig leaf was wired to a light bulb above the bar — if anyone lifted the leaf, the light bulb would flash on, and stay on until the leaf was lowered.

I’m sure many female customers wondered what was going on when they stepped out of the rest room, and were greeted by applause and cheering.

Apparently, one litigation-minded couple decided not to accept this lying down.  They took the bar to court, and won.  The portrait with its fig leaf had to come down, and the suing couple was awarded something like $40,000 in damages.

I know I tore the article out because I remember wondering if anyone would want that missing page — but as I said, I can’t find it now.

If anyone reading here knows of this story and can point to the original source, please use the “Contact us” link to email me.  The only thing I could find on the web was a joke that was apparently inspired by the incident.

Anyway, here’s a video of the funniest bathroom prank I’ve seen in a while.  Back next week with more Life on a Cocktail Napkin.

14 Responses to NAKED LADIES, and The Writing on the Wall