SECOND CHANCES IN A BAR 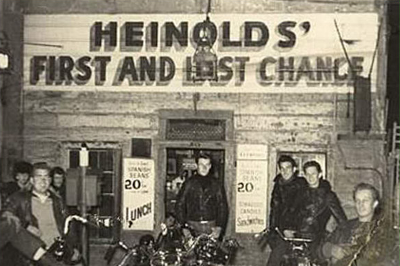 It’s a bar room tradition with  a long history.  It’s such a part of this business that some establishments include a reference in their name — The Last Chance Saloon, Second Chance Bar, and Heinold’s First and Last Chance (still serving drinks in Oakland, CA.)  If you want an opportunity to do things over, perhaps to be forgiven, you can always count on your local tavern. 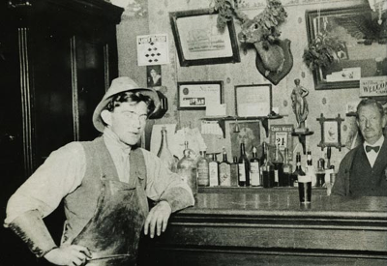 Jack London at the bar in Heinold’s joint.

I remember The Lark Tavern (Albany NY), where a guy named Whitey was a nightly customer.  Whitey worked as a roofer on the tops of buildings that you could fry an egg on — and afterwards he’d stop in for a cold beer and air conditioning.  At six feet tall with a head of prematurely grey hair, he was as thin as a rail from toiling under the hot sun.

Whitey was a good guy, the kind of customer who would watch your back when things got rough, and the rest of the time just bust your balls and keep you laughing.  Whitey had the same girlfriend for as long as I’d known him — they were both divorced, but now they’d settled into a something like a permanent relationship.

Most of the time Whitey hung out at the bar with the other regulars, but once or twice a week Darlene would join him.

One night they seemed to be arguing.  They weren’t loud or obvious about it, but you could tell by their expressions and their short gestures that something wasn’t right.

I walked by at one point and happened to overhear part of their conversation.

“You’re such a fucking slut,” Whitey was saying under his breath, with uncharacteristic venom, “You’ve sucked more cock than I saw in the Army!”

I’m sure my head must have popped back a little on my shoulders.  It took a split second to recover and act like I didn’t hear a thing.  Sometimes people expect privacy in a bar.  Even though they’re just an arm’s length away and we hear everything, there are times we’re supposed to be simply part of the fixtures . . . the invisible man, or woman.

Now that I knew for sure they were having an argument, I avoided them.  This was totally unlike them, and I didn’t want to see or overhear anything that would make them uncomfortable later.

Their spat escalated, but just as I thought I should intervene — maybe say something like “Hey, do you know that your voices are starting to carry here?” — the two of them abruptly got up and left.

I have no idea what was going on with Whitey and Darlene.  Maybe she’d cheated on Whitey and now they were hashing it out in their own way.  Maybe they had an abusive relationship, although I’d never suspected that before.  I hated to think it was true, but this wasn’t a good sign.  When Darlene walked out with Whitey — or rather, walked out a couple of feet behind him — she had the look of someone who was totally guilty.  Or maybe it was the look of a beaten dog . . . or both.

I wondered what would happen the next time Whitey came in, with or without Darlene.

I didn’t have to wait long.  The next night they were back in the bar again — but now it was as though the previous incident had never happened.  They sat at the bar talking and laughing as though last night had been long, long forgotten.  As though there was no “last night,” . . . as if it had been edited out of their lives.

I never saw anything like that between them again.  Whether he deserved it or not, Whitey got his “mulligan.” 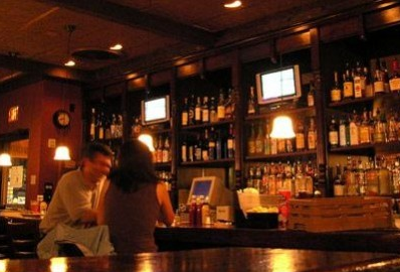 I’ve witnessed a lot of people getting second chances in a bar, and I’ve been lucky a few times in that regard myself.  I’ve done some pretty dumb things while drinking.  (Let’s say I was younger then, and still finding my way).

But I don’t think I ever embarrassed myself as badly as that one night in Christopher’s.

I had just broken up with my girlfriend — we’d been living together for over a year, and the last three months had been a living hell.  Now on my own again, I should have realized I might be tempted to go overboard.

I started the day at a few of the bars in Boston’s Quincy Market.  It was mid-afternoon.  This was the first time in over a year that I felt “single” again, and I was having a blast.  By nine o’clock at night I was trashed.

I realized I hadn’t eaten all day so I took a short walk to the North End,  and ordered linguine and clam sauce, to go.  (It wouldn’t have bothered me to sit there and eat alone, but being trashed I didn’t want to embarrass myself as the “drunk late-arrival.”)

That didn’t stop me from having a glass of wine at the bar while I waited.  The kitchen was slow, so I had another glass.

My dinner finally came out in a tin container, wrapped in a plastic bag.  I was headed home now, and it should have been simple.  All I had to do was get off at the Harvard Square Station on the Red Line, and walk the two blocks home.

I missed my stop, and ended up in Porter Square.

As I was standing in the Porter Square station waiting for the next train back, I thought, “Christopher’s is in Porter Square, . . . why don’t I stop in for one last drink?”

I’d been drinking beer all day, had some wine in the North End, but now as I sat at the bar I felt like a gin and tonic.  I like Bombay Sapphire for martinis, but for some reason I like Tanqueray for gin and tonics . . . and Christopher’s has Tanqueray Ten.

After a couple of those, I decided to try one of the craft beers Christopher’s has on tap.  They have a fine selection.  I had a really tasty pint of Porter, then switched to a glass of hoppy IPA.  Then there was a nicely-balanced Amber combining just the right amounts of hops and rich malt.

As I finished that pint, I realized it had been a long time since I’d enjoyed a Guinness Stout.

By now it was midnight, and suddenly I was starving again.  I still hadn’t eaten.  The bartender had cleared all the set-ups from the bar rail — Christopher’s was done serving food for the night.  But I was so hungry now.

The rest is vague — only bits and pieces of it came back to me the next day when I woke up.  Waking with a horrible hang-over, I also had the nagging fear that I’d done something really stupid while drinking.

I had this fuzzy recollection of sitting in Christopher’s, opening the plastic bag with my “to go” pasta inside.  In a series of single snapshots that were now flooding my mind, I had a single frame of me sitting there opening the container at the bar.

Then I vaguely remembered a moment where my head was low over the container — I knew this because I was looking directly across the top rim of the container at the bottles of liquor on the first shelf of the back bar.

With my face only an inch or so above the tin,  . . . I vaguely remembered that I was eating with my hands.

There was another snapshot of me with my face just an inch above the container — I was looking at the bar top around me.  The bar top was splattered with small bits of pasta and clam, and wet pools of sautéed garlic and oil were everywhere.  In that snapshot, I could see my hands stopped in mid-motion on their way to my mouth . . . each hand held a clump of linguine with clams.

Lying in bed remembering all this, I hoped it was it was only something I’d dreamt, a social-etiquette nightmare . . . but there was too much detail.

Now I vaguely remembered the greasy feel of my hands, and the slick oil around my mouth as I shoveled those clumps of pasta in, . . . and I remembered thinking about whether a shot of Patron tequila might not go really well with linguine and clam sauce.

I don’t know if the bartender served me the Patron or not.  I don’t remember how I got home.  I’m sure I must have taken a cab — maybe the bartender called one for me.

Anyone who has done something like this knows how it feels to recall only scattered details from the night before.  Christopher’s isn’t snobby, but it’s definitely an up-scale bar with an educated clientele.  And I used to work there!  Fortunately, I didn’t remember seeing anyone I knew that night, but I had still totally embarrassed myself.  My first thought was that I could never show my face in Christopher’s again.

Later in the day, I realized I had to face the music.  I was going to go back to Christopher’s and apologize to the bartender.

But he didn’t say or do anything.  He smiled, but it was a courteous, friendly smile.  He gave no indication that I had even been there the night before.

He tossed down a cocktail napkin.  He was treating me as he would treat any customer — no better, no worse.  I studied his face as I ordered my drink . . . nothing.

I guess it was like some gentleman’s agreement.  Whatever had happened the night before was now water-under-the-bridge.  I’d fucked up royally, but as a bartender he was overlooking it.

In the end, I never apologized or said anything about the linguine and clam sauce.  I was still pretty hung-over, although the gin and tonic helped.  After one drink, I paid my bill.

16 Responses to SECOND CHANCES IN A BAR