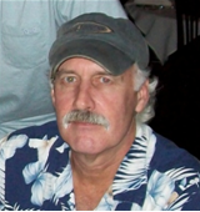 We’ll be back for our regular post tomorrow night, but for those of you who knew Mike Daley, either in person or from here, I have some sad news.  Mike has lost his long battle with cancer.  He was a good man, . . . a great customer, friend, and sometimes also a bartender as he traveled from Boston to Hawaii, finally finding a home in Key West, Fla.

His soul mate Sonnia Rice tells us that throughout the battle Mike never lost that remarkable sense of humor, and dignity.  No one was surprised.  (You can read her letter in the comment section.)

Mike would never have allowed me to become sentimental, so I’ll keep this short, adding only my favorite Zen Koan.  Like the man portrayed below, each of us will someday face the end of the run, . . . it’s what we take with us from the journey that counts.

A man walking across a field encounters a tiger.  He flees, the tiger chases after him.  Coming to a cliff, he grabs the root of a wild vine and swings himself over the edge.

Hanging on with the tiger growling above him, the man looks down to see another tiger waiting to eat him directly below.  Only the vine sustains him.

Two mice, one white and one black, start to gnaw on the vine.  Then the man spots a wild strawberry growing just within reach.  Holding on with one hand, he plucks the strawberry.  How sweet it tastes!