SHIT CUSTOMERS SAY (when they think we’re not listening) 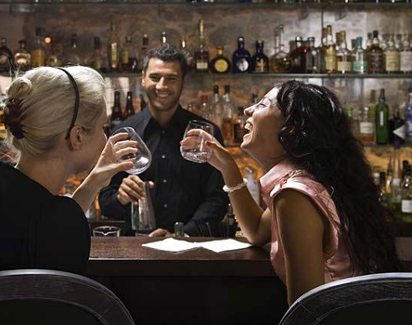 It always amazes me when customers carry on private conversations — when they discuss things they clearly don’t want overheard — while there’s a bartender working just two feet away.

They talk trash about their girlfriends or boyfriends, their bosses, even their own mothers.  They discuss the crimes they’ve pulled off, or new ones they’re plotting.  They plan to share these secrets only with the person sitting beside them although we’re standing right across from them both.

I’ve seen customers look to the left, then look to the right to make sure they aren’t being overheard . . . then tell someone the most personal things even as I reach out to pick up their glasses, or hand them their change.

Sometimes behind the bar, we’re like the invisible man (or woman.)

Often when you hear this stuff it’s hard not to laugh out loud.  Other times you want to reach over and slap them up the side of the head, . . . and sometimes it’s just like a 30-second novel, an epic story in a few dozen words.

Here are a few of my favorite things overheard while bartending:

(1) Two women in their late twenties were sitting at the bar talking; they were rough-looking gals who’d clearly been around the block a few times.  One of them said to the other, “He’s a great guy, but my God, he has the worst-tasting pee . . . !”

(2)  An older, connected-looking guy (thick gold chains hanging from his neck and a gaudy pinky ring his little finger) was talking with a body-guard-looking type.  The “body-guard” listened attentively to everything the old-timer said.  The old guy sipped his brandy as he spoke in low tones:  “The guy’s real good . . . he did a lot of work for us when I was in the can.  I want you to get hold of him Monday . . . he’ll end this shit.  You know what I mean.”

(3) A middle-aged man and his girlfriend were regulars at this bar in upstate New York.  They always got along well, but one day they seemed to be arguing.  As I walked by, I happened to overhear him tell her, “You’re such a fucking slut . . . you’ve suck more cock than I saw in the Army!”

(4) Two guys in their mid-twenties were talking about the business one of them had gone into recently, something that involved medical equipment and services.  “There’s a lot of money to be made from them,” the young man said to his friend, “They’re helpless, pathetic . . . sooner or later they’re going to need everything.”

He was talking about “the boomers.”  People in their sixties.

“It’s only going to go one direction for them,” the young man continued, “You’ll be able to charge them anything you want.”

(5)  Maybe I like this next favorite because it’s so recent — just happened the other night.  It’s not from the bar, but from the door at the club — but I want to include it anyway.

At Johnny D’s when there’s a big show and a line down the street, obviously the people waiting to pay are let into the club first.  But if there’s room, people can say they’re just here for a drink, and then hang out on the bar side to enjoy what’s happening.

On this particular night, a few casual customers were being allowed into the bar side.

Joe was on the door when a shaky-looking guy stood in front of him.  “I’m not here for the music,” the man said, “I just want to come in.  Let me in . . . I just got out of the half-way house and I really need a drink!”

(6)  There was a college professor who showed up now and then at an upstate New York bar where I was working.  He once told me he taught psychology.

Sometimes he’d sit with another man in his late forties, early fifties — who I assumed was also a professor from the college.  Other times he’d come in with one or two younger guys that I figured must be among his graduate students.

I was in my early twenties, and still pretty naive.

One night the professor walked in with a young man wearing a cowboy hat.  In his mid-twenties, this guy was speaking with an exaggerated western-movie accent — which with the hat made him stand out like a sore thumb in our bar — but he didn’t seem to mind.  I think if anything he was enjoying the attention, even if it was mostly in the form of quizzical stares.

All the other times the professor was at the bar with someone, they’d just sit there talking privately  But after a few drinks, this cowboy really began to ham it up.  Soon he was all over the place.

First he was dancing in the back room with just about everybody, including men — always a couple of feet away from his dancing partners, he was doing old sixties-type dance steps.  He stopped to talk with someone at the jukebox, then with a young couple seated at one of the tables.  The couple couldn’t stop laughing at his exaggerated antics.

I was working the service station, not three feet away from where the professor was sitting.  I couldn’t help overhear hear what he said when the cowboy came back for his drink.

The young man didn’t even bother to sit down.  He just stood at the bar and took a long swig of his cocktail.  He was about to head back into the crowd when the professor spoke.

“Why do you do this to me?” the professor asked.  His voice, which was normally deep and measured, now seemed to crack a little.  I glanced over, and his eyes were brimming.  He was on the verge of tears.

“Oh no, . . . don’t you start that here!” the young man snapped.  He laughed, and after one more long gulp, he went back to the dance floor.

I tried to look busy, as though I was making drinks and hadn’t heard a thing — but out of the corner of my eye I saw the professor looking at me.

For whatever reason, I never saw the professor in there again.

(7)  Two striking young blonds were at the bar, dressed to kill.  They both had two- hundred-dollar haircuts, and sleek clothes to match.  One of them lifted her glass thoughtfully, tossed her hair to one side as she spoke to the other, “Well, he looked like he was established . . . but you never really know, do you?  I’m going to try to find out this weekend.”

(8) The next favorite isn’t really something overheard, but certain customers have said this from time to time . . .

A shady-looking guy walked into the bar where I worked.  He kept looking around as he sat down.  There was something strange about his eyes; they were flat, a little deadened.  “I haven’t been here in fifteen years,” he said, looking over his shoulder again.  “. . . I’ve been away.”  Judging by his behavior and what I now believed was a jail-house stare in his eyes, I figured he’d just gotten out of prison.

“I haven’t been here in . . . ten years,” another guy said one day at this same bar.  “I’ve been in . . . California.”  From the rest of his conversation, and his efforts to act like a tough guy, I figured he wanted me to think that he’d been in prison.  It was a tough bar.  He’d probably heard another customer say something like this, and he wanted to give the same impression.

(9)  Two men in business suits were sitting at the bar in a Quincy Market place.  One man said to the other, “The auditors are coming Monday . . . I think I’m fucked.”

(10)  A group of very attractive women in their early thirties were at the club on what was clearly a girl’s night out.  Each time I went down to serve them, they were talking about dogs — different kinds of dogs, which dogs they preferred, and why.

At one point they were looking over the club’s schedule, and one of them noticed that a band called The Love Dogs would be playing that weekend.  “Oh, THE LOVE DOGS!” she snorted, with a deep-throated, slightly raunchy laugh.  “I have to see THAT band!”  And they all laughed.

Another time when I came down to them, one of the girls was describing a dog.  “He’s such a beautiful animal,” she told the others, “. . . But he doesn’t know what to do.”  And they all laughed again.

This went on the entire time they were there, probably over the course of two hours.

When I recounted all this to a woman friend a few days later, she said they had probably noticed I was listening and decided to take me for a ride.

“I’ve done things like that myself,” she told me, “When I thought someone was listening to the conversation.”

I’m not really sure what was happening that night.  Maybe they were toying with me, or maybe they were just talking, oblivious to my presence.

Anyway, these are just a few of the things overheard.  A word to the wise . . . the bartender is there.  And we can hear you.