“Are you OK?” Colleen asks.

It’s Wednesday afternoon and I’m already five days late with this week’s post.  I have the time off today, but I don’t feel like writing.

“Are you sure you‘re OK?” Colleen asks.

My mood is definitely bah-humbug today.  On Christmas, everyone will be at Colleen’s house, and I’ll be heading to work.  Johnny D’s opens at 6 P.M. Christmas night.

But this year’s no different, I always work Christmas . . . so that‘s probably not what’s bothering me.

Maybe I’m discouraged because another year has come and gone — and the book I‘ve been working on still isn’t finished.  Where does the time go?  Right now I‘m having trouble just pulling together weekly posts.

Anyway, instead of writing this post I called my best friend, Colleen, and we talked for a while.  Then I began reading one of David Hayden’s blogs.  He has a network of blogs, all of them top-shelf, and he also wrote a great little book on how to make more money in foodservice.

Last week in “Tips on Improving your Tips”, David wrote about the “Grinch-like” actions of a Kansas City bar owner.  The owner of Jardine’s, a highly-respected jazz club, recently fired all fifteen of her employees.

It seems that three weeks before Christmas, the staff at Jardine’s came to work at their usual time . . . and found the doors locked.  The place was closed.  They’d all been fired. 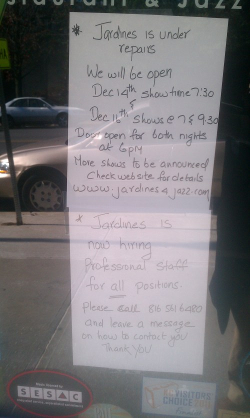 (Photo from "Tips for Improving your Tips".)

The sign on the front door said that the club would be closed while the place was remodeled and an entire new staff was hired from scratch.

(I’ve heard owners threaten this — “They’re not going to run ME . . . I’ll lock the doors and hire all new people!” — but this is the first time I’ve actually seen it done.)

Since the en mass-firing, there’s been plenty of mudslinging and finger-pointing from both Jardine’s ownership and the now-unemployed staff.

I’ve read that Jardine’s still owes some of these employees money — back tips that were never paid.  There was talk of verbal abuse and harassment, and one employee actually filed assault charges against the owner.  I read somewhere else that the whole thing started when some of the staff were caught drinking illegally after hours at the club.

But this “he said/she said” thing aside . . . what is not in dispute is the timing of the firing.

Given this business, we can assume that at least some of these employees were living paycheck to paycheck — and just before Christmas, all fifteen suddenly found themselves without jobs.

I can’t help but think of Tina DeLellis at Johnny D’s.  (Tina was the mom of current owner Carla DeLellis.)  Tina would never fire anyone during the Christmas holiday.

David and Carla with their mom, Tina DeLellis (Mrs. Johnny D). Photo from the LIVING/ARTS section of The Boston Globe, August 9,1991.

Tina demanded a lot from her staff — there was never any doubt about who was the boss — but she also treated everyone with respect.  She knew what it was like to struggle, to work hard just to get by.  She was quick to loan her staff money if someone came up short on rent at the end of the month, or was hit with sudden bills.

Maybe it was because Tina was born and raised in Naples, Italy and still had a lot of old-school ways about her — or maybe she just thought it was bad luck to fire someone around Christmas — but that was one of her unbending principles.  Everyone got at least one free pass during the holiday season.

I remember one year a prep cook was caught red-handed sneaking two bottles of beer out of the walk-in cooler downstairs.  The bartenders had noticed a bottle or two missing here and there, and now it was clear why.

The prep cook would snag a couple bottles, then go out to the back alley and chug down the beers before returning to work.

It wasn’t just the missing beers Tina was concerned about.  She didn’t want her kitchen staff working around hot stoves, handling sharp knives and even operating the slicing machine after they’d been drinking.

But it was the week before Christmas, . . . and she didn’t fire the guy.

“We’re going to talk about this after New Year’s,” Tina told him.  “For now, I need you to give me your word that this won’t happen again.”

“I need you to give me your word,” Tina said, “I can’t have you drinking on the job in my place.”

The guy finished out the holidays at Johnny D’s, then found another job, probably figuring he’d blown his chances here.

When he told Tina he was leaving, he thanked her, and kept repeating over and over how much he appreciated working for her.

Anyway, I want to finish this post with one further note on the Christmas spirit. 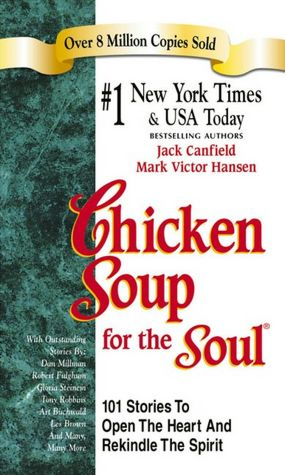 Although this isn’t technically a holiday story, I think the sentiment fits perfectly — this is from a book I found on top of the hamper in Colleen’s guest bathroom.  (I think she put it there as some sort of decoration . . . it’s a coffee-table book titled Chicken Soup for the Soul.)

One of the stories in it is from humorist Art Buchwald.

Later, when Art and his friend were walking down the sidewalk, the friend complimented some construction workers laboring at a site.

“What was that all about,” the author asked.

His friend told him that he was trying to bring some love back to New York City, one person at a time.

“[For example] I believe I have made that taxi driver‘s day.  Suppose he has twenty fares.  He‘s going to be nice to those twenty fares because someone was nice to him.  Those fares will in turn be kinder to their employees, shopkeepers or waiters, or even their own families.  Eventually, the goodwill could spread to at least a thousand people.  Now that isn‘t bad, is it?”

“You’re some kind of nut,“ Art Buchwald said, but the guy wasn’t discouraged.  He replied, “I’m hoping to enlist others in my campaign.”

“Yes, I know,” the friend replied, “And if she‘s a schoolteacher, her class is going to be in for a fantastic day.”

Here’s wishing that you and yours have a fantastic Christmas.

UPDATE 12/22 . . . David Hayden writes in the comment section below that he’s been contacted by several restaurant managers/owners who want to hire the fired Jardine’s employees.  Good news, just in time for Christmas . . . perfect.

14 Responses to THE CHRISTMAS SPIRIT