They hit the bars, the clubs, the nightspots — for most customers, each night out is a short vacation.  Everyone’s looking to relax and have a good time.

Some will get carried away, that’s to be expected.  Usually the only ones hurt or embarrassed are those individuals themselves.

It’s different with couples.  When they start crossing the line, couples are the worst.

I remember one couple at The Lark Tavern.  The guy was a big shot lawyer in a $500 suit.  He’d just purchased one of the large brownstone homes that surround Washington Park, and he’d show up during the week with his very attractive, somewhat younger wife.

This lawyer had a strong, positive bearing.  Big smile, big handshake, full of confidence.  He was always in a great mood, on top of the world, almost benevolent as he chatted with customers less fortunate than himself.

One night some construction workers were hanging out at The Lark, and the lawyer’s wife was paying a lot of attention to one of them.  The guy was a good looking young man, tan, well built.  As they talked, she laughed at something he said, touched his shoulder in a familiar way.

It was a little embarrassing to watch her flirt so openly.

The two of them became more intimate in their conversation.  They leaned close to whisper in each others’ ears, then laughed.

After a while the construction guy got up and threw on a leather jacket over the T-shirt he was wearing, and the wife picked up her purse.

As she walked out, the wife gave her husband a quick kiss on the cheek.  I think she whispered, “I’ll see you tomorrow.”

The lawyer sat alone now.  He ordered a scotch on the rocks, and another beer — quick nods between the bartenders signaled we’d better slow him down.

At one point, I walked by and he was apparently talking to himself, but he was speaking loudly enough for me to hear,  . . . so maybe he was talking to me.

It was a brave face, but I knew he was crushed.  This had happened in his neighborhood bar.

When he came in after that, he continued to flash those hundred dollar bills, and talk on and on about his wonderful townhouse — but the regulars had this little smile on their face as they listened now.

And we never saw his wife again.

A woman goes to the ladies room,  . . . and her husband immediately starts pawing the cute waitress.  The man leaves for a few minutes, and his woman makes it clear to the bartender that she’s available, that she’s really not interested in the guy — what makes people do this?

One night at Johnny D’s — this has to be ten years ago now — there was a couple down in John Bonaccorso’s section.

As soon as the couple took their seats, the girl was all over John . . .with her boyfriend sitting right next to her. 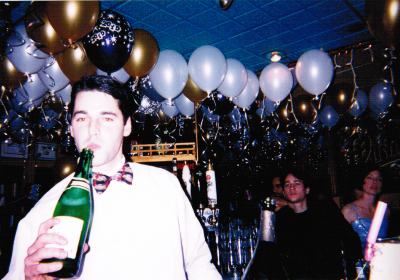 John Bonaccorso on his first New Year's Eve as a bartender.

I have to admit John is a good-looking guy, and when he was in his early twenties he was a real Tom-Cruise kind of bartender.

But as long as I’ve known him, John’s always had a steady girlfriend, and I’ve heard him say that time and again when women begin to seriously come on to him.  “Got a girlfriend,” he’ll say, and that’s what he told this one.

But she wouldn’t let up.

An hour or so later, the boyfriend went to the restroom.  As soon as he turned the corner, the girl leaned forward.  She actually stood up on the rungs of her bar stool and leaned over the bar to go talk with John.

“Look, I’m available,” she told him, “I’ve just been waiting for a good reason to dump this guy.”

“I’ve got a girlfriend,” John told her again.

When her boyfriend came back, the girl didn’t waste any time.  She broke up with the guy right there at the bar . . . while they were still eating dinner.

The poor guy couldn’t finish his meal.  He got up and walked the length of the bar with his head drooped, his jacket half over his shoulders.

John said something to the girl, . . . that maybe she should at least walk out with him, or something like that . . . so she did get up to leave.  But she stopped first to write down her phone number and hand it to John.

Sometimes you have to shake your head in disbelief.

What’s surprising is that these incidents barely stand out during the course of the night.  There are a thousand other things happening . . . you observe for the moment, then your attention is yanked someplace else.

It’s only later, maybe at the end of the night when you’re having a drink, that you sit back and say . . . “Man, that was fucked-up.”

I remember an older couple from The Sunflower Café, in Harvard Square.  They were In their late forties, and they were usually as quiet as vacant stools.

But one night just as I came over to them, the man began bitching about his wife.  The two of them were sitting next to each other, facing straight ahead, but he started bad-mouthing her as though she wasn’t there.

“She didn’t want to go out tonight,” he told me with a sneer, “She never wants to go out.  If it was up to her, we’d sit at home every night.”

His  comments caught me off guard.  I’ll never understood why people need to get the bartender involved.

I made an effort to avoid them after that, but the man finally waved me down and asked for another drink.

“And would you like one as well?” I asked the woman. 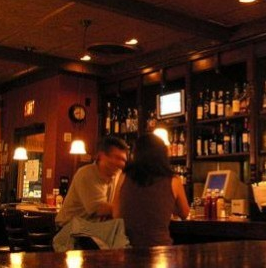 Why can't they all be like this couple at Christopher's Restaurant (Cambridge, MA.)

Ten minutes later the two of them were arguing.  They voices were low, but I could see him berating her under his breath.

“You’re just stupid!” I heard him say when I walked over to cut this short, “We can’t just go out and have a good time.  You always have to ruin things!”

From what I’d seen, the poor woman hadn’t said a word.  Now I was standing directly across from them.

But the entire time her face remained completely flat, emotionless . . . and she continued to take his abuse without reacting.

Was this how they lived their lives?

Maybe she’d learned to just ride this sort of thing out, and wait for the next day.  I wondered if tomorrow he’d apologize, or if they’d even talk about it.  Maybe he wouldn’t remember it at all.

Two weeks later that same couple was in The Sunflower again, and now they were simply the most content and happy pair.  Whenever I come over to them, they were chatting pleasantly with each other, and smiling as though the previous visit had never happened.

Anyway, that’s life behind the taps . . . and on the whole I can’t complain.  Fortunately the couples mentioned here are by far the exception.   Back next week with something more upbeat.