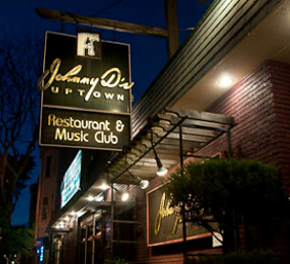 Friday will be our new day for updates, but here in the second week of that schedule, I’ve already fallen behind.  I’ve got nothing ready, and there’s only an hour left before work.

So, for this week’s post I’m putting up two short videos from Johnny D’s.

The first is of Booty Vortex playing at the club, recorded by our good friend, Mojo.  I think this vid gives a feel for what the place is like on a busy night.

When reading a post about a single incident — or one specific person — it might not clear that there were probably a thousand other things happening at the same time.  Many of the stories here had something like this going on in the background.  (There’s some footage from behind the bar about three-quarters through the video.)

The second video is also from Mojo — Brian Templeton and The Radio Kings rocking out at the club.

We’re prohibited from recording the national acts that perform at Johnny D’s — acts like Alison Krauss, The Motels, or Dixie Chicks.  (Yup, Dixie Chicks used to play here every year, until they won their Grammy.)  But if you like the blues, I think you’re going to enjoy listening to Brian’s group — they’re one of Boston’s best.

Again, my apologies, but that’s it for this week.

If you came here in the mood for bar stories, I’d recommend glancing through the archives on the right for some old favorites you might have missed:  Joey Cigars, and the one-hundred-dollar bill, A Child’s Tricycle (and drinking to forget), or “Gringes” (Tom Grindle saves my ass)”.

Or check out one of my favorite fellow bloggers, like David Hayden of Restaurant Laughs, Patrick Mcguire of Server not Servant, Delia from Because we’re not all there, Nick’s Sock Puppet Army, or Scribbler50’s Behind the Stick.

I’ll be back next week with a brand new story from Life on a Cocktail Napkin. … and  it’ll be a good one, I promise.