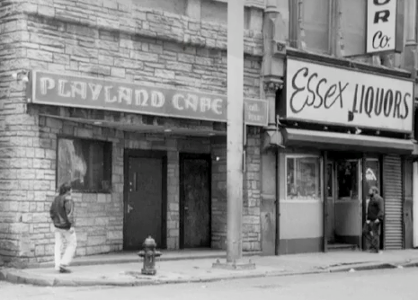 This post will be a quiet one . . . no bells and whistles, no big bang at the end.

Today we’ll look at a simple, thoughtful moment — and the lasting image of a veteran bartender doing something beyond what her job called for . . .

(I heard this story about The Playland Cafe second-hand from our good friend, Carrie.)

Carrie was in Johnny D’s last weekend and she was telling a group of us about an experience she’d had just after her college days.

We’ve known Carrie and her husband Joel for 15 years or more, back when they were both at MIT and first dating.  Carrie and Joel would show up at the club several times a week and the two of them were among our absolute favorite customers.

Joel helped me with my fraternity alumni website (Beta Phi Epsilon) ten years ago, and he helped me set up this blog.

They’re married now with two children, but neither of them has really changed.  (Except for Carrie’s fantastic new hair style — it rocks, Carrie!)

Anyway, Carrie was talking about when she used to bop around, looking for new things to do, new places to experience life.  One of her favorite choices was to head with her friends to an old piano bar in Boston’s Combat Zone (a two-block area where all the strip clubs were located.)

The Playland Cafe had a really seedy bar downstairs, but on the street level there was a somewhat-less-seedy lounge that was popular with local workers — bartenders, wait staff, dancers, and hookers taking a break from their street trade.  (Carrie described the upstairs as “overly fabulous” . . . but just to give you some idea, the joint was decorated with year-round Christmas lights.)

“Playland was turning into a transvestite hang-out,” Carrie explained, “Of course there was the gay bar below . . . but they had this wonderful piano bar upstairs and everyone would sing along.”

Apparently the old man tinkling the keys upstairs played every show tune in the book.  His music inspired loud, off-key sing-along chorusing and occasionally even drew a quiet tear from the motley crew huddled at the bar.

“You would look down the bar and most of the customers were old, kind of broken-down transvestites,” Carrie said.  “Tons of make-up, lots of gaudy jewelry and ill-fitting dresses that sparkled.”

“More than one of them would have their heads on the bar as the night went on.”

Carrie told about the night she took Joel to Playland with her, and how he embarrassed her by singing louder than anyone.  “I couldn’t get him to leave,” she laughed now, “We were there for over three hours, and Joel knew the words to every single song.”

One particular night, Carrie had stopped at Playland with some of her girl friends.

“Vivian was the bartender,” Carrie recalled, “I don’t think I was ever at that bar when Vivian wasn’t working.”

“She was an older woman, and so prim and proper looking.  Her hair was pulled back and her make-up was always perfect.  Her clothes were maybe a little out of date, but they were always pressed without the slightlest wrinkle . . . and she’d always wear these white blouses with a high white collar behind her neck.” 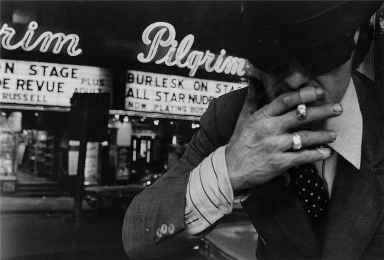 (Photo of the Combat Zone by Roswell Angier, Boston Phoenix.)

That particular night, Carrie’s friends happened to leave one by one until she found herself sitting at the bar alone.  Now she was surrounded by transvestites, tired-looking hookers and strippers, and a seedy collection of Combat Zone clientele.

“Vivian made sure I didn’t feel alone,” Carrie continued.  “She came over and talked with me every chance she got.  She was so charming and friendly in a polite sort of way . . . and then she became more open and confiding, like we’d known each other for years.  It was as though it was just her and I, and all the others around us were outsiders.”

(As Carrie continued with the story, I was liking Vivian more and more . . . it might be old-school, but as a bartender she had unfailing instincts.)

When Carrie was leaving, Vivian cautioned her to be careful on the street.  The Combat Zone was a tough area.  Aside from the hookers and drug dealers there were these shady, sometimes foul-smelling men lurking in every doorway and alley. 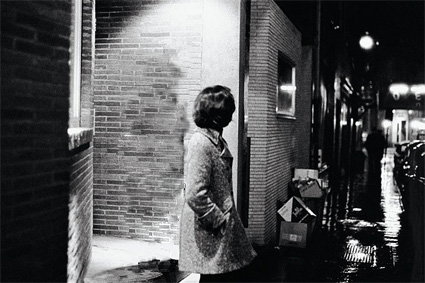 “You be careful,” Vivian told her.

Carrie drinks mostly club soda, so she wasn’t the least bit buzzed, but  it had to be intimidating to step out outside.

It was a dark street with unswept sidewalks and pools of water.  There were small clumps of debris that you carefully walked around.

And those dark figures lurked in the shadows.

Carrie tried to walk at a normal pace, not wanting to draw attention to herself . . . but as a young, college-aged girl she was clearly out of her element.

She heard a noise behind her!

At first she didn’t want to turn around.  What was that?

A few more steps, and she did turn around to see what might have just happened behind her back.  It sounded like the loud creaking of a door.

Carrie looked over her shoulder . . .  looked back down the street to the entrance of Playland . . . and she saw Vivian.

Vivian was standing there, leaning her head and shoulders around the half-open door.

She was just standing there, leaning around the side of the door, looking down to where Carrie now stood looking back at her.

She’d come out to watch Carrie walk down the street . . . to make sure that she made it safely to the end of the Combat Zone.

I had this wonderful image . . . the old woman bartender, with her unchanging prim look, that white collar . . . eyes darting protectively as her young customer navigated the short, dangerous walk away from her bar.

Carrie looked at her for a moment, and then gave a short wave, as if saying both, “See you next time,” and “Thanks for watching out for me.”

The Combat Zone is long gone now, and Playland along with it.  But as Carrie told this story I was thinking, “Damn, I wish I’d known Vivian.”  They really don’t make them like her anymore . . . and it’s a shame.

30 Responses to VIVIAN (an old-school barmaid)