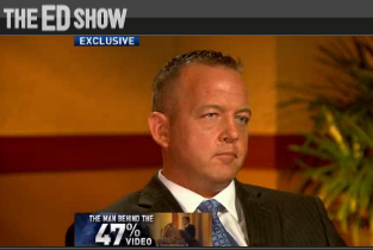 Last year on May 17th I went to work behind the bar — made the usual drinks, chatted with customers, earned some tips and went home satisfied that I’d done my job.  That same evening, another Boston-born bartender had a somewhat more productive shift.

The video was made by unknown person/persons while Mitt was speaking at a private $50,000-a-plate fundraiser.  Many experts claim the release of this clip may have swayed the election, completely turned it around.

Who was behind the camera?  Who made the secret recording?

Scott Prouty finally ended this mystery when he was interviewed on “The Ed Show” (MSNBC) last Wednesday night.  Turns out the bartender done it.  And he’s from Boston.

Most of you have already seen this part of the video — the part that went viral — it was played and replayed on every news outlet.  Everyone was talking about the “47% video.”

But it wasn’t the “47%” part that bothered Scott Prouty the most.  A blue collar guy and a bartender, Mr. Prouty was more interested in Romney’s attitude toward everyday workers.

From the full video — listen to the heightened tone in Romney’s voice as he describes the working conditions in China.  He was looking into the purchase of a factory in China, and he’s almost salivating as he talks about the cheap labor available there.

Romney’s company, Bain Capital, ended up buying that factory.  They couldn’t resist all those young girls working so hard, and being paid so little.  (For living quarters, twelve girls crammed into every room, with ten rooms to a section — and in each section — all 120 young girls share one small bathroom at the end of the hall?)

What about that “huge” fence . . . the tall fence surrounding the factory, with barb-wire strung along the top, and armed snipers in guard towers above?  That was to keep people out?  Be serious . . .

No matter, Bain Capital was interested in cheap labor.  Slave labor, child labor . . . that doesn’t seem to concern international business companies, as long as they achieve their bottom line and make lots of money.

This is what bothered Scott Prouty, and he made that clear during Wednesday’s interview.

“This was the clip (referring to the China part) that motivated you to go public?” interviewer Ed Schultz asks.

Was he worried about the consequences, what retaliation he might face from releasing the video?

“These were the most influential, the most powerful people in America,” Mr. Prouty recalls, “I had to ask myself . . . do I want to put myself out there?“

But according to Scott, as he debated for weeks what to do, he walked into the bathroom one night and looked into the mirror.  Out of his mouth, without thinking, the words “You coward” came out.

The rest is presidential history.

“Today Mitt Romney lost the election,” (Bloomberg.com; the day after the video was released.)

The fact that a presidential contest was influenced by something a bartender overheard was not lost on MSNBC interviewer Ed Schultz.  Here’s some of what he had to say about the irony:

“Bartender’s are in the service and hospitality industry . . . but they are also some of the best ‘arm-chair’ psychologists you can find.”

“Bartenders are some of the best ‘people-readers’ on the face of the earth.  They can tell if someone’s in a good mood, a jerk, the worst guy in the place . . . one of the nicest people in the world you’ve ever met.  You know how it is . . . they interact with everyone.”

“People confide in bartenders.  They tell bartenders things they might not tell anybody else.”

“What I’m saying is that the bartender sees it all.  The bartender knows people . . . and in a way, you know it’s kind of perfect that the guy who secretly recorded Mitt Romney was in this industry . . . was a bartender.”

On May 17th of last year, I guess you could say bartender Scott Prouty put in a pretty good shift’s work.

Back next with a more typical post . . . more bar stories.

(To view the entire video, click on part one and part two.)