THE KITTEN WHO LIKED TO BE TIED UP (The whole story) 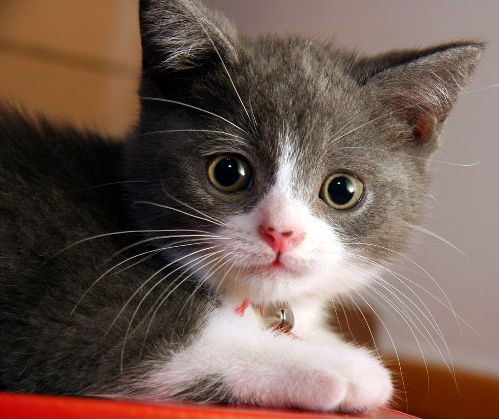 (The first part of this story appeared here in early 2011.  Today’s post will start with a recap before revealing the rest!)

One of the waitresses had brought a cute little kitten into the The Cantina Italiana, trying to find a home for her.  The kitten was so small I could hold her on the palm of my hand.  While we waited for someone to adopt her, we kept her in the office.

She was so frightened, she’d hide under the office desk until everyone was gone, and then edge out cautiously and crawl up onto my knee while I put together the next day’s banks. At least she had a name now . . . we called her “Tina” . . . after the restaurant.

I ended up taking Tina home with me, after it was decided she couldn’t stay in The Cantina anymore.  (See the whole story about burglar alarms, the cops, and a gun-toting owner at the end of this post.)

I’d had a cat before.  A former girlfriend and I owned a cat when we lived together in Tealle Square, so I thought I knew what to expect.  But back then my girl worked days and I worked nights, so our cat was rarely alone.

Now living by myself, and working as GM at The Cantina, I kept late hours.  I’d leave in the afternoon and by the time I came home early the next morning, Tina would be bouncing off the walls.  Frantic, and with eyes as wide as saucers she’d be jumping all over me before I got my coat off.

“Cats need company,” a date told me one night when we’d come back to my apartment.  “You have to do something to help her burn off the energy.”

“Just trail a piece of string in front of her,” my date suggested, demonstrating on the living room floor.  She dragged the long string across the floor, up onto the couch, back across the floor and up onto the chair on the other side . . . back and forth in a figure eight.

“Just drag the string around until she gets tired chasing it . . . then she’ll be exhausted, and back to normal.”

After that, every night when I came home from work, I’d run the string across the floor, back and forth in a figure eight until Tina just gave up.  She’d lie on her back, panting.

Sometimes I’d tease her.  As she lay on her back, I’d dangle the string above her paws and she’d take exhausted swipes at it.

One night as she lay there, swiping with all four little paws  . . . I don’t know why, but I quickly looped the string around her legs.  Like a cowboy tying up a steer.

With her paws now bound together, I began to rock her back and forth.  I was just teasing her a little.

Tina struggled for a second and then a look came over her face . . . if a look can actually come over a kitten’s face.  She began to purr loudly.  With her mouth open and her eyes half-closed, she lay on her back purring like crazy.

From that night on, it became our little routine.  I’d drag the string, and Tina would chase it.  Then at some point . . .  as if saying, “Enough of the foreplay!” . . . she’d lie down on her back in the middle of the living room, with all four paws up in the air, bunched together.  She was trying to make it easy for me.

She’d just lie there on her back, legs patiently raised, waiting for me to tie her up again.

Why I wound up taking Tina home; why she had to leave the restaurant . . .

The reason I originally took Tina home with me — it was decided she could no long stay at The Cantina.  At first, we thought we’d adopt her as the restaurant’s house cat.  We’d put out a bowl of milk and a plate of dry cat food, and at the end of the night we’d lock her in the office. 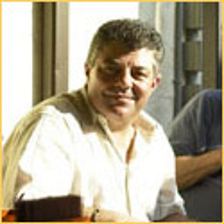 One night the owner, Fiore Colella, got a call from the alarm company.  (Whenever a restaurant alarm goes off, the company dispatcher immediately calls the owner, and the police.)

It was four o’clock in the morning and Fiore lived in Medford about twenty minutes away, but now he got up — got dressed — and headed into Boston.

He took two handguns with him.

Outside the restaurant, Fiore could hear the alarm continue to ring.  He’d driven all the way from Medford, but the police still hadn’t shown up, even with the central Boston Police station only a couple of blocks away.

Fiore waited in his car as the alarm kept clanging.

Finally he decided to go inside by himself.

I have to tell you a little about Fiore — he isn’t afraid of anything.  Once he and some friends were hunting wild boar on a game preserve when a squat, 250 lb. animal came charging out of the bushes at them.

The other guys were running away, climbing up trees to escape . . . but Fiore just stood there as the raging boar charged.  He raised his 45 cal. revolver, and fired twice — BAM!  BAM! — the boar fell dead at his feet.

Another night, Fiore was giving his nephew (who worked as a bus boy) a ride home.  It was two o’clock in the morning and they were on Causeway Street, just before the Tobin Bridge.

They were stopped at the traffic light when suddenly a large, looming man appeared on the dark, deserted street.  He was approaching them fast, now only 10-12 feet away, and then he whipped out a meat cleaver from behind his back. As he raced toward them, he raised the cleaver high as though preparing to smash the driver’s side car window.  A wild man with a meat cleaver only a few feet away!

Fiore calmly lowered the car window.  He stuck a semi-automatic handgun out window and told the guy, “Get the fuck outta here or I’ll blow your fucking head off!”

The guy dropped the cleaver, and ran away like a madman.

When the bus boy told us about it the next day, his eyes became wide with fright again, as though it was happening once more.

Born and raised in Avellino, a tough provincial town in southern Italy, Fiore has ice water in his veins.

Anyway, the police still hadn’t arrived and the alarm kept ringing, so Fiore got out of his car and walked toward the restaurant. He had a gun in each hand.

Inside, he discovered it was only Tina. No wild charging boar, no maniac with a meat cleaver.  Fiore stood face to face with a frightened little kitten.

She’d managed to get out of the basement office by working her way up through the crawl space . . . and once upstairs she set off the motion detectors.

Fiore locked her up again (this time in the liquor room.)  He called the alarm company, relocked the front door and headed back to his car, ready to go home.

Outside the restaurant, it had been an hour and a half since the alarm first went off, but still no sign of the police.

Now Fiore noticed a police cruiser parked behind his car on the street.  “About time!” he must have thought as he approached the cruiser.

“What took you so long?” he demanded as he walked up to the police officer.  It was a woman officer, and she turned toward him.

“What do you mean?” she asked.

“What took you so long to get here . . . they called the station at the same time they called me!”

In his haste, Fiore had parked in a $75 handicapped spot . . . and the officer was writing him a ticket.  As they argued, the police still hadn’t arrived to check on the alarm.

“I have to send something to the Herald about this,” I told Fiore the next day.  Howie Carr had a column in the Boston Herald back then, and I was sure he’d be interested in the ticket story.

But that’s the story of why Tina had to leave The Cantina, and why I took her home with me . . . the kitten who liked to be tied up.