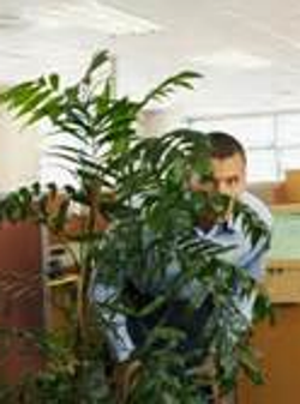 Two waitresses from a nearby restaurant were in the club the other night talking their jobs, and they asked what I thought about life in this business.  When I responded, one of them said, “Well, you’ve always had a positive outlook.”

Years ago I worked in a place that had a large potted plant at the end of the bar.  It wasn’t real . . . made of plastic or something, and it sat on the floor like a Hawaiian-type tree, with large broad leaves.

For some reason it was stuck in a corner at the end of the bar, with a small space behind it between the bar and a side wall.  I only mention this space because it was Sam’s favorite place to hide.

Sam used to come in and try to sneak to a spot where the bartender had just left.  It was a long bar and he liked to complain that he couldn’t get quick service while the bartender was at the other end, busy with the waitstaff.  He really got off on this.

One day I spotted him standing behind the plant.  The plant was taller and bushier than the one pictured above, but that’s basically how Sam looked to me, standing behind it.  He was waiting for a chance to sneak onto a bar stool unnoticed.

I leaned around the corner.

He was clearly disappointed I’d seen him hiding, but quickly recovered.

“What are you here for?” I wanted to say, “Looks like you’re here to play hide and seek, Sam.”  But instead I just smiled, and left to get him his usual cocktail.

Sam played this little game every time he came into the place.  I mean ever single freaking time.  He’d make himself scarce until your back was turned or you were at the other end of the bar . . . then quickly snag a seat, and bitch to the person next to him about having to wait.

‘Why would he do that?” Colleen asked when I told her about Sam.  (This was late last night as we talked on the phone — I try to run all these stories by Colleen first.)

Why?  That’s a good question . . . I’m really not sure.  I think he must have worked in a restaurant at some point, because this was just an old manager’s trick.

I’ve seen managers duck behind the cash register whenever the bartender comes by, only to pop out when that bartender walks away.  Then they’ll sometimes wave their hand as though they really need something . . . but they always wait until the bartender is walking away, back turned to them.

I’ve seen managers talk with a group of people, turning their side to the bartender so that he/she has no opportunity to ask if they want anything.  They’ll talk and talk and talk, until the bartender finally gives up and walks away.  Then they’ll complain at the next meeting that the bartender wasn’t being attentive.

I’m not kidding.  I’ve seen it more than once.

Yes it does, doesn’t it?

This this job is tough enough . . . staying on top of things in a busy bar.  We certainly don’t need someone trying to make it more difficult . . . with artificially created problems.

But it’s a game I’ve seen many times.

Anyway that’s my guess . . . Sam must have been a restaurant manager at some point, and not a very good one.

Sam was so well know for his childish tactic that we began referring to him as “Disappearing Sam.”

I remember one night I spotted him walking in the front door, and decided to play the game along with him.  I kept my eye on him no matter where he went.  I could see him stealing quick glances back at me, waiting for a chance to sneak up to the bar unobserved.

Finally I had to turn my back for something, but when done I immediately scanned the bar to see where he might have gone.  He was just settling onto a stool at the far end, so I rushed down to him.

“Hey, Sam,” I said cheerfully, “How are you?  Would you like anything?”

There was disappointment all over his face.  He hadn’t been able to sneak to a spot I didn’t see.

“Well, can you at least give me a minute to get settled?” he snapped.

“Sure, Sam,” I continued to smile, “You let me know when you’re ready.”

And I left him stewing there, clearly miffed that his little effort had failed.