We’ve all seen it.  At a crucial moment in the game — when everything is on the line — some key player makes a horrible mistake.

(Bill Buckner’s legendary error costs the Boston Red Sox the 1986 World Series title as he allows the ball to go between his legs.  Go to the 00:56 second mark — and weep.)

This happens in our business, too.  Bars and restaurants see really good players, as well as the bad ones, make serious errors they’d like to take back.  Here are three of them I’m remembering today.

Let me be frank, Jeanne was a big girl.  She was around 5’ 5”, and must have weighed 225-250 lbs.  And she was loud.  It was as though she had decided not to be intimidated by anyone . . . so everything she did was exaggerated and in-your-face loud.

When she said — “Why do I have to do the roll-ups?” — you could hear her from one end of the restaurant all the way to the bar at Johnny D’s.

She wasn’t a bad kid, and although her loudness could be irritating I don’t want give the impression that I’m picking on her.  (I’ll relate one of my own embarrassing moments below.)  It’s just that something happened to her one night that was pretty amazing, a little frightening, sad  . . . and yet somehow funny, all at the same time.

Jeanne was in the kitchen getting ready to take food out to her customers.  She must have layered 8 – 10 plates of hot food on a large tray that night.  She was carrying it on her shoulder, using the other hand to hold the edge of the tray.

Nobody but Jeanne would have stacked so many plates on a single tray at one time.

One her way to the platform dining area, she successfully negotiated the two steps up . . . but then she seemed to pause on the platform carpet.  She began to sway a bit, first a little to the left, then to the right.

The large tray on her shoulder began to sway with her.

Back and forth that tray swung, and Jeanne was taking quick little steps, a little dance beneath the moving tray.

The tray swung to the left . . . back to the right again.  We watched in horror from the bar.  Everyone on the platform began to watch.  She was losing control.

The tray swung too far!  Suddenly Jeanne’s feet came out from under her — and for a moment that tray seemed to be suspended in the air.  But then it followed her down . . .

Jeanne landed with her arms and legs bouncing a little.  Her entire large body seemed to bounce up and down, so it looked like something in slow motion.  The plates and silverware clattered all around her like debris falling from the sky.

John B. and I were watching the spectacular fall from behind the bar — and recalling the Hindenburg incident, he solemnly announced,  “ . . . Oh the humanity!”

I’m sorry, I don’t mean to appear thoughtless or cruel.  Fortunately Jeanne jumped right back up unharmed, but she must have been terribly embarrassed.  Anyway, it’s not nice to laugh.

But I  couldn’t help it . . . at the bar, John’s wisecrack had me biting a knuckle to keep from cracking-up out loud.

Steve wasn’t a bad manager, really . . . just a little inexperienced when it involved working in the trenches.

He had the right attitude and a good heart when he came up with a new plan to help the wait staff.

At Johnny D’s on a busy night the customers sometimes can’t spot their waitperson . . . there’s just too many people in the crowd.

Steve wanted something to easily identify them.  Something to immediately let customers know that this person could get them drinks. 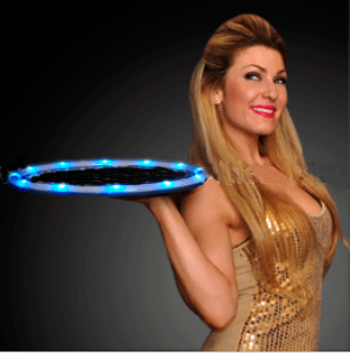 I don’t know if this is the same tray, and for all I know this particular brand might actually work. Ours didn’t.

Of course, the trays were very expensive.

They came as a package that had to be assembled.  Included in the package was a handle that was to be attached under the tray.  It was supposed to make it easier carrying large rounds.

The handles didn’t really work well, and soon all the wait people were taking them off, after spilling too many rounds of drinks.

But the biggest problem was something that the manufacturers apparently hadn’t thought of . . .

The strings of lights circling each tray . . . the small, colored flashing lights . . . those lights weren’t waterproof.

That’s right.  If some beer should spill off the top of a pint glass, or a drink was knocked over onto the tray (or God forbid if the tray was washed) . . . the LED lights simply shorted out.

And once they shorted out, they never worked again.

One by one, tray after tray began to quietly blink out in the middle of the crowd.  Maybe when a server’s lights went out, customers thought that person was simply going off duty.  (Like at a cab stand . . . “Nope their lights are out, we’ll have to wait for someone else!”)

Steve left the club shortly after that, although not just because of the winked-out trays.

My own fuck-up . . .  (I’ve told this story here before, but that was almost three years ago, so I hope you don’t mind me repeating it.)

I was new in town, and The Sunflower Café was my first job in the Boston area.

Having done my time at the service bar upstairs, this was my first shift in the basement club.  It was Christmas Eve; none of the other bartenders wanted to work.

There was a manager on duty somewhere, but I didn’t see him all night.  I was alone behind the bar, and feeling a little nervous.

The evening started with my only two customers somehow getting into an argument that escalated into a table-toppling fist fight.  Later a woman broke down and began to sob uncontrollably halfway through her drink.

More people wandered in and as the place got crowded, a waiter we knew from a nearby restaurant got really hammered and began loudly yelling a surprising, and most intimate confession.

Finally I managed to quiet him down, but the worst part of the night was yet to come.

Around ten o’clock, some guy stumbled down the stairs and wove his way to where I was standing behind the bar.

He adjusted the glasses on his nose.

I felt the eyes of everyone at the bar bearing down on me.

I could hear them all thinking:  “That poor man . . . he has cerebral palsy, and now the bartender is calling everyone’s attention to it!  Rather than just serve him . . . and it’s Christmas Eve!”

Apparently, although the man really did have cerebral palsy, he was also falling down drunk.

Halfway through that first drink, he tumbled off the bar stool and lay helpless on the floor, unable to get up.

He’d probably been shut off someplace else before stumbling in here.

Now the manager of The Sunflower Café suddenly appeared.  As we carried the man up the stairs to a cab, the manager kept glaring at me as if to say:  “What the Hell were you thinking?  How could you serve someone that’s so trashed?”

Dropping a tray full of food, serving a drunk who has cerebral palsy . . . if you play the game long enough these things will happen.  Sometimes you gotta laugh, even when the joke’s on you.  See you all next week.