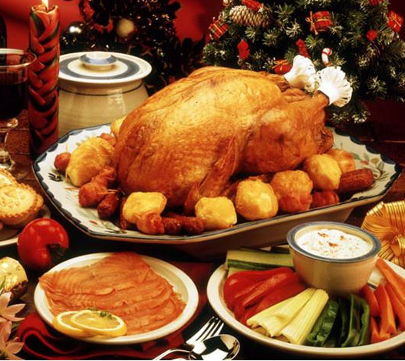 I spent this past Christmas Day with Colleen’s family — what a great time and a wonderful meal.  (Colleen is a great cook . . . trays and trays of appetizers, followed by a twenty-pound turkey roasted perfectly, three kinds of potatoes, Italian green beans, dressing, and on and on.)

Colleen’s Uncle Tommy was there.  It was the first time I’d met him.

When he walked in the front door my first thought was that if he’d come to Johnny D’s, I would have kept an eye on him.

He looked like a tough guy.  Someone who could have just rode up on a motorcycle.  (Tommy told me later that was years ago; he drives a car now.)  He was wearing a black leather motorcycle-type jacket . . . a stocky, broad-shouldered, big-fisted kind of guy who looked to be somewhere in his early fifties.  (I’d later learn he’s actually in his seventies.)

I know The Cantab Lounge well, having spent some time there when I lived near Central Square.  Even now I still hear about it . . . a lot of people go back and forth between the Sunday night blues jam at The Cantab, and our afternoon jam at Johnny D’s.

His brother-in-law owns The Cantab?  Small world, isn’t it?

Then I told Tommy that I had a blog about bar stories . . . and for the next two hours he kept me spellbound with stories about growing up in bars, and about how he and his brothers — John (Colleen’s dad, also known as “Red”), and their younger brother Danny — would raise all Hell back in the day.

Apparently Tommy’s grandfather had owned a bar in Lynn, MA.  It was in a section called the “Brickyard District.”  Named after a real brickyard that had once thrived there, the Brickyard District was the rough part of town, the toughest section in Lynn, with its winding streets populated by Irish and Italian immigrants.

“It was ‘Knuckle City,’” Tommy recalled, “A real tough neighborhood, and grandad’s pub was right in the heart of it.”

(Sorry I don’t have that old photo, but this is how I picture Tommy’s grandfather.)

Tommy described an old photo of his grandfather standing out in front of “Lennon’s Pub”.  Taken around 1910, the photo was of an Irish guy with his tavern behind him, wearing a bartender’s apron pulled up almost to his armpits.  (Tommy tried to get me copy, but he couldn’t find it in time to post here.)

Tommy’s grandfather ran a tough bar, and he did it the old-school way.  He had a reputation for throwing trouble makers right out through the Pub’s front glass windows.  “You can’t be doing that!” the cops would tell him when they finally showed up, “Listen . . . we’re not going to warn you again!”

I suppose not everyone would be interested in a conversation like this on Christmas Day (and many of you may not be interested in this post) — but these are my favorite bars stories.  Stories about the old days.  It’s like someone who loves baseball and enjoys hearing about the early athletes, and how the game was played back then.

Tommy described generation after generation of tough Lennon boys growing up in the Brickyard District, and how they all hung out together . . . from the oldest boys in their early twenties, the middle relatives who often joined them, and then the youngest cousins who sometimes tagged along just learning the ropes.

They’d go from bar to bar drinking, chasing women, and fighting together.  “You’d get in a fight with one of the Italians in the afternoon,” Tommy said, “And then you’d be best buddies later that night.”

“But God help any outsiders who started trouble with either group . . . they’d have all the Irish and Italians joined against them.”

“Red was the toughest,” Tommy told us, referring to Colleen’s dad.  “He wasn’t the biggest guy, but nobody wanted to fight him.”

(And afterward, I know, Colleen’s dad went on to a much-decorated career in the military, during which he was a feared boxer in the U. S. Navy.  See photos at the end of this post.)

Tommy and his crew used to spend a lot of time at a place called Guffer Murphy’s, in West Lynn.

Guffer Murphy was a short, broad-shouldered man with a ruddy face, a really big nose, and a mop of scraggly hair.  Guffer had a piano in his place and several times a night he’d entertain his customers with off-key renditions of all the old songs.  Songs from the 1920’s, Irish ditties, songs from musicals — rousing and raucous bar music. 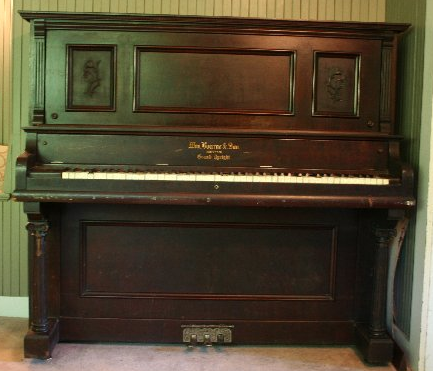 He had a row of different, colored hats hanging from pegs, and he’d stop to put on a new hat before starting each song.

“He was lucky he didn’t bust the keys of that piano . . . the way he pounded them with those big paws,” Colleen’s father added, “He was more gaudy than good, playing with those crazy hats on.”

But apparently Guffer and his rowdy customers didn’t care, and this ruddy-face Irishman would just continue hammering the keys, belting out songs as everyone sang along, glasses raised.

Guffer Murphy was Irish to the core.  Tommy also told me stories about how he quickly ended trouble with a sawed-off pool cue, which he used as a billy club.

“It was a long bar,” Tommy said, “With a long row of stools lined down it.  There was door at each end.”

“When you walked in the front door, all the junkies would be sitting at the near end with their noses running.”

“The next group was the speed-freaks . . . you didn’t want to sit with them because they’d talk your ear off.”

“You didn’t want to sit with the next group either,” Tommy continued, “Because those were the pot-heads . . . and they’d just want to hug you.”

One afternoon Tommy and another of the Lennon family, Paul, were drinking at The Crystal Lounge.  They were alone at the bar with Ernie, all of three of them cousins, when a big guy in his twenties walked in.

“Give me a freaking beer,” the big guy bellowed before he’d even taken a stool.

“Hold on now,” Ernie said to him, standing there talking with his relatives.  Ernie had a low, raspy voice and everything he said was sort of mumbled.  “Hold your horses,” he muttered with a wave of his hand, “I’ll be right there.”

A minute later the big guy slammed his palm down on the bar.   “Give me A FUCKING BEER down here!!!” he yelled.

Ernie walked down to him, and the guy started giving him lip.  “Give me a fucking beer,” the guy yelled in Ernie’s face, “. . . Or I’m coming over the fucking bar!”

The guy looked like he was about to get up.  Maybe he intended to come over the bar . . . but Ernie reached down, grabbed his billy club, and he whacked the guy across the forehead.

The guy went down like a sack of coal, face down on the bar.  He was out cold, but he didn’t fall off his stool because his chin had landed and caught on the inner lip of the bar rail.

He was still leaned forward on his bar stool, with his chin now resting on the bar.  He was hanging there motionless.

Ernie went back to his cousins and continued the conversation as if nothing had happened.

“Geez Ernie,” Tommy said, “You could have killed the guy . . . aren’t you going to call an ambulance, or something?”

“Naw,” Ernie replied, “When he wakes up, I’ll just tell him to leave.”  And he picked up where he’d left off talking.

Tommy and his cousin Paul finally convinced Ernie to call an ambulance, and the police came into the bar with the paramedics.  The cops were more angry than surprised.  “You and your grandfather!” one of the cops yelled, “You’re two peas in a pod!  You can’t keep doing this, Ernie . . . this is the third time this month!”

As the ambulance drove off, and the cops left, Ernie was mumbling to himself about all the restrictions they were trying to place on him as a business owner, and how it just wasn’t like the old days.

But my favorite story from Tommy was the “Hold that Chair” story, from a place called The Lynn Tap.

The Lynn Tap was popular with Tommy and his buddies because it was owned by an friendly Italian who would let them run tabs until payday.  “There was always a big line on Friday as everyone cashed their paychecks and paid their tab,” Tommy recalls, “I don’t think anybody ever stiffed the place.”

Anyway, one night at The Lynn Tap, two large guys over six feet tall and 200 lbs. each got into an argument.  The guy who was a regular didn’t want any trouble, but the new guy kept pushing him.

“Hey,” the regular said, “I’m not looking for trouble.”

But the newcomer kept needling him, until finally the regular turned to him and said:  “Look, I have to warn you . . . I know Karate.”

“I don’t give a shit about Karate!” the new guy snapped.

“I just had to warn you,” the regular said.

“Tell you what,” the regular continued, “I’m going to give you a little demonstration, and then if you still want to fight, so be it.”

The regular stood up and pulled over a wooden chair from one of the tables.  It was one of those classic “Captain’s” chairs with an arched back, and a solid wooden seat probably two inches thick.

The regular guy lined the chair up in front of him.

He lifted his open hand, and brought it back down slowly to just touch the thick wooden seat.  He was preparing for the Karate chop.

As he raised his hand a third time . . . now just about to crack the chair seat into two pieces . . . he paused.

The newcomer grabbed the top of the chair with both hands, and held it firmly as the regular lifted his open hand up one more time.

Then, as his hand came down fast . . . instead of hitting the bottom of the chair . . . the regular punched the newcomer right between the eyes.

“As he was going down,” Tommy told the story now, “You could see the expression on his face — ‘Oh no, I just got suckered!’”

When the new guy came back to consciousness, they hosted him back up onto his bar stool . . . and the afternoon of drinking continued.

“After that, it became a catch-phrase,” Tommy told us.  “Whenever there was going to be trouble, one of the regulars would say to the wise-ass — ‘Hold that chair!’”

“All the regulars would laugh, and the new guy would get nervous, wondering what was going on.  If he asked what it meant, we’d just tell him — ‘You don’t want to know!’”

I have to say it was a most enjoyable Christmas afternoon.  Tommy had some great stories.

(Below are photos of Colleen and her father, and then of her two uncles, Tommy and Danny.)

Colleen and her dad (believe it or not, he’s in his late eighties.)

A recent photo of Tommy, on the left, and his younger brother Danny. (Tommy’s in his seventies; Danny is a few years younger.)