HOW MY COLLEGE ROOMMATE RUINED MY LIFE 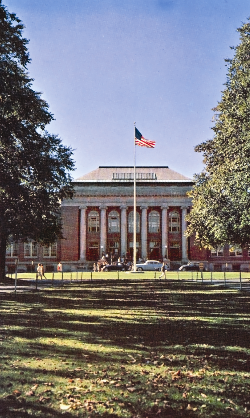 I showed a lot of promise as a college freshman. With the exception of a “B-” in a mandatory swimming course, I had straight “A’s.” My grade-point average was 3.95 out of a possible 4.0 . . . I finishing second in a school-wide speaking contest, wrestled on SUNY Cortland’s freshman team, and was nominated as one of the college’s outstanding freshman.

So how is it that with all this promise–I ended up changing my major three times, dropping out of school twice, and accumulating some 128 certified credit hours, without ever graduating?

Looking back, I have to blame my freshman roommate, Kyle Richenock.

OK, maybe some small, small responsibly might be my own, but mostly it was Kyle’s fault.

I remember when I first stepped into the room we would share at our freshman dorm, Hendrick’s Hall. Kyle had already moved in and he was lying with his feet on his bed, his hands behind his head, watching me. He was sizing up his new roommate.

I fell head over heels for her. When we went together to the New York State Fair, which is held in Syracuse NY, we spent most of our time in the model home displays, looking at living room arrangements and talking about the day we’d settle down and raise a family.

So went I finally did go to college, my motivation was different than all these stoned-out dudes. I remember an all-dorm meeting with the Senior Resident, and he was asking if anyone had any questions. A guy in the back shouted out, “Hey, since we can’t have girls in our rooms, where does one go to get laid?”

See what I mean? That thought had never crossed my mind. The only thing I was worried about was how to make it to the weekends, when I could drive back to Syracuse and see my girl.

In the dorm room that first day, Kyle was still watching me as I began to unpack my stuff. The first thing I did was take out the 8” x 10” framed photo of my girlfriend; I set it on top of the dresser. Then I took out her high school tassel and draped it over one corner of the picture. My high school tassel was draped over the other corner. 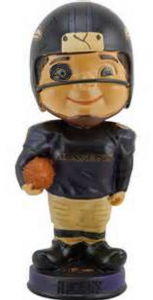 I took out a few knickknacks and figurines that my girlfriend had given me–a little plastic football player with a black eye, two little bears cuddling, that type of thing. I put them around the picture.

As I worked, I’d step back now and then to look at the dresser top, and take it all in.

Like I said, I wasn’t a typical college freshman.

I called my girlfriend that night, and in fact I called her every single night from Hendrick’s Hall. And each night after we talked, she’d write me a letter so that every single day that freshman year, I got a letter from her. I mailed one to her every day, too.

The weeks went by, and while all the other freshman males were downtown drinking in the college bars, I stayed in my room and studied. I wanted to graduate and be a good provider. (Now you know the truth about my high grades–I cheated, by actually studying.)

I had talked the college administrators into letting me bring a car on campus, something that most freshman back then couldn’t do. I might have told them that I had a sick grandmother who I had to visit. There was no shame in making sure my girlfriend and I at least had sex on weekends. I drove the thirty minutes back to Syracuse every Friday night, until wrestling season started.

While wrestling I still maintained a focused lifestyle, resisting the efforts of Kyle and his friends to get me downtown, where the bars were. Kyle had a lot of friends. He was a big man on campus. He played football and lacrosse for the Cortland freshman teams; he was a big, smart guy with a great sense of humor.

And he had this ridiculously infectious laugh. When Kyle laughed, everyone within hearing distance laughed along with him. He could be telling you that your mom just got run over by a truck, and if he laughed as he said it, you’d laugh, too.

Kyle like to hit on all the cute coeds. Somehow, even though he was a freshman, he ended up on the grill at an all-school barbeque. Kyle was flipping hamburgers when this stunning coed, Barbara Stilton, walked up. She was Playmate gorgeous, with the body of a gymnast. She had blond, pixie-cut hair, and she wore this incredibly sexy frosted lipstick.

Kyle started to chat her up, leaning forward. He kept smiling and laughing, and holding her attention. Then the sizzling smoke started to rise up between his fingers. He had leaned forward on the grill, with his palms down as he entertained her–and now he yelled and lifted his red palms up–but he was laughing. And of course, everyone laughed with along him.

One of Kyle’s best buddies was a guy named Dominick DeNapoli. Dominick was a lineman on Cortland’s freshman football team. He was a big Italian kid from a tough section of Binghamton NY, who despite his size was a math major, obsessed with thinking out everything logically. His favorite character on Star Trek was Spock.

One day Dominick was called in to talk with the college administration. (An irritating young freshman on the third floor might have been intimidated, lifted in the air, when he gave Dominick some lip.) Now someone in the Dean’s office was going to straighten Dominick out, in an intellectual, administrative way.

His words alone don’t really describe his whole answer. As he spoke, Dominic had put his hands on the end of the chair’s arms, and now he pushed his body back into the chair–and the force of it broke something in the chair. The legs of the chair separated and Dominick had to jump up quickly to avoid falling to the floor with the clattering chair parts.

The administrator said they could talk another time.

These were the guys who kept trying to get me down to the bars to raise hell with them. They were always having a blast. They had all these friends. Me . . . after months at the college and in the dorm, spending all my spare time studying . . . I hardly knew anyone. “This is my roommate,” Kyle would introduce me, and that’s how I was known. Now and then I’d hear some guy tell another kid, “Oh, that’s Kyle’s roommate.”

As soon as wrestling season ended, I began to weaken. “One beer,” Kyle kept saying. “One freaking beer isn’t going to kill you!”

You know how this goes . . . the first time, it was just one beer. And then it was a couple of beers, and gradually I began to learn what a wonderful new world it was, hanging out in the bars. I didn’t drink in high school; I was only interested in sports. Now this was amazing–the carnival atmosphere of the bars, the camaraderie, the cute coeds. There was a spirit of adventure. Compared with studying in the dorm, this was like being on the high seas.

To make a long story short . . . remember that scene with the dresser top “shrine” on the first day with Kyle as a roommate?  Well, here’s another, contrasting scene that happened after a year of rooming with Kyle. I remember most of the details . . . 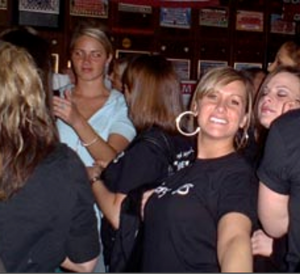 Scene from The Tavern

I would finish my last spring final before Kyle finished his, so I told him I’d meet him at a joint called “The Tavern.” At this popular college bar, they were having an end-of-finals special–a pitcher of beer and a bucket of steamers for some ridiculously cheap price, maybe five dollars. Steamers and pitchers of beer, after a long freshman year. What could be more perfect?

I ordered another round.

I kept drinking and drinking, and by now I was pretty trashed. For some reason, when an old Bob Dylan song began playing on the jukebox, I got up and stood on the booth table. Balancing precariously, I was singing at the top of my lungs along with the jukebox: “Everybody must get stoned!”

I was singing on the table top, gyrating my hips, pants around my ankles.

The bouncer, named Jumbo, came out of nowhere. He picked me up and carried me in the air toward the door . . . and the next thing I knew I was sprawled in the gutter in front of The Tavern. 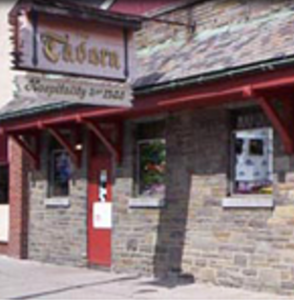 Lying in the gutter, my bare ass was cold, so I inched my pants back up most of the way, with a series of pulling-humping motions. Exhausted now I just lay there, unable to move.

There’s a famous quote from Oscar Wilde: “We are all in the gutter, but some of us are gazing at the stars.” Well, I wasn’t on my back looking up. I was face down in the gutter and perfectly content at the moment to stay that way. I listened to the voices of students, the opening of the door as they went into The Tavern.

At one point, I thought I heard a familiar voice, and then that unmistakable laugh, and everyone as always laughing along. They seemed to stop. I heard footsteps gathering not far away.

And then I heard The Tavern door open, and they went inside.

The next year when Kyle, Dominick, and I got an off-campus apartment, the madness didn’t stop. I ended up changing majors several times, dropping out of school twice, and after the second time–now totally enamored with the bar life–I became a bartender.

Kyle, I know you’re out there. Someday lift a pint for me . . . as you look back on your successful career in sports broadcasting, working as you do for that well-known network. And just remember, Kyle . . . you ruined my life. (Only kidding, of course. Great to talk with you the other day, buddy!)