TWISTS AND TURNS WITH A BOSTON PLAYWRIGHT 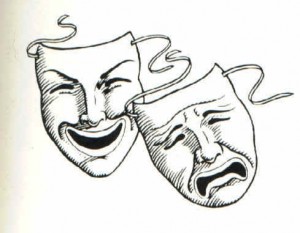 When I first moved to Boston, I worked at The Sunflower Café in Harvard Square and it was a trip. Aside from the expected swarms of students, our crowd included artists and musicians, an occasional Harvard professor, guys just looking for hot chicks, and a collection of regulars who were often strange, but always entertaining–characters such as Disappearing Sam and Howie.

Back then Harvard Square was like a permanent circus, and the Sunflower Café was one of the feature attractions.

Sitting at the bar in The Sunflower one night, I met a Boston playwright. I’d had the night off and was pretty-well buzzed when this attractive woman with long, curly brown hair sat down on the barstool next to me. We started talking. She told me she’d been an actress off and on, but over the last several years had been mostly writing. One of her plays had won a prestigious Boston award.

It was an interesting Harvard Square conversation, perhaps more intellectual than a typical bar chat, but she was also quite foxy with a free-spirited style and daring eyes. So I bought her a drink. We continued talking and after a while I bought her another drink. Then I asked her back to my place.

As I said, I was feeling no pain–we were both in our late twenties, hitting it off really well, and after all this was Harvard Square. I tried to be smooth about it. I told her that I’d been here quite a while and it was probably time for me to head home. “Want to join me?” I asked.

“Don’t you think you’re pushing it a bit?” she asked still smiling.

OK, so she put me in my place. But she’d done it in a playful manner–and I was impressed she’d been so refreshingly direct. “Go home and fuck?” I thought that gave me an opening to come back just as directly.

“Well,” I continued, “why don’t at least you give me your phone number, then?”

“We should go out this week,” I said. “We can have dinner someplace nice, or enjoy a movie at the cinema, have a late drink in the square . . . and then go home and fuck.” For some reason that sounded like a good response at the time.

She laughed again. She took it in good humor, not offended at all. “We’ll have to see about that last part,” she said, scribbling on a cocktail napkin, “but here’s my number.” And she handed me the folded paper.

That was how our relationship began and that’s how it would continue for as long as it lasted. Suzanne had this light-hearted, laughing, direct approach to everything. She dressed more conservatively than the girls I usually dated–even though the same age, she was more of an adult. She was wicked smart, an author and a critic, but once in bed she was unstoppable. There was fantastic contrast between her serious/calm/professional demeanor and what she’d do once naked and getting down to it.

Once I woke up in the middle of the night at her place. I couldn’t fall back to sleep so I just lay beside her, thinking. She stirred awake too, and since I was clearly going over something in my mind, we began talking about a book I’d been reading. After a few minutes she said, “I’m always going to remember you as the man who woke me to talk about Nietzsche.”

For a split second I felt a bit of intellectual pride . . . then I realized she was actually pointing to what I hadn’t woken her up to do. I smartened up and when we were finished, I slept like a baby.

We continued to see each other casually. I might give her a call, or she’d stop at the bar to say hello, and we’d hook up that week but maybe not the next. After quite a few months of this, I was headed back to my apartment one night following many after-hours drinks with the rest of The Sunflower staff. When I got to my building’s front door, I realized I didn’t have my key with me. I’d thrown on a new pair of jeans rushing out to get to work on time, and had forgotten to take it from the old pants.

By now it was 4:00 a.m., and I was a somewhat inebriated bartender locked out of his own apartment. I decided to use the fire escape to go in through my second-story window. I had to stand on top of a garbage can I’d hauled over in order to jump up and grab the last rung of the raised metal bars. I swung there for a minute trying to pull myself up, and then had difficulty working up through the ancient iron grating.

On the grated landing outside my apartment, I remembered that the window was the roll-out type that opened on the side, not one where I could just slide up the bottom pane. I tried to pry it open but the window wouldn’t budge. What was I going to do now? Should I just break the window to get inside? Instead I headed back down the fire escape.

I was hanging by both hands from the bottom rung again, just about to drop to the ground when these sharp flashing lights began blinding me. “Freeze!” some deep male voice boomed, “Don’t move!”

One of my neighbors must have heard someone trying to break in and called the police.

Once I hit the ground, the two cops were all over me, each with one hand on their now holstered guns. It was a simple enough explanation once I showed them my driver’s license with this same address listed below my name.

“Sorry to cause any trouble,” I told them, “I think I’ll stay at a friend’s house tonight.”

When I got to Suzanne’s apartment, it took quite a while for her to answer the buzzer. She was in her bathrobe, hair all rumpled, only half-awake after being disturbed at this hour. She put one hand to her head as she listened to my explanation. “Well,” she said sleepily after a minute, “I guess you can crash here tonight.”

“But you’ll have to sleep on the couch,” she said. Then she glanced toward her closed bedroom door. Damn, that’s when it hit me. What a dope I was. I’d never stop to consider she might have company.

The antique clock in Harvard Square watches everything.

Then the bedroom door opened and someone was stepping out into the living room with us . . . it was a twenty-year-old blond woman. Bathrobe tied loosely at her waist, she was squinting around the room with rudely-awakened eyes, her hair flattened on one side. She looked first at Suzanne, then at me.

I felt like such a jerk. The next morning when they got up I pretended to still be asleep, rolled over facing into the couch’s back. I stayed that way until they were in the kitchen fixing breakfast, and I was still lying with my back toward the living room as I heard them leave and lock the door.

Suzanne returned to her apartment during a break from the theater where she worked. She wanted to talk.

“You got me in a little trouble last night,” she said. “Things are getting serious with this woman . . . and I really hadn’t told her anything about you.”

“She called me a ‘humiliated heterosexual,’” Suzanne laughed. “I told her we were just friends, but I don’t think she bought it.”

“Anyway,” Suzanne continued, “I think we’d better cool it, at least for the time being. She and I are becoming more involved now.”

So after that, Suzanne and I were just friends. At first we’d get together for dinner or drinks every week or so, then it became once a month, and after a while over the years I just lost touch with her. But I still remember leaving her apartment that afternoon, after having disturbed her in the middle of the night. I remember walking down toward The Sunflower Café, thinking, “Yeah, Harvard Square can sure be a trip.”

2 Responses to TWISTS AND TURNS WITH A BOSTON PLAYWRIGHT