THE ENVELOPE (joking around, then serious gangster style)

Last week I was working my usual Sunday night when one of brunch bartenders walked through the door.

We always have three bartenders for the Sunday brunch and as it slows down–first one is cut, then another–until by the time I come on at night there’s only one bartender working. The remaining guy counts the afternoon’s tips, and then leaves envelopes for the other two who left early.

I figured that’s why this brunch bartender was here–to pick up his tips from the previous shift. “You want your envelope?” I asked as he came up to the bar.

He didn’t say a word, just nodded. I reached into the drawer for his envelope, and handed it to him.

Three customers were sitting at the bar watching, and they all had a strange look on their faces. They were curious, but it was as though they didn’t want to watch too closely . . . because maybe something a little shady was going on. “You’re here for your money?”

The bartender reaching for his envelope was thick-necked, broad-shouldered Irish guy. During the week he’s a probation officer, but I suppose if you watch at lot of movies you might have thought this was some kind of payoff–especially given the history of the neighborhood, which back in the 1970’s and 80’s was gangster hangout for the Irish mob.

“He comes in every week like clockwork,“ I said under my breath to the customers, unable to resist stringing them along.

“He never says a word,” I continued. “I just hand him the envelope and then he walks out.” Meanwhile the probation-officer/bartender was standing there with a smirk on his face, shaking his head because I was feeding them this line.

“It’s better this way,” I explained to the customers. “No one wants any trouble.”

The customers looked at me; they looked at the guy with the envelope. They had to know I was just kidding . . . right? But their eyes were a little wider than normal, and their heads were set back a bit on their necks. They weren’t really sure whether I was serious or not.

I explained the “tips in an envelope” thing as the brunch bartender was leaving–he still hadn’t said a word, just the little smirk because I’d been busting balls. They all got a chuckle out of it.

Anyway, that reminds me of another envelope story . . . and this one wasn’t simply clowning around.

Years earlier I was working in the North End, Boston’s Italian section. We had a group of connected guys who hung out at the bar, but they always treated the place with respect. And they treated me well, once they were comfortable I wasn’t some kind of undercover cop–this was not too long after the Donnie Brasco thing in New York City.

One night one of the wise guys, a friend of Joey Cigars, walked into the restaurant and came up to the bar. “You know Dan Shoes,” the guy said. It was more of a statement than a question.

“He’ll be coming in here later,” the guy continued. “Give him this.” And he pulled out an envelope from inside his coat. He held the envelope toward me.

As I took the envelope I realized it was full of cash. It was at least two or three inches thick, and these guys only dealt with one-hundred-dollar bills. 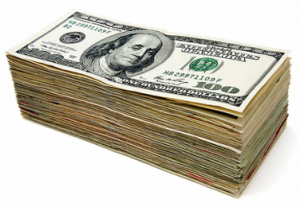 When you’ve been tending bar for a while, you have a feel for the size of a wad of money. You know how thick a pack of banded bills feels–like a stack of one hundred banded one-dollar bills. If these were all one-hundred-dollar bills, there was at least $20,000 in that envelope.

“Just give it to him,” the guy said looking right at me. “Any problems with that?”

I started to get paranoid. Why had he handed the money to me? What if some of the money ended up missing? Maybe the guy was supposed to leave Dan Shoes $20,000 but there was only $15,000 in there. Would I be held accountable?

What if Dan Shoes decided to skim off a few thousand for himself, and then later told everyone that’s all that was there?

I put the envelope in the drawer under the cash register. The envelope was only loosely sealed so I pried up one corner. Yup, all one-hundred-dollar bills.

What the fuck! I was nervous as hell. How did I get stuck in this position? There was never a thought in my mind of taking even one of those bills, but I was worried about now being responsible for this envelope. What if someone else knew I was holding the money, and decided to come in and take it before Dan Shoes showed up?

We kept a loaded gun, a .45 magnum revolver in that drawer. Holding it low in the drawer, I now flipped the chamber open and spun it once to assure myself it was still fully loaded.

Endless possibilities ran through my mind for the next half hour, all of them bad. Then Dan Shoes walked in.

“Somebody leave somethin’ for me?” he asked when he came up to the bar. I handed him the envelope, and he walked out without another word.

And that was it–I never heard anything more about it.

But the next time Joey Cigars came into the place, he seemed friendlier than usual, and I wondered if I’d passed some kind of test. More likely, it had just been convenient for them to do it this way, and after all I was the bartender at the place where they hung out . . . so why not?

8 Responses to THE ENVELOPE (joking around, then serious gangster style)